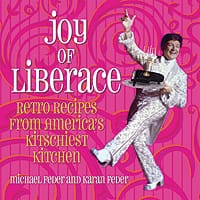 Marking the 20th year since Liberace died, Joy of Liberace, Retro Recipes from America’s Kitschiest Kitchen includes such dishes as Flamboyant Flambé of Sirloin. A Palm Springs resident, Liberace entertained for more than 20 years at Riviera Hotel and Casino in Las Vegas. The hotel’s chefs created more than 75 recipes under the concept of Bling Cooking. The cookbook includes never-before published photographs of Liberace. Yoshitomo Nara’s 4-foot-tall Your Dog sculpture that went on exhibition this summer at Palm Springs Art Museum was “a harbinger” of the cutting-edge art to follow, says Executive Director Steven Nash. On Oct. 17, the museum opens its first video-sound installation, The Crossing (1996). “It may be the most famous, most important video installation made, and it certainly is one of [artist] Bill Viola’s masterpieces,” Nash says. Viola’s work appears in one of two museum galleries renovated during the summer.

Ric and Rozene Supple, owners of Camelot Theatres, have traded the corner of Farrell and Baristo roads with Palm Springs Mall for space north of the theater, where they plan to add two theaters and create a nonprofit cultural center. The center will focus not only on film, but also on theater arts, music and dance, fine arts, literature, and culinary arts. The Supples are endowing the center for perpetuity.

The Charles Schwab office in Palm Desert knows how to get its investors’ attention. Once or twice a month, the firm hosts 15 to 20 clients at Cork Tree California Cuisine. Following an investment presentation, guests enjoy a three-course dinner with wine and take home Chef Herve Glin’s recipes. “It’s like an Emeril live,” says General Manager Jason Hollida. The marketing events run Schwab around $140 a person. To complement our current group of Influencers in this issue, we take a look back at architect William F. Cody, who was photographed for Palm Springs Life in his office in September 1964. Cody’s designs (both alone and in partnership) for some of the valley’s most iconic buildings — including the Del Marcos Hotel, Eldorado Country Club, Palm Springs Public Library, and St. Theresa Catholic Church — still carry tremendous influence with current architects and lovers of modernism.