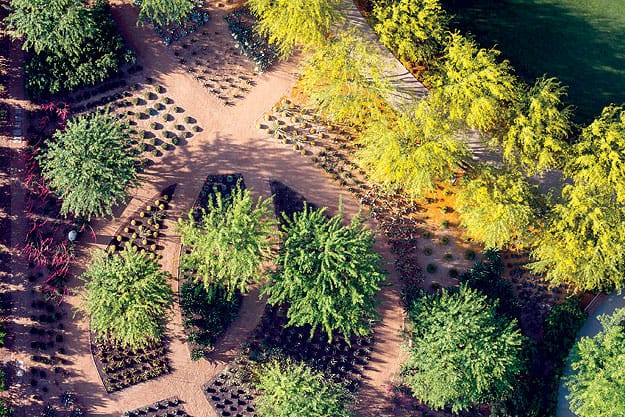 Sunnylands Center & Gardens’ landscape architect, The Office of James Burnett in Solano Beach, won a 2012 American Society of Landscape Architects Professional Award for the 9-acre gardens in Rancho Mirage. From 600 entries, 37 projects received the coveted award. An overhead view of a portion of the Sunnylands gardens graced the October cover of Landscape Architecture Magazine, and Burnett spoke about the project in his keynote address at last month’s annual conference of the Association of Architecture Organizations in Dallas, Texas.

You’ve played on one or more of his local courses (Classic Club, Indian Ridge Country Club, Mountain View Country Club, SilverRock Resort, or Tradition Golf Club). You’ve dined at his eponymous restaurant in La Quinta. Now you can own a piece of Arnold Palmer — that is, a bronze replica of his Congressional Gold Medal. In September, the United States Mint began selling 3-inch and 1.5-inch Arnold Palmer medals. Congress recognized the golf legend not only for his 92 national and international championships, but also for promoting sportsmanship, for his service in the U.S. Coast Guard, and for his service to charitable causes. Cellist Ray Kelley’s talent for creating themed music through his company, Resort Music, earned him an invitation to create a “Soundscape” for the new MAX Atria meeting, convention, and exhibition venue at Singapore EXPO in Singapore, China. The music plays continuously, transitioning from morning to afternoon to evening tunes. According to David Wareing, director of marketing for Singex Venues, which manages Singapore EXPO, the customized Soundscape “resonates with our partners and clients, complementing and enhancing their event experience with music that reflects the diverse mood fluctuation felt during the course of a given day.”

One for the Road

Food Network Iron Chef Jose Garces hosted a five-course dinner in Palm Springs at The Saguaro hotel’s Tinto, one of the 15 restaurants the Philadelphia-based chef owns. Each guest received a copy of Garces’ new cookbook, The Latin Road Home, which includes dishes from five countries that have contributed to his culinary repertoire: Ecuador, Spain, Cuba, Mexico, and Peru.

Susan Rosser of Rancho Mirage has written The Boy on the Lake (Morgan James Publishing), a true story about a boy diagnosed with brain cancer at the age of 13. With his mother, Trevor Schaefer became an advocate for children with cancer and a champion for the protection of small communities from environmental contamination leading to disease clusters. Rosser previously co-authored Just Desserts and A Matter of Betrayal.

Anne Stinnett of Palm Springs has published I went to Palm Springs and all I got was Three Dead Blondes (Blue Eye Books). The novel follows Evin Hart, a young woman who returns to her mother’s home in Palm Springs to get away from a miserable independence and then finds herself tangled in the loose ends of her stepfather’s affair.