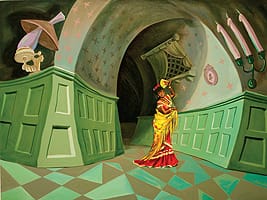 Tragedy follows many great artists, and Pedro Álvarez was no exception. The Cuban painter who emerged during his nation’s prolonged economic crisis following the 1991 collapse of the Soviet Union, Álvarez took on subjects important to Cubans and to many others interested in Cuba and its art.

In 2004, Álvarez, then 37, died after falling from his hotel-room window in Tempe, Ariz., where he had opened an exhibition — Landscape in the Fireplace — a few days earlier at Arizona State University Art Museum. The medical examiner’s office ruled his death a suicide.

Álvarez, who split his time between Havana and Malaga, Spain, was at the forefront of a movement that made political statements through irony and cultural references, says Tyler Stallings, curator of The Signs Pile Up: Paintings by Pedro Álvarez, opening Jan. 26, 2008, at UC Riverside Sweeney Art Gallery.

The global appeal of Álvarez’s work manifests in how he dealt symbolically with global issues, juxtaposing pop culture references, such as images from The Simpsons, against traditional Cuban images, such as 19th century peasants and troubadours, punctuating cross-cultural influences between the United States and Cuba.

“In the lush Cuban landscape, black slaves gaze on, puzzled by the juxtapositions,” the Arizona museum asserted. “Over all is a monochrome green of American money, the currency of exchange on an island that officially despises capitalism.”

Located in the heart of downtown Riverside’s historic Mission Inn district, Sweeney exhibits provocative contemporary art and presents programs that are accessible to the community.