Jason Stuart says he played the character Hank as if "someone had their hands around my neck the whole time."
PHOTOGRAPHS COURTESY THE FILM, HANK

Jason Stuart has reached a point in his acting career where he is that guy, the one whose versatility gains notice both by the public and those in the industry for being able to successfully navigate the straight and gay worlds.

“So I play villains, managers, hotel clerks, detectives, and private investigators,” says Stuart, an openly gay actor who lives in Los Angeles but is in town for the Palm Springs International ShortFest for his latest role as Hank in a 17-minute film of the same name from young director Hongyu Li. The film screens at 1:15 p.m. today (June 19) as part of the Coupling and UnCoupling genre of films at the Camelot Theatres.

“That's what I've played recently,” Stuart continues Monday while we talked at Sherman’s Deli. “So I play guys that are completely different. And that's been my fantasy. Dustin Hoffman is my favorite actor. And I always wanted to be like him and play all these different parts.”

Li approached Stuart with the part of Hank after watching his performances as Joey the doorman in Tangerine, a 2015 comedy-drama about a transgender sex worker, and as a southern plantation owner in director Nate Parker’s 2016 remake of Birth of a Nation — the latter Stuart’s greatest breakthrough on the screen as an actor.

“So from getting that I could play a white, heterosexual Christian plantation owner in 1831 and an irritated Jewy kind of New York manager of a night club in West Hollywood, he thought that I could play the very sweet, quiet guy in Hank,” Stuart says. “Which I absolutely loved, to the bottom of my heart, because what that's about for me is that he said, ‘Okay, this guy is a good character actor’.”

The film screening in Palm Springs speaks to a 15-year relationship between Hank and Tommy, who decide to open their relationship and what that means to them as individuals and as a couple. Stuart, who cut his teeth in L.A. comedy clubs for more than 30 years and still performs before making the move toward film, spent many years coming to Palm Springs when his mother lived here. He’s contemplating the idea of moving here himself as he shares more with me about Hank, Birth of a Nation, and his book, Shut Up, I’m Talking: Coming Out in Hollywood and Making it to the Middle.

How much input was Li willing to let you have with this character Hank?

I read the script, and I liked it. I wanted to talk to him and say, ‘Hey would you be open to a little improv. Would you be open to me... us working on the script a little?’ And he said yes because he speaks a different language than the script was written, in a sense. He speaks Chinese. So, some of things needed to be changed, the flavor. And also I had him cut a lot of the dialogue, which is weird, you never think an actor like me would say that. I mean look at me. But I thought that this character, in my mind, was someone who didn't have a voice. 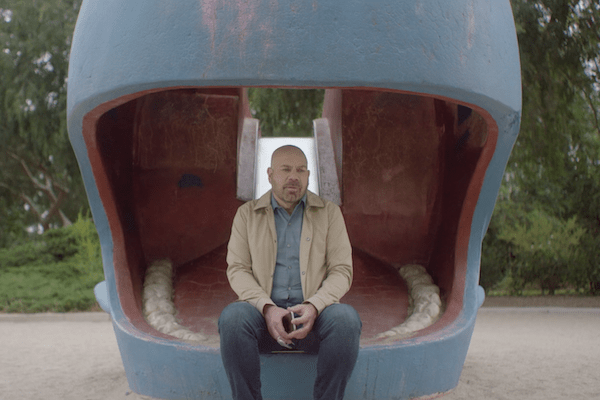 Is the prep for a gay character versus a straight character different?

No. This was a harder character for me to do, because I wanted him to be very simple. I didn't want a lot of extra movement, I wanted a quiet somebody that couldn't speak. Like someone had their hands around my neck the whole time. That's the way I sort of played it. I heightened my voice, my voice in the film is higher than my voice usually is.

Why did you do that?

I worked on lowering my voice a lot for the last 10 years, for different things, because when I was younger I was so scared all the time. I think that's why my voice, because I was always afraid that someone was going to fire me.

How will people be able to relate to Hank, gay or straight?

I think the idea of men being in a long term relationship and whether the relationship is going to be open or not, is really a big thing for us, and it's not a problem, but it's a piece of the fabric of who we are as men, that doesn't happen in straight relationships in the same way, because they basically just cheat on each other. We don't do that most of the time. Most of the time we'll say, ‘Hey, we want this to happen.’ And a lot of the time people don't agree. That's what happens in this film. So it’s like what happens when people get older, and we're not as good looking as we used to be, or we're not as young as we used to be. It's the same with straight men, wanting to trade you in for a younger model. That happens with men all the time, straight or gay. The idea of how that all works. Some people go through that and they stay together.

Do you see a spillover from what you do as a comedian to help you as an actor?

It's interesting, so most people would think it would spill over, but when they see you do comedy and go, ‘Oh, this guy would be great for this.’ But most people don't do that, because they see you as a gay person now, a funny gay guy, you know powerful in that way, and I don't play many of those parts because there aren't many of those parts to play. That's what I loved about this film is because I got hired because I was a good actor, not because I was the right type. Not because that's who I was. So, in stand up right now is a place for me to have fun and make money but it isn't really, it doesn't often get me parts.

The title of your book, what does Making it to the Middle mean?

I think now it means my success. I didn't get an Oscar nomination, but I got to play an incredibly big supporting role in Birth of a Nation, eight scenes. I don't even know how to tell you what an extraordinary experience that film is. Every time I think about it I get emotional. Just the idea to be in a film, to have a great part, to have a part not been cut. To be a part of a story that I so believed in. To have people come to a movie theater and see a film with a different point of view then they're used to seeing something.

For tickets and information on the Palm Springs International ShortFest, visit psfilmfest.org.

For more on Jason Stuart and his upcoming films, visit jasonstuart.com.