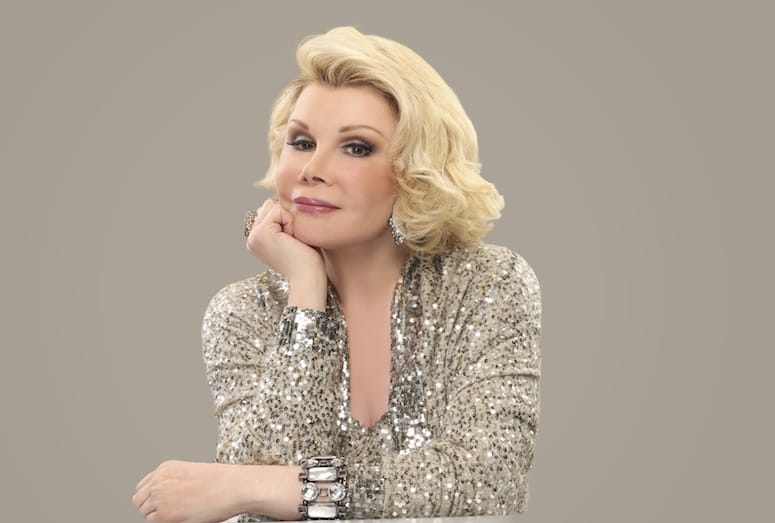 Joan Rivers has said her act consists of three ingredients: her gown, two spotlights and a microphone.

You might not think lighting means much to a comedy act, but Rivers says it's critical for female comedians.

"The lighting should be very bright for comedy because the audience wants to see it," Rivers says. "The microphone has to be very clear. That's what makes comedy, comedy. I always like the audience dark because people are less self-conscious if they know they can laugh at something without everyone seeing they're laughing at something. Those are the primary things that make a good comedy show. All the rest is extra."

Rivers' brand of comedy can sometimes make her audience cringe, but in more than 50 years on stage she has also been one of the first to point back at them and acknowledge they agree with her at some level.

"I do what I think is funny, and at this point seriously if someone thinks it's offensive and they don't know me by now, then they shouldn't be in the audience," she says. "Just by watching Fashion Police, if you don't know it's going to be very close to the edge, then I don't know where you've been or why you're in my audience. As I would say, 'Go see Donny & Marie'."

Rivers made her mark in standup, but even at age 80 she has her hands in a variety of endeavors. She mentioned Fashion Police on the E! Network where she, Giuliana Rancic, Kelly Osbourne and George Kotsiopoulos critique Hollywood fashion, which brings Rivers to the West coast every week from her New York home. Rivers also has her own company which produces fashion, jewelry, apparel and accessories brands on QVC shopping network, and she and her daughter, Melissa, have inked another stint of "Joan and Melissa" on WE tv. Palm Springs Life caught up to Rivers at her New York home. She will appear March 1 at the Spotlight 29 Casino in Coachella.

I recently watched the 50th anniversary of the Beatles on The Ed Sullivan Show. When was your first appearance?

"In 1967. I was on by mistake because they told them it was Johnny Rivers, the guitarist. He announced next week on the stage, 'Little Johnny Rivers' and that was it. I got on Ed Sullivan Show without any audition, without anything. Because Ed read the cue card wrong."

What did that appearance do for your career?

"A tremendous help. When you did The Tonight Show with Johnny Carson, that gave you New York, Chicago, LA, San Francisco. When you did The Ed Sullivan Show, it gave you America. If Ed liked you and put his arm around you, you were OK. They totally believed him and trusted him. He loved me from the beginning, which is why he's my daughter's Godfather. His wife Sylvia was just like me, and I liked them very much. It really helped the career, but they were just lovely, nice people."

With your brand of humor, how do you kind of walk that fine line between what is funny and what might be considered offensive. Is that something you just gravitated to?

"I've never thought about it. From the beginning, the minute I walked on the stage I hate the term the truth as I saw it, but that's what I did. It's not a choice, it just is. Obviously, we're going to be talking about Woody Allen. It's all whatever the latest stuff is, what you talk about."

What do you think of the Tonight Show coming back to New York? Do you like Jimmy Fallon as the new host?

"I think it's wonderful. I think it just never has left New York. I think the New York spirit is great. I like Jimmy as successor for anybody. The first night, I was on one of his very first shows (on The Late Show). From the beginning I thought 'this kid has got it', no question."

Are you pretty content with where your life is right now? Do you want to change anything?

"I'm so lucky, I've always known I'm lucky. I've always loved my life. People say, 'Gee, what was the best time of your life?' I always say, 'Right now'. Even in the worst moments, I still knew it's OK. It will pass and it will be a good moment again. Nothing is permanent, so just push forward, and you can get yourself out of this. Also the other big piece of advice, and I'm sure you know, 'Busy is happy'. Get yourself busy, honey. Whatever you do, I don't care what you do, do something. I don't want to hear my friends, 'I'm not happy.' Get off and get dressed and go see the homeless. I don't give a damn what you do. Go do a puzzle."