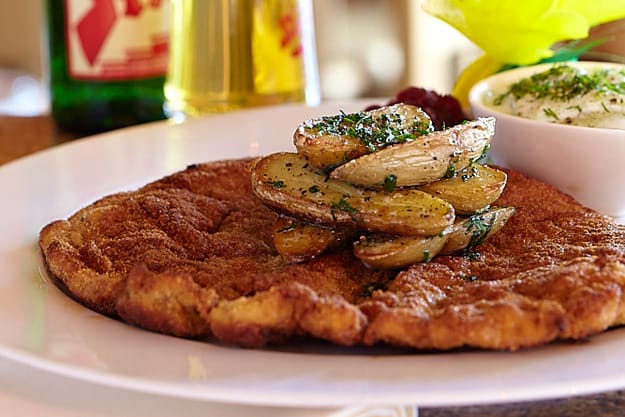 The drinks, Sexy Ginger Lemon Drop, Blackberry Mint Julep and Full Of Love Orange Vodka, all sound wonderful, but the recipes are a guarded secret.

"I discovered my passion for cooking through my mother, when I was seven years old — I was inspired to start baking cookies and cakes," Johannes said.

At the age of eleven, he started working in restaurants during my school holidays.  He said his father believed that he should take responsibility at a very young age, and he trained himself, discovering a passion for cooking.

"After that, I worked in the best restaurant in my hometown of Koessen in Tirol, Austria, and after finishing high school, enrolled in culinary school," he reminisces.  "After finishing my apprenticeship at the age of 18, I traveled the world –- I worked on a cruise ship and for Seabourn, then I worked onboard a private yacht, and then I came to Palm Springs."

"I have traveled the world all my life," Johannes said. "I am 14 hours away from home, where the next, best, Wiener Schnitzel is served homemade by my mother.

"The Wiener Schnitzel reminds me of my heritage and my home, where we ate a lot of Schnitzel!  It’s the crowd favorite; it is comfort food and it's classic."

Johannes has put a spin on the Wiener Schnitzel by serving the Schnitzel with a variety of sauces, toppings and fillings.

Schnitzel means cutlet without bones. Traditional Schnitzel is made with veal.

Pound a piece of veal or chicken, if preferred, until it is thin; about 3.5 ounces
coat with breadcrumbs and pan fry.
Serve with a Lemon slice, parsley potatoes, cranberries and cucumbers sliced with a dill sour dressing.


Celebrate Johannes' anniversary through the month of September.

Johannes Bacher is the Chef/Owner of Johannes Restaurant in Palm Springs.  Known as the “Eclectic Chef,” Johannes was born and raised in the small mountain village of Koessen in Tirol, Austria. Inspired by his mother, he began making cookies and cakes for friends and neighbors at the age of seven before receiving his formal training.  Johannes has received hundreds of awards from national and international media including Bon Appetit, Restaurant Writers Association, Zagat, Wine Spectator,  Alaskan Airlines, Elle magazine, Out and About, Travel and Leisure, Open Table, and The New York Times.