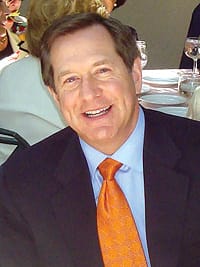 When Jordan Schnitzer entered the first grade, his mother went to the Portland Museum Art School. “This began a magical time for me,” he says. “She brought home chalks and paints and pastels. I would visit (class). Some the artists babysat me.”

After two years, some of her teachers complained there was no commercial art gallery in Portland. “My mother and grandmother and a friend started Fountain Gallery of Art, so named because it was a block from Skidmore Fountain,” he recalls. “For the next 25 years, she ran the gallery and did a wonderful job helping people in this Northwest community understand the importance of having art in our lives and taking that first tentative step toward becoming collectors.”

While his father’s real estate business enjoyed success, his mother’s gallery helped build the careers of regional artists. “Under her tutelage, I learned how important it is to support art in our communities,” he says. “What would the Coachella Valley be like without the McCallum Theatre or the Palm Springs Art Museum or the Palm Springs International Film Festival? Art and culture are our collective soul; it defines us as a people.”

In the 1980s, while a board member of the Portland Art Museum, Schnitzer left a meeting and walked into a gallery, where he saw a show of contemporary prints. There was Jim Dine and David Hockney, Ed Ruscha and Frank Stella. “I was feeling lost about my relationship to art,” he concedes. “I knew I wanted to be committed to buying art of our region. Mom’s gallery was like a sibling to me; when it was gone, I felt an emptiness.”

No one ever said life was simple.

Through Bob Koch at Auger Gallery, which specialized in prints and multiples, Schnitzer bought a purple triangle by Stella, then a piece from “The Blue Guitar” series by Hockney, then another graphic by Dine. “The art market had sort of crashed,” Schnitzer says. “Prints and multiples were reasonably priced. I went back every few weeks and bought more.”

His pursuit fueled his passion, and vice versa. In the 1990s, buried in catalogs from Sotheby’s, Christies, and Bonhams, Schnitzer saw Josef Albers, Christo, and others he liked. “I met with Bob [Koch] to talk about value and condition reports.”

David Robertson, now director of the Block Museum of Art at Northwestern University, reached out to borrow 56 of Schnitzer’s prints for an exhibition. “Several months later, I walked into a museum where I had been 100 times,” Schnitzer beams. “Suddenly, seeing these works installed by a curator, I was so excited, so stimulated. I felt like I was walking into a room full of friends. You have a special relationship with these works. It was such a high.

“And then the people came in [for the opening] and commented on the pieces,” he continues. “There was one transformational experience for me: when a dad walked in with his son and they were looking at a Robert Longo piece from his Men in the City series. I said to the boy, ‘Do you think that guy is dancing and rocking out, or is he in pain, about to pass out?’ The boy said [the figure] was dancing. I said, ‘I think you’re right.’

“No one can tell any of us what we think we see in artwork. We each react differently based on the sum of our life experiences. We bring that to each artwork we see.”

Schnitzer and his family foundation have mounted 80 exhibitions in 50 museums, mostly in the West. His organization loans works for free and provides funding for education. “I make a substantial collection available to museums and universities and get to share my passion for the art with hopefully thousands of people of all ages who might not get to see Chuck Close, Kiki Smith, Roy Lichtenstein, or John Baldessari.”

Schnitzer, namesake of the art museum at University of Oregon in Eugene, eschews any elitist perception of art’s role in society and believes it can make anyone a better, more thoughtful person. And he’s downright philosophical about it.

“Every day brings new challenges,” he says. “No matter how complicated our family lives are and how stressful our business life might be, if you have a passion for arts, it’s like a refuge. I can go to a gallery or a museum in any city and find some work that makes me appreciate how lucky I am to be alive and healthy.”