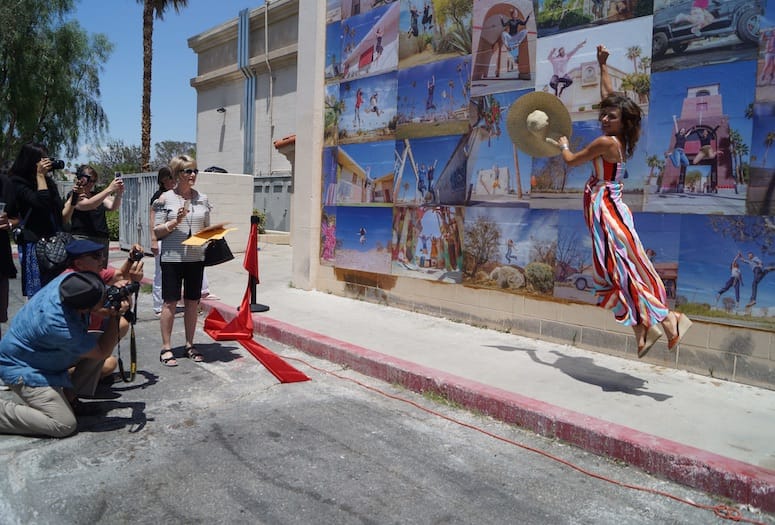 Eyoälha Baker flies for photographers during the unveiling of the "Jump For Joy Photo Mural" at the Palm Springs Cultural Center.
PHOTOGRAPHS BY SUSAN MYRLAND

The woman arches backward in a cheerleader’s C-shape, her denim shirt peeling away from her body. She appears to float high above the mountains. Another woman levitates an inch or two off a golf course, celebratory yet decorous, arms raised as if she’s just landed a tricky putt.

They are jumping for joy.

The images are two of 149 portraits of Coachella Valley residents and visitors that form the Jump For Joy Photo Mural, the latest artwork from Canadian artist Eyoälha Baker. Unveiled May 19, the mural wraps around three walls of the Palm Springs Cultural Center (formerly Camelot Theatres). 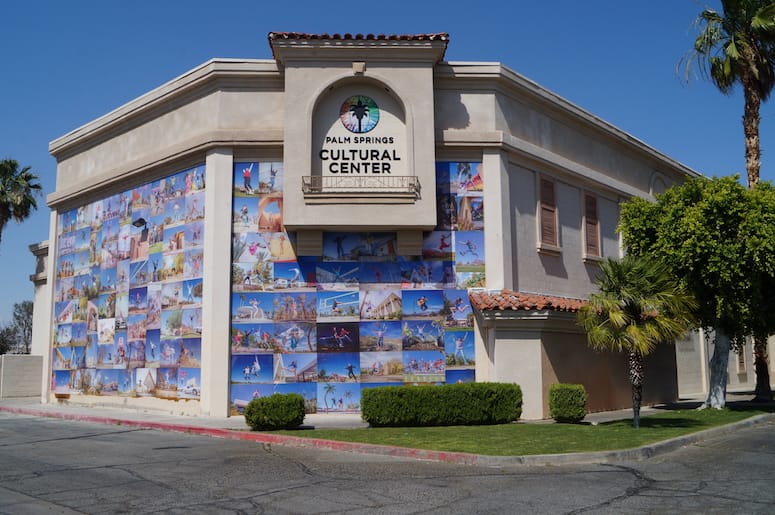 This is the first time artist Eyoälha Baker has done a project in the desert climate.

Baker hopes the mural will stay up for a year or longer, depending on weather. Her previous two were installed in Vancouver, British Columbia. This is her first time working in the desert climate. It’s also the first piece of public art for the Cultural Center, the first entry in their new artist-in-residence program, and the first mural completed under a revised city ordinance intended to streamline the process.

Baker — whose first name is derived from a Kwak'wala word meaning “the wind” — says she had a “movement-oriented upbringing.” Born in the small village of Alert Bay off north Vancouver Island to a family she describes as “artists, athletes, entrepreneurs, and builders,” she grew up living in a teepee in Morocco, riding elephants in Sri Lanka, and trekking through Thailand.

“We had a very different lifestyle,” she says of her parents. “I think it’s the greatest gift they ever gave me because that’s how I became so understanding and respectful of different cultures. It really showed me how human we all are, no matter what we believe, no matter where we live, no matter what color we are.

The Jump for Joy project emerged out of sadness. In the months after 9/11, the repeated visuals of violence and fear caused Baker to shut down emotionally. A decade later after ending a bad relationship, she again found herself despondent. She went back to what she knew best — traveling around the world, taking pictures. 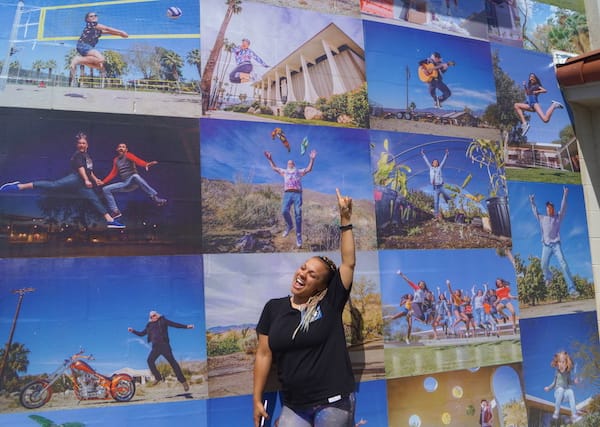 Tatiana Rose, an instructor at the Marquee Academy of Performing Arts, finds her photo in the mural.

Sidelined in Berlin with a sprained ankle, Baker wrote a list of the things that brought her joy. She decided to return home and make images that would trigger positive emotions on a grand scale. “How would it feel to have a mass wall full of joyful energy? How does that make me feel, and how does my feeling affect somebody else? That contagiousness of it, that visceral interaction with images … it definitely became apparent, the power that could be.”

Her drive led to two temporary murals in Vancouver, both funded through crowdsourcing. The Palm Springs Cultural Center residency offered financial stability, staff, housing, and the opportunity to bring her subtly political messages about race and dignity to the United States. It meant artistic validation.

“It took me probably 10 years to admit I was even a photographer,” she says. “This experience, and having so much support, and having so many people identify with what I’m doing — it gave me more permission to admit to myself that I’m doing something special here. That I actually do have an eye for stuff and I actually am creating work that people want to see.”

Baker’s approach references the master of jumping photography, Philippe Halsman. In the early 1950s the renowned portrait photographer began asking celebrities to jump, producing striking images of Richard Nixon, Audrey Hepburn, and the Duke and Duchess of Windsor in midair. Halsman said he used the technique as a way to show the real person behind the mask, but the results may have revealed more about the gift — or lack thereof — for physical comedy. 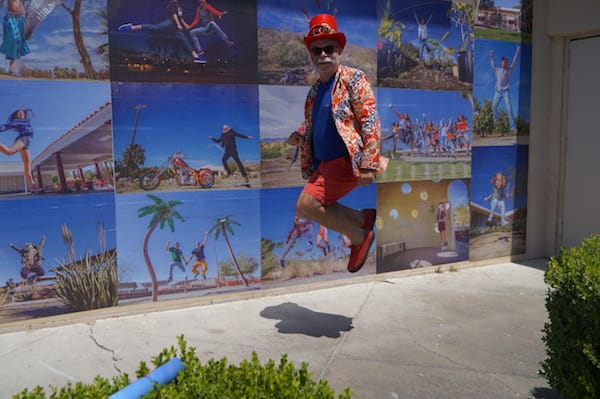 Palm Springs' David Gray reenacts his jump for the mural.

If Halsman brought the high and mighty down to earth, Baker elevates the diversity of the Coachella Valley, along with its flamboyance. She went east to photograph farmworkers, north to capture musicians and motorcyclists in Desert Hot Springs, and south to Salvation Mountain. She approached tourists on the street and homeless people in parks. Palm Springs’ 6-foot-6 diva (in heels), Bella da Ball, posed in bunny ears and spangled shorts. Baker featured several media notables including Steven Biller, Palm Springs Life’s editor-at-large.

Each person was encouraged to share his or her thoughts on joy and the experience of being photographed. Most said they felt awkward before the shoot but relaxed when it was over. Baker knows she has a short time to establish trust before someone launches themselves off the ground. She’s found a trick that works. “I act like a complete goofball,” she says.

By leading with playfulness and making herself vulnerable, Baker aims to transform her subjects into co-creators; contributors to a growing, global community of joy. “Especially working with the people who were homeless,” she says, “people want to matter. They want to be a part of something.

“I see who you are and I want to capture that and share that with the world. I think we all want to be seen and we’re all afraid to be seen.”

At the unveiling, there were plenty of people wanting to be seen. They posed for photos in front of their photos, happily reenacting their jumps. Long after the dignitaries, volunteers, and media were gone, a worn Ford Excursion pulled into the lot behind the Cultural Center. Six women and children tumbled out and rushed to the mural. One woman called out and pointed.

“Look, there you are!” she shouted. “Right in the center of it all!”

Palm Springs Cultural Center, 2300 E. Baristo Road. More portraits, and the stories behind them, are housed on the project's website, jumpforjoyphotoproject.com.