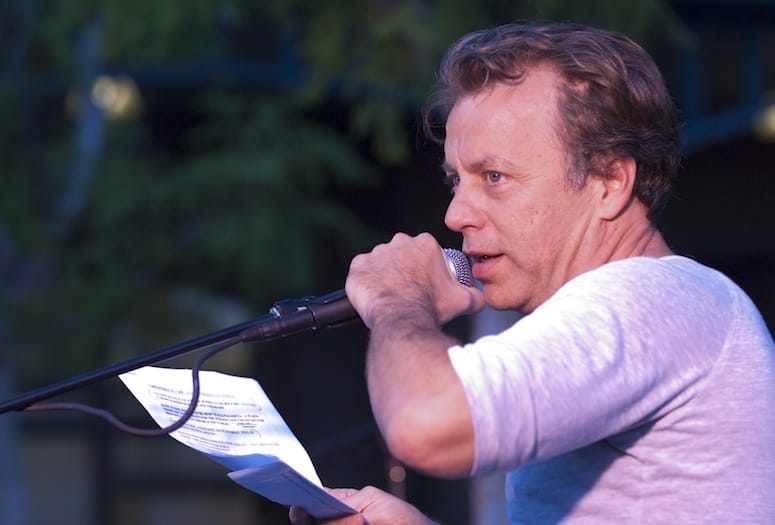 When Chris Douridas likes a certain song or chooses to debut a band on one of his projects, industry critics and those in the know often take notice.

He’s been hailed as a “tastemaker” in the incredibly competitive music and entertainment business — a compliment he humbly takes in stride.

“We are all tastemakers,” says Douridas, the popular DJ and host of his own show on National Public Radio outlet KCRW in Santa Monica. “We all turn to each other for opinions on things. I’m just another guy with an opinion.”

Despite his modesty, Douridas’ opinion does matter and his many career accolades and credits lend testimony to his expertise. He will be among a host of DJs to appear at the Ace Hotel and Swim Club this weekend, Aug. 14-16, for its art and music fest called Summer School. Summer School is an offshoot of Douridas’ own School Night, an event showcasing fine DJ mixes, up and coming musicians and independent artists that earned the title “America’s Best Party” by Paper Magazine.

School Night’s roots date a few years back when Douridas was invited to DJ at the Bardot, a Hollywood club where he took on the personal challenge to move from behind the DJ booth to spin for people on the dance floor. He says he ran into Chrissie Hynde of The Pretenders who was looking for a cool place for a gig and he asked her to join him as headliner for the evening.

“School Night is a more a party than a concert event…in our mind,” says Douridas, who along with his partner, Matt Goldman, launched the independent project. “It’s been incredibly successful. It’s beyond our wildest dreams. It’s become an essential stopping point for new artists launching new albums. We feature many new artists and debuts. We are so lucky and it’s been very organic. It’s really been a passion and gotten a life of its own.” photo courtesy of the phantoms

School Night has expanded to New York City and in a natural extension of Douridas’ love of the Ace Hotel and Swim Club (where he stays when he visits) and Palm Springs, Summer School was born.

Douridas says he is looking forward to getting a date shake and encourages fans to, “come on out to the pool. Palm Springs is a great and I really like the atmosphere there. It’s not just the temperate climate and 24/7 va-cay vibe. But the people there are very unique and the crowd that comes out to see us is very warm and welcoming. It’s such a beautiful place.”

Now in it’s fifth year, School Night and the Ace Hotel and Swim Club present Summer School with a full weekend of DJ sets, live performances, and artisan workshops in conjunction with the LA-based non-profit HVWS Art + Design Gallery. Bands Jacuzzi Boys and Phantoms will be on deck along with DJ sets by Kodak to Graph.

“We draw from bands that play at our flagship LA events,” he says, “bands that are typically excited to come out for a free weekend poolside in the desert. Our crowd is in bikini’s and swimsuits making it a fun weekend.”