Ken Jeong on doing stand-up comedy: “I haven’t done stand-up in nine years, and I just started doing it again, really just out of the love of it."
PHOTOGRAPHS COURTESY AGUA CALIENTE CASINO RESORT SPA

Ken Jeong is having his Sally Field moment.

It’s not that he is just now realizing that he has fans; he actively live-chats with admirers across social networks and looks forward to meet-and-greets with an uncommon, genuine giddiness. It’s evident in his persistent feelings of surprise and gratitude — and joy — birthed onstage in a mock male beauty pageant at his high school in Greensboro, North Carolina.

“It was my first time, like, just improvising and doing comedy. I didn’t even know I was funny,” he recalls fondly. “I got a standing O, just being silly.”

An acting career wasn’t on his radar. He graduated at 16, went off to Duke University for pre-med classes and then to the prestigious University of North Carolina School of Medicine. Stand-up was his outlet between exams and lengthy hospital shifts as a medical student.

Jeong got his break as the prickly delivery doctor in Judd Apatow’s 2007 blockbuster Knocked Up and, with familial support, landed a role as international drug lord and maniacal party animal Mr. Chow in The Hangover opposite Bradley Cooper, Ed Helms, and Zach Galifianakis, which propelled him to comedy stardom. Jeong has been bouncing between films and television series ever since — including Community (2009–2015) and his namesake sitcom Dr. Ken (2015–2017), which he created, wrote, co–executive produced, and starred in.

Without his family’s encouragement, Jeong probably would still be seeing patients. He maintains an active medical license on the off-chance things don’t work out, but there’s little likelihood Dr. Ken will facilitate your next physical.

“I haven’t done stand-up in nine years, and I just started doing it again, really just out of the love of it,” he shares.

We spoke with Jeong about his first stand-up joke, his first casino gig — coming up April 12 at Agua Caliente Casino Resort Spa in Rancho Mirage — and the best advice his father ever gave him.

“There’s a full-circle moment that I’m having right now that I can’t quantify in dollars or cents,” Jeong says of his return to standup. “I’m just doing it because I love to do it.”

In a recent Facebook Live video, you told viewers you’re “really, really into stand-up right now.” This comedy tour is a return to live performance that is almost a decade in the making.

I’m really being bitten by the bug, hard.

It’s a lot more fun this go-around because people know who I am, and I can tell more stories and be a little bit more authentic than I was the first time around [in college], where I was an unknown just trying to prove myself. I’m having fun connecting with the audience and utilizing what I’ve learned over the past nine years — basically doing 150 episodes of television and 30 movies. You can’t help but learn stuff along the way. 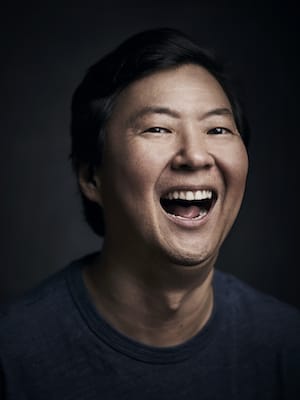 Your first gig was nearly three decades ago at a bar in Raleigh, North Carolina. Did you bomb, or was stand-up an instant fit?

I was very nervous. I brought in like 20 friends so I wouldn’t bomb outright. I was an opening act for this Grateful Dead cover band. I learned how to improvise from the get-go because I had all these jokes ready and, once I realized they weren’t flying, I literally just started going off-the-cuff and doing crowd work.

I was not really a Grateful Dead fan, but I knew that [In the Dark] was their only top-40 album, and everything else was very under the radar. I was like, “Oh my gosh, I love the Grateful Dead! ‘Touch of Grey’ was amazing!” I said that with such sarcasm and irony. It was like winning over the Deadheads was a big accomplishment. It’s so funny. That’s 27 years ago, and I still remember that. It really led to my own comedic acting in The Hangover. I’m known to improvise on set a lot, and that was kind of my first foray into that — comedy is half preparation and half listening to the audience, so to speak.

At the time, though, comedy was just a hobby.

I was pre-med, so, you know, I was this overachieving Asian student that took calculus when he was 15. At the same time, I was also very much into theater and acting and performing.

I often joke, I was “Korean-ed” into being pre-med, but it was a lot deeper than that. I ended up making that decision for myself, to finish what I started at Duke. I wasn’t wealthy. I wasn’t on scholarship. I didn’t know if a guy with my look could make it in the business. Even back then, at 18, I actually thought about that. I was like, I don’t know if a guy who looks like me could really succeed in this. It’s just not a linear business. 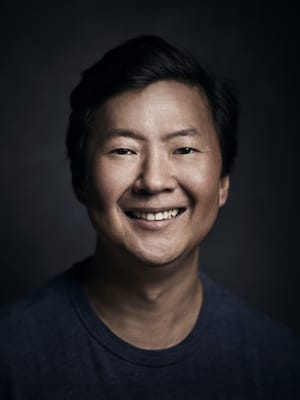 And still now — there are no criteria of how to get successful in the business, because everybody’s journey is different, and everybody’s talent is different. Long story short, I became a full-fledged doctor and worked at an HMO for seven years here in L.A., met my wife, who is also a doctor.

You’ve said your wife, Tran, has been your staunchest supporter. How so?

I had to make a difficult choice … Knocked Up was the first movie I did, where I played Katherine Heigl’s doctor. I just took a vacation week [from practicing medicine]. My wife encouraged me, after filming, to do acting full-time.

At that time as a doctor, I’m making six-figures a year. I’m a partner. I’m tenured for life. I have a pension and benefits, and it was really risky to do what I did. It was the belief of my wife that really was instrumental. She says, “I know I married a comedian at heart,” then low and behold, two years later, The Hangover comes out.

That actually trickles down to my wife and kids because when they see their dad happy, they’re happy.

How old are your girls?

I really don’t know. I haven’t seen them in months (laughs). Kidding! They’re 10. They’re twin girls, Alexa and Zooey … It’s not like my kids want to be comedians, or an over-the-top actor, or a doctor. Case in point, they just want to do what they love to do. One of my daughters is really into her gymnastics. My other daughter does swimming; she dabbles a little bit in children’s theater.

You’ve set quite the example: On top of this stand-up tour, you’re juggling projects in the development stages — movies you are writing, producing, and/or starring in — and you’ve got five films slated for release in the next year, including the Goosebumps sequel with Madison Iseman, Jack Black, and Chris Parnell, currently in production in Atlanta.

I’m actually shooting in April during the time I’ll be at Agua Caliente. I’m just gonna fly from Atlanta to come in to Palm Springs and Rancho Mirage to do the show and going back and filming the movie. I was just talking to my wife last night about it: I do have some TV and film commitments right now that are ongoing, and I’m trying to make room for everything.

Look, stand-up, film, and TV — it’s a hostile game. It’s just how badly you want it, and you’ve got to create your own content, especially now.

When I quit my day job to do this, I just wanted to be a character actor where I’d be “the guy from that thing,” and that’s all I ever wanted. I was not looking to be rich or famous. I just wanted to do what I wanted to do, because I loved performing. For me to do it at this level is just beyond my — and it sounds so cliché — but real life has exceeded my dreams by a long shot. I just want to work, and I’m happy when I’m just doing stuff I love.

What’s the best piece of advice your father ever gave you?

When I quit my job, I was worried about what my dad would think. At that time in college, he definitely wanted me to stay in medicine. It was my wife who encouraged me to quit my job. I told my dad, and he said, “You always want to have the support of your family when you’re making career-changing decisions, life-changing decisions like this. Your wife is now your family. If you have your wife’s support, you have my unconditional support.”

That’s the sweetest, most selfless act a father could do for his son as he enters the world of married adulthood. For him to trust me and let me chart my own path. That was amazing. I think about that often, with my own kids.

You’re marking a career milestone April 12 in Rancho Mirage. Are you looking forward to your debut on the casino stage?

I’m just so thrilled. I really am. To get a casino booking is beyond what I expected. I look at Agua Caliente as a great learning experience. I get to meet fans — meeting the fans after the shows is the best part. I know they’re coming out to meet me, to meet the guy that they know from The Hangover. I love it. I just want to go up onstage and do stand-up again, but, really, connecting with the fans is more enjoyable. What I’ve learned is people are rooting for me.

And is that the Grateful Dead joke?

That’s the only joke I use (laughs), and it makes no sense, just to spite the audience.

No, but my point of view now, as a guy who’s fortunate enough to be in a few hit movies and as a father, is completely different. It’s way more fun to just mess around with the audience — on so many levels. Everybody has a good time. It’s a great feeling, and it makes me happy too.