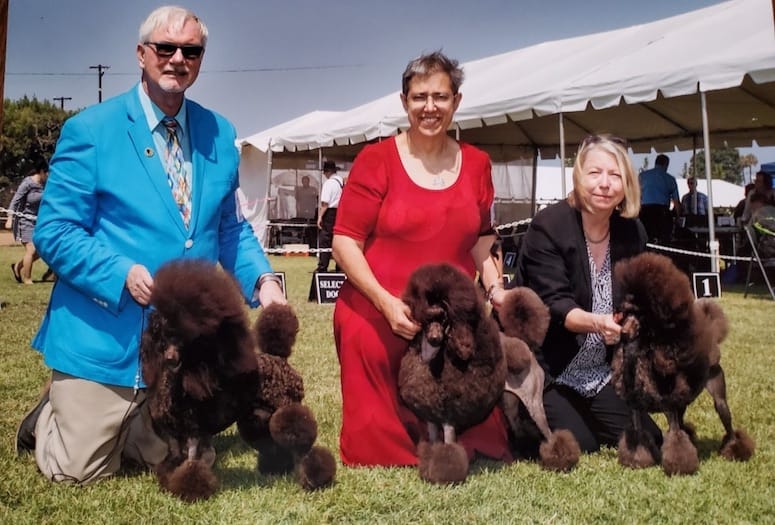 As a hairdresser, Cathedral City resident Hal Stradley enjoys putting his skill set into play by grooming his own dogs.

“The grooming for me, especially [with] the show dogs. It’s almost like doing artwork,” Stradley says. “It has to be done individually for that animal. And to show off its best assets and hide its lesser assets.”

Stradley has been showing off his dogs best assets for 47 years. Currently the owner and breeder of three female champion, pure-bred brown miniature poodles, Stradley is prepping one of them, Champion Avrlyn Endeavor, also known as Eddie, for the upcoming AKC All-Breed Dog Shows and Obedience and Rally Trials, Jan. 2-5, put on by the Kennel Club of Palm Springs.

“The joys is having the dogs and looking in their eyes and having them cuddle up next to you. And also the pride of having them win and know you did everything you can to get them there. And then they’re excellent. It’s just a lot of fun,” says Stradley.

Stradley always had dogs growing up, but his passion for poodles happened when he was 16. At that time, he lived next door to a woman who owned a café au lait miniature poodle named Coco, who he groomed. He then attended a Kennel Club meeting which led him to buying a silver toy poodle he named Gidget. From then on, Stradley began grooming and showing poodles in the early 1970s.

“I don’t breed dogs for money. I breed dogs to produce something better, healthier, a great companion animal, and beautiful,” says Stradley.

Stradley only enters one poodle in a show because of the time put into maintenance and preparation. 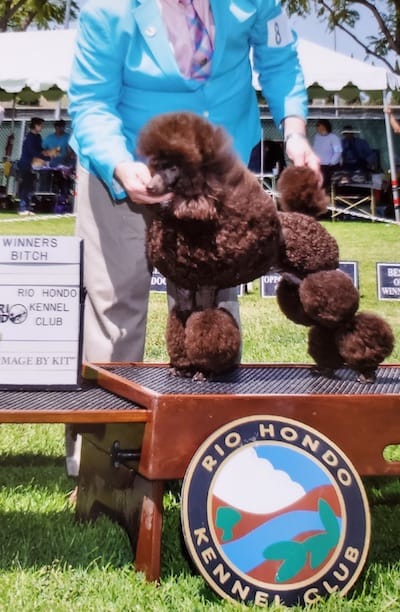 He starts his entrant on the grooming table at four weeks old. Although his poodles get their nails done weekly and are bathed and blow-dried, he shaves the face, feet, and tail. And once the coat grows back, the hair is banded up in ponytails to keep from matting.

Bands are then taken out and the coat is brushed thoroughly. Then the poodle is bathed once again, blow-dried, scissored and banded three nights before a show as well as the night before. Before showtime, the bands are taken out, its coat is brushed, hair-sprayed, and styled before taken out to the ring.

Before each show, Stradley trains his poodles by putting a dog lead on them, teaches them how to walk on his left side when in the ring. He also has them practice standing on the grooming table as if they were doing so at a show. Stradley says he practices confirmation, rather than obedience training by giving his poodles treats to confirm their good behavior.

“You talk to them when they are on the lead. When you work with them at home, you tell them how good they are, really work them verbally, and give them treats to make this a happy thing for them,” says Stradley.

AKC has listed kennel Club of Palm Springs Shows among the five largest shows in the country for several years. Last year, more than 3,000 dogs competed.

“People from all over the country come here, even dogs from Mexico and Canada, and we have international judges who are on the judging panel, as well as Canadians [and] judges from all different states,” said Show Chair, Gloria Toussaint.

In the rings, dogs are not compared against each other, rather they are compared against the standards of their breed that enters them into one of the seven competing groups: hound, sporting, working, terrier, toy, non-sporting, and herding.

“We hold these shows in hopes to educate the public about the attributes and values of pure-bred dogs,” says Toussaint. 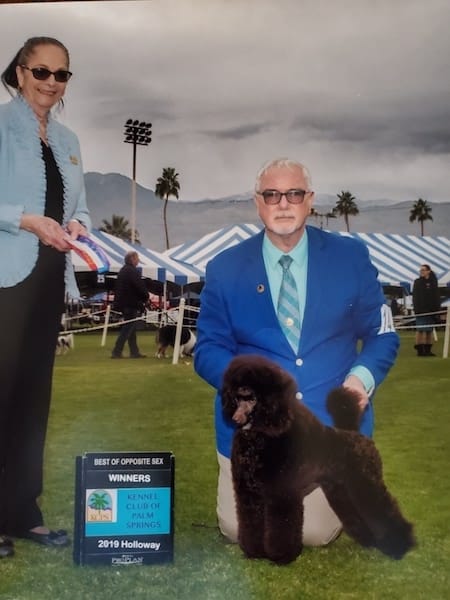 “And let people come out and meet breeders, meet exhibitors, meet the dogs and learn about shows and what goes on and why it goes on. [That] it's not just a beauty contest and that there is quite a bit of intelligence behind this and purpose behind this.”

The AKC New Year Cluster, Specialty shows will take place at the Empire Polo Grounds in Indio, on Jan. 2-3. All Breed shows will happen on Jan. 4 and 5, and Obedience and Rally will take place on Jan. 3-5. For more information, visit kennelclubpalmsprings.org.

“I’m very competitive. To have a bunch of animals that you have to constantly keep up and maintain coat, or condition and do roadwork on — you’re always analyzing. You’re always looking at their structure and temperament. And these are huge things that go into creating a show dog. And also a pet for somebody to love,” says Stradley.

• READ NEXT: What Else is Going on in Palm Springs This Month?