With swooping brushstrokes, curious marks, and loosely drawn rock formations and mountain ridgelines, the latest paintings by Kim Manfredi twist and turn with the same energy as her own adventurous spirit. But the wildly abstract canvases pack more meaning than their colorful surfaces initially suggest. They follow her never-ending quest to answer one of life’s most profound questions: Who am I?

Through self-inquiry, the artist and yogi, who spends up to five hours most days bicycling through the desert on scenic roads, continually seeks greater personal awareness, understanding, and freedom. Meanwhile, subtle traces of the landscape appear in her paintings, sometimes with open spaces, or portals, that seem to invite viewers into her inquest.

• VIDEO: Kim Manfredi Show Her Painting Process at Her Perez Road Studio in a 2021 Interview.

“During the pandemic,” Manfredi says, “I started this process that I refer to as ‘making, not knowing,’ which refers not only to my personal circumstance — in the sense that I don’t know what tomorrow will bring, and yet I choose to spend my time painting — but also to the process of putting color or a piece of fabric or cardboard onto the surface, not necessarily with a clear vision of the path I’m going to take. I just begin to respond to the materials and the surface. Then, what I’ve noticed happens is, there’s this recognition, like I think I know what I’m doing, or I recognize this place.” 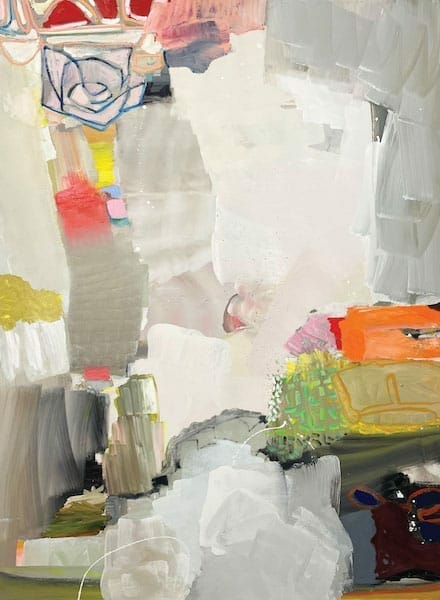 The Expanded Field of Painting.

Manfredi has no destination in mind for the pair of 6-foot-tall paintings in progress at her Perez Road studio in Cathedral City, although visitors might see them March 12–13 and 19–20 during Desert Open Studios, the free, self-guided tour of more than 65 artist spaces that she co-founded last year with fellow artists Lynda Keeler and Anne Bedrick.

For now, Manfredi says, she’s content to concentrate on making the paintings rather than exhibiting them.

That’s with the exception of two group shows for which she was selected: Zyzzyx Redux, curated by Bernard Leibov, at the Intersect Palm Springs art fair in February, and Cultural Cannibalism, which runs from April 8 to May 29 at the Coachella Valley Art Center in Indio.

The idea for Cultural Cannibalism, curated by Susan Myrland, draws from the 1928 Anthropophagic Manifesto published by the Brazilian poet and polemicist Oswald de Andrade, who asserted that Brazil’s history of “cannibalizing” other cultures was a strength and strategy to stave off European postcolonial cultural domination. “He was basically saying that Brazil is what it is because it’s been able to assimilate so many cultures,” Manfredi says. “But cultural cannibalism also has a negative connotation in the sense that a dominant or a majority culture might consume a minority culture and then use that for profit or gain.”

Responding to the idea of being a “cannibal,” Manfredi is exhibiting a series of collages referring to American artists, such as Robert Rauschenberg. In front of each, she places a pedestal with an Italianate object from her family. “It’s amazing how the red that I selected to go into the collage matches the little Jesus statue that sat on my grandma’s dresser forever,” she says. “I’m putting a little piece of silk organza over each of those objects, because when I was growing up, we whitewashed our Italian heritage in order to fit in and survive.” 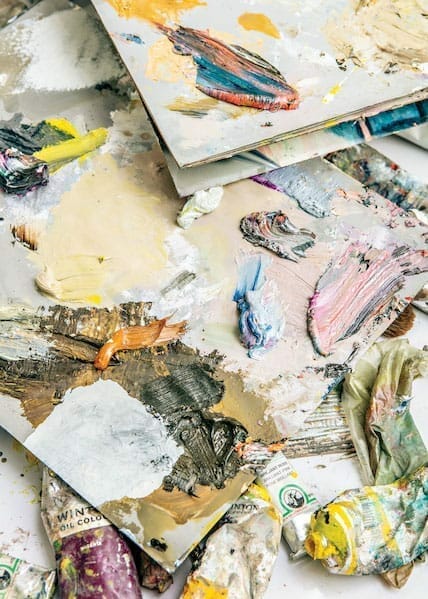 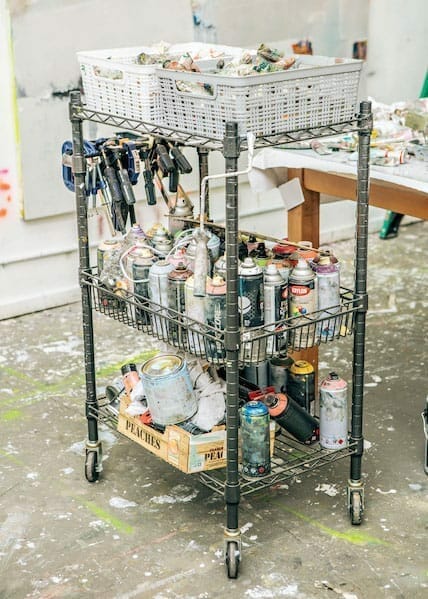 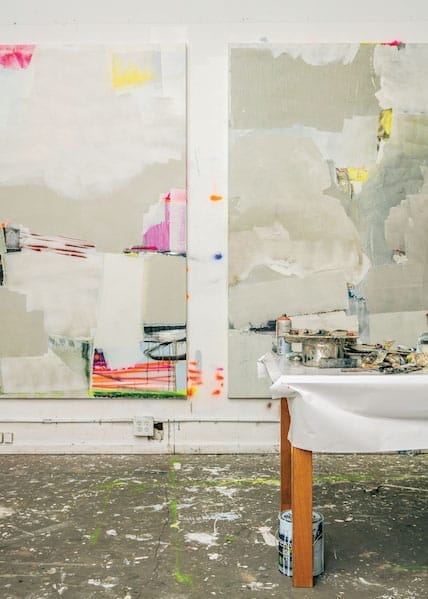 A pair of paintings await Kim Manfredi's next mark at her Perez Road studio in Cathedral City.

Before Manfredi moved to the Coachella Valley in 2016, she owned two successful businesses in Baltimore, Maryland. First was a decorative painting company that she started in 1990; she sold it to an employee in 2015 so she and her husband, Chris Blades, could grow the yoga school they’d started on the second floor of the carriage house where the painting company was located. The classes attracted graduate students, who in turn motivated her to pursue a Master of Fine Art degree, which she earned in 2007 at the Maryland Institute College of Art’s Hoffberger School of Painting. It was there where she met the school’s revered director, the abstract expressionist painter Grace Hartigan, who was known for her merciless student critiques and stressing expressivity.

“She was such a powerful woman that she left the New York scene, came to Baltimore, and painted,” Manfredi says, noting that Hartigan moved for her fourth husband, an epidemiologist at Johns Hopkins University.

“She started to direct this small [graduate] school of painting that never had more than eight students. I had applied but didn’t get in because I was older, and it was very competitive. I got to know [Hartigan] and got in the second time I applied. I became her assistant. At the end of that first year, she passed away [of liver failure]. Then, in our second year, Joyce Kozloff came in as the director. She was a pioneer of the Pattern and Decoration movement in the ’70s, and she’s still working in Manhattan. I was her assistant, and we’re still connected to this day.”

The teachers had different and long-lasting effects on Manfredi’s sense of self as well as her creative output.

“I had Grace Hartigan, who taught me to paint like a man — big brushes, use your body, fearlessness, and don’t let anybody call you a woman painter,” she says. “Then, I had Joyce, who was all about painting like a woman.”

Today, Manfredi’s paintings often include heroic “masculine” brushstrokes as well as color choices, including pinks and soft tones, that might read as “feminine.”

“That inquiry into who I am is a big part of my practice,” she says. 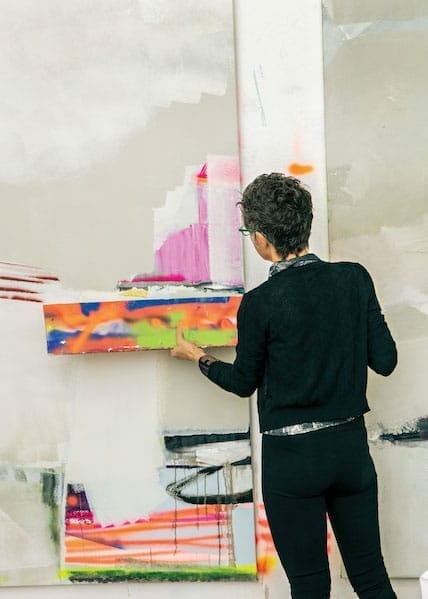 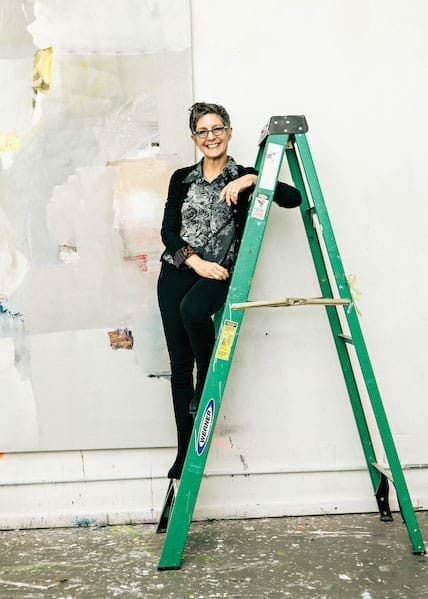 Kim Manfredi co-founded Desert Open Studios and is among more than 60 artists welcoming visitors March 12—13 and 19—20.

After graduate school, Manfredi was represented by C. Grimaldis Gallery, which gave her solo exhibitions in Baltimore and exhibited her work at art fairs around the country. She also became active in the local art community. At the same time, she was turning into “a bit of a yoga celebrity,” she explains, noting her business expanded to seven locations, “and that made privacy very difficult. I just wanted to paint in peace.”

In 2015, she and Blades sold the studios to Santa Monica–based YogaWorks. Soon thereafter, the couple left Baltimore for the Coachella Valley.

Manfredi lived in a desert once before: In 1988, after earning her bachelor’s degree from MICA, she moved briefly to Tucson, Arizona. “I wanted to live in that Agnes Martin kind of space,” she says. “You can’t hear that quiet voice unless you have some quiet, you know?”

Now, in the Coachella Valley, she says, “I am alone, in a good way.”

• READ NEXT: Wine Expert Trio Weigh In on Best Pours to Taste This Spring.