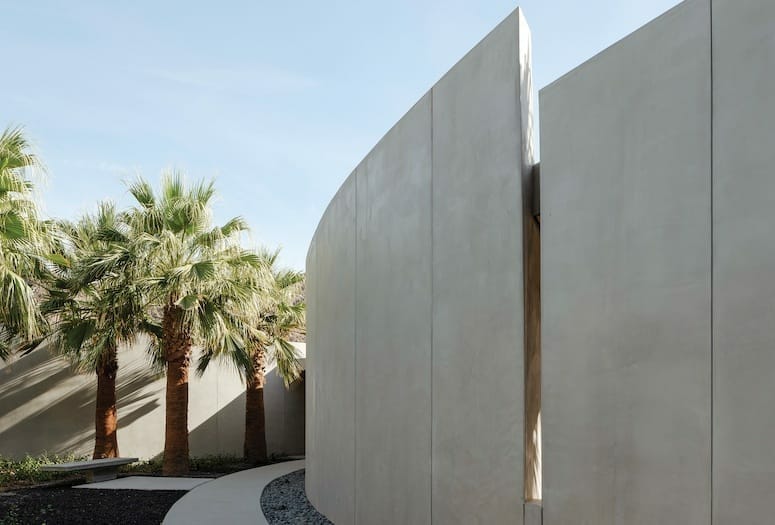 The quintessential drama of a circular, sunken living room — set within a round midcentury house — prompted John and Denise Ginascol to purchase a home at Eldorado Country Club in Indian Wells, where Denise had spent time as a child. Despite its 270-degrees mountain views, the home and its dark, cloistered rooms radiating off from the main living space proved problematic.

“The house had some not-so-good additions bolted on and a host of other issues,” John says. “Ultimately, we decided to execute a full teardown and rebuild.” The Ginascols credit Lance O’Donnell, AIA, of o2 Architecture, for his creativity “in taking the round concept and splitting it to create incredible views while holding the round theme.”

O’Donnell distilled its spirit and presented a curvilinear, “double crescent” structure as modern as its new efficiencies. “We were fascinated by the central circular volume, which informed our design,” he says. The most geometric house in the firm’s portfolio maintains the living area at the heart of the home. When seen from above, two arcs sit back-to-back with the living area between them, creating an organized yet organic flow that allows for views, natural light, and passive temperature control.

Starting over also gave O’Donnell the opportunity to flip the overall orientation. Now the pool basks in southern sunlight on the street side instead of sulking in the home’s winter shadow on the fairway side, where it openly faced the golfers. Complete privacy and a panoramic view of Mount Eisenhower define this new outdoor living area, that draws the owners outside throughout the day.

O’Donnell says the restrained home and its understated palette fall closer to “modern futuristic” than any sort of midcentury canon. “It has its own set of priorities” that stemmed from the original house, he shares. Heavy, concrete-looking forms shroud the interiors in cutting-edge mystique, their shape giving way to custom livability only a new build can provide. 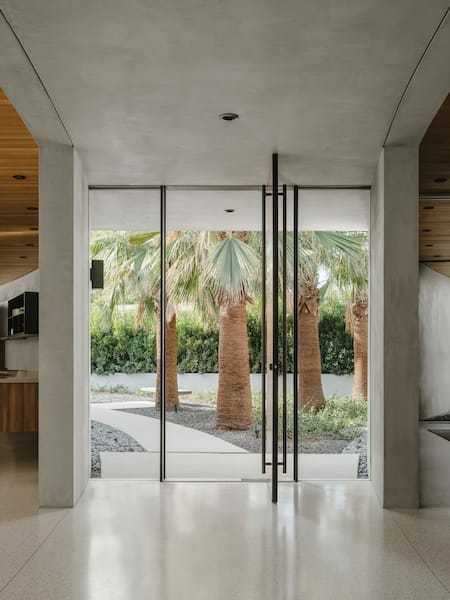 The desire to preserve an old olive tree produced the long promenade leading to the entry door. The journey along its curving path is paved with intention. Suspense builds as one follows “a procession of momentary vignettes” around the reticent wall. Once buzzed in, guests pass through a gate, catch a glimpse of the home’s interior through a slit in the wall, and discover a bench for contemplation in the courtyard before reaching a palm grove. The unconventional exterior is “almost like going into a canyon,” O’Donnell says. “It has a quiet presence that doesn’t reveal itself all at once. The palm grove is its oasis that you walk through before the end of the path. From the protection and microclimate of the oasis, you go into the home, and there’s all this delight inside.”

The moody barrier with a concrete-like appearance is a framed wall covered in smooth plaster. “The design, including the challenge of the long, curved walls, was flawlessly executed by Nate Rucker and Dave Muth” of RuckerMuth Luxury Homebuilders, shares John. The project marked the first teaming between O’Donnell and the builders. “Now they’re in our regular stable of contractors,” O’Donnell says. They get it, and they’re passionate about problem solving.” 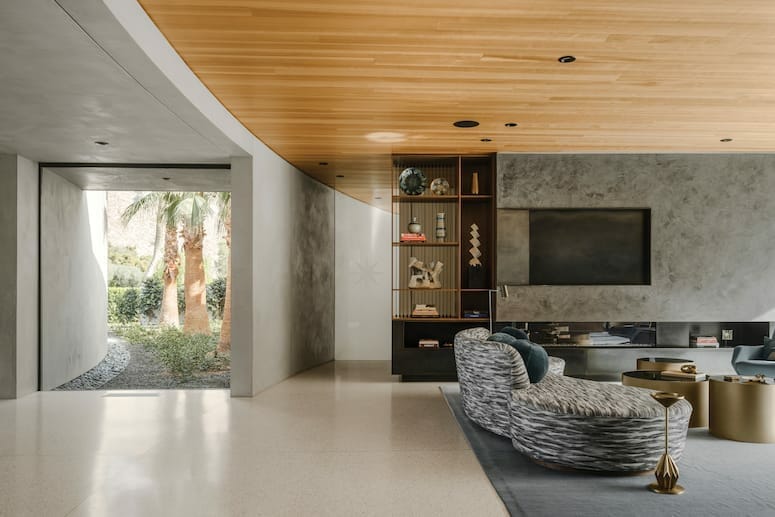 Open living, but not too open, might be the key to creating a sense of ease in one’s own home. Artist Steve Webster fabricated the dining-to-living and the living-to-primary-bedroom separators. These blackened steel and walnut elements, designed by o2 Architecture as furniture, visually divide the spaces and were executed by Webster with master craftsmanship at a refined level.

The architectural proportions also enhance the comfort level. O’Donnell favors long residences with reasonable ceiling heights. “I stretch them out as far as I can” to echo the mountains, he says. “This home has as an expanse to it.” Wrapping it all together is the palette: concrete-colored walls, wood ceilings for warmth, and a poured terrazzo floor for a classic Palm Springs modern feel.

Antonio Martins of Antonio Martins Interior Design in San Francisco, who has worked with Denise on three of the couple’s homes, “aligned the interior to our sense of style and how we live,” John says. The placement of the rug denotes the center of the original home’s living room. 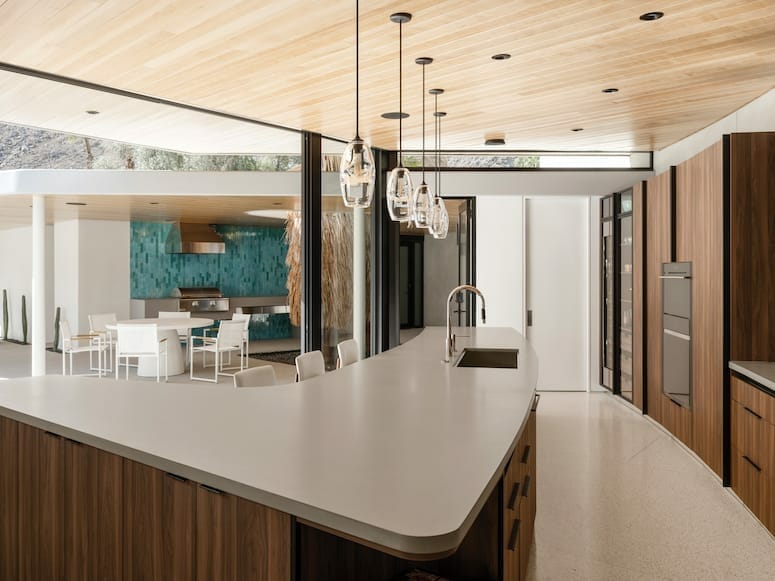 GIVE FORETHOUGHT TO THE IMPACT AN OPEN KITCHEN CAN MAKE.

When a kitchen occupies a central, high-visibility location, its design becomes all the more critical. John and Denise seized the moment to elevate the home’s overall aesthetic by creating an integrated custom kitchen zone with de Giulio Kitchen Designs, an industry leader for over 45 years. “We loved the way the swoop mimics the curves of the home,” says Denise, “and that de Giulio was willing to tackle the intricacies of making a curved kitchen. It wasn’t as easy as it looks to fit the drawers, doors, and appliances in this kind of space.” The firm packed the kitchen in boxes and arrived from Chicago to do the install, exhibiting a level of professionalism on par with its good looks. 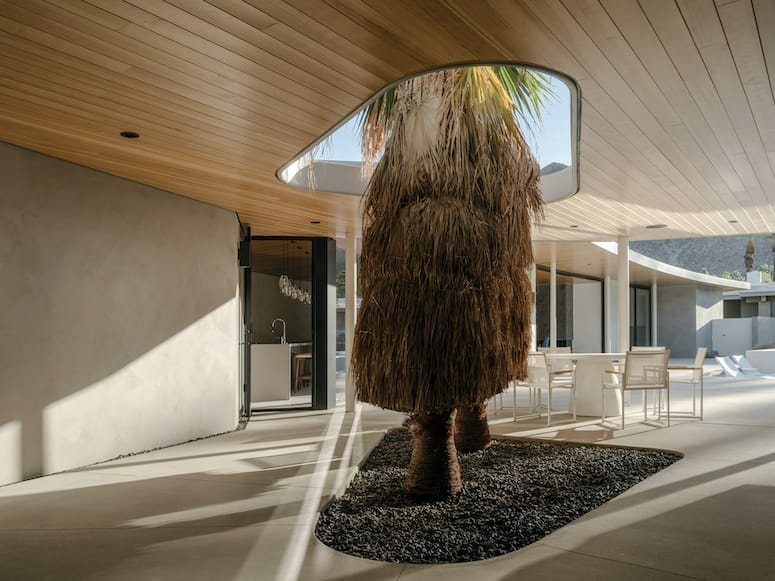 Play with light, shadow, and repetition.

Throughout the day, the sun inches over the lanai, splaying shadows that mark the time below. The cut-out in the overhang appears to have fallen into the floor, rotated itself, and filled with gravel. Where leggy trunks could have stood, two full-skirted palms pair up like bristly sentinels. Their unmanicured growth is a welcome contrast: an ancient texture amid the modern terrain. 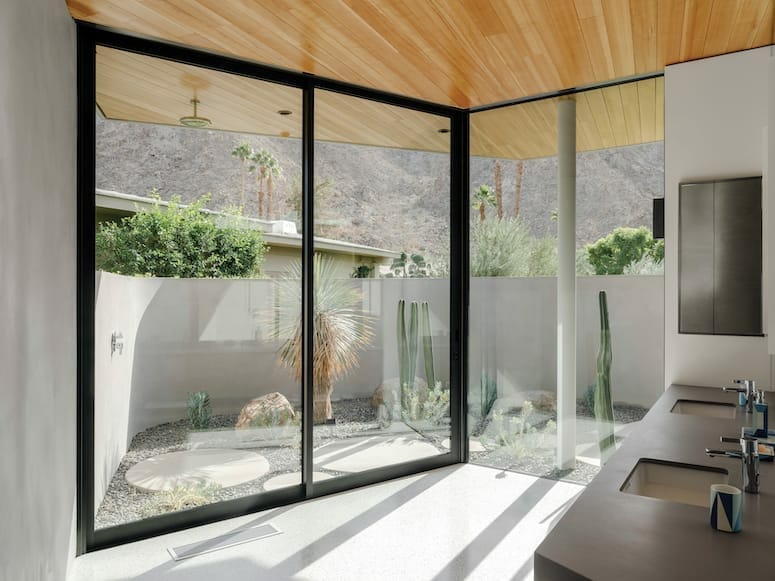 Take indoor-outdoor living beyond the pool.

Personal outdoor spaces, like this spa courtyard extending from the primary suite, offer more private ways to enjoy the climate. From inside, the view through the glass is layered, as the wall enfolds a cactus garden. Step outside and a rain shower invites a refreshing, open-air experience. “It’s east-facing, so the morning sun comes up and warms that space,” O’Donnell notes.

“Lance’s placement of windows, some of them in surprising places, means that in every room, aside from the powder room and the laundry room, there is a window to bring the outdoors in,” John says.

•READ NEXT: Planters Showcases Their Contents Against Desert Backdrops.