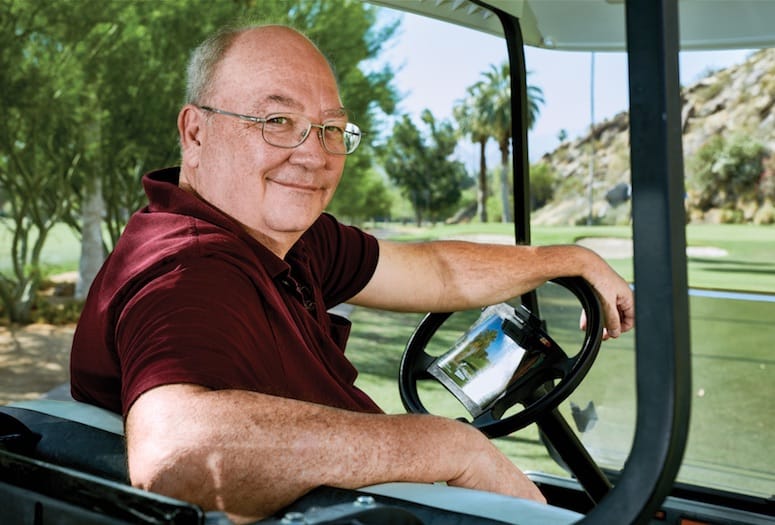 Larry Bohannan, the longtime golf writer for The Desert Sun, humorously revealed his health status in a 2019 column titled “How to Properly Freak Out Over Prostate Cancer Diagnosis.”
PHOTOGRAPHS BY NATE ABBOTT

It was the night of Jan. 24, and Larry Bohannan was in an uncomfortable place, which was somewhat bizarre,because this was the Indian Wells Country Club, and Bohannan was the longtime golf writer and columnist for The Desert Sun. It wasn’t like this was his first visit. Closer to his 201st.

But always before, he was the guy with a notebook in hand and a story in mind. This night, there were pictures of him in the dinner program, his name in big letters, and a spot at the front table, where honorees sit. He was the interviewee, not the interviewer.

“The first thing I learned, back in journalism classes at Cal State Fullerton,” he says, “is never be part of the story.”

This was the annual Desert Golf Invitational, an American Cancer Society event. Bohannan was the honoree not because he hit long drives or made long putts — or even eloquently wrote about either — but because he recently battled through cancer himself. Nor would that alone put him on the dais that night. What got him there was that he did something he had sworn he would not do: He wrote about it.

“My mindset, once I heard I had prostate cancer,” he says, “was to tell very few people. I was determined about that.”

He let a small group of people know, and soon, his life began to change dramatically. Friends asked if they could have people they knew, people who had gone through something similar, call him. He said yes, still not ready for the avalanche about to hit him.

“Pretty fast, I changed my mind about how many people I would let in,” he says. “It was overwhelming, in many ways. What can I do to help? Is there anything I can do? My friend went through this and he was fine. I even had one man volunteer to pick me up and take me for tests to UCLA Medical Center. Can you imagine, volunteering to drive into that L.A. traffic when you don’t have to?”

So, Bohannan did the opposite of keeping things close to the vest. He wrote a column about it. The headline was: How to Properly Freak Out Over Prostate Cancer Diagnosis. His lead paragraph was: “The first thing I thought when the urologist confirmed that I had prostate cancer was to wonder why he wasn’t reacting to the 5.3 earthquake that was clearly shaking everything in the room.” Later, he kept it light, which is his way and which he was determined to do, by adding: “I told a friend who was getting a little worked up over the diagnosis that prostate cancer is the boy band of cancers, because it is treatable and curable.” 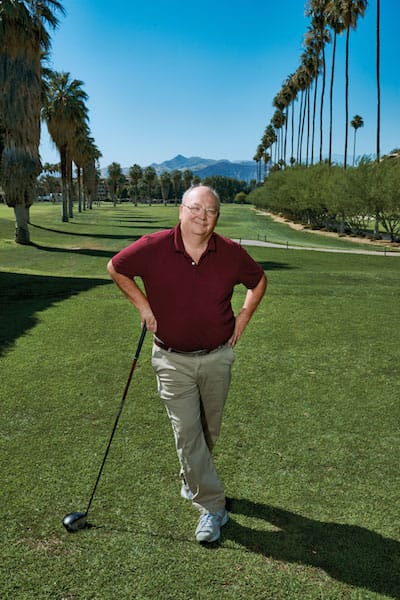 “Here I was, a 61-year-old cynical newspaperman,” he says, “and then this happens, and people open you up — so many people, so much kindness.”

“They did nine tests,” he says. “Five said I had cancer.”

Doctors sent him home with advice and options on the next step: surgery, radiation, etc. One doctor gave him a book and told him to skip the first 100 pages and the last 100. The middle 100 graphically described what he would face with the different procedures. He didn’t sleep for three nights.

“It’s amazing,” he says, “how many old Humphrey Bogart movies are still out there.”

Once he decided on surgery, he had another big decision: How would he get this done and still get back in time to cover the January pro golf tournament that has become a staple for thousands of winter golf fans?

“The first surgery date they gave me was the same day as a Phil Mickelson press conference,” Bohannon says, “so that was out.”

Showing at least a hint of common sense, he took the next offered date, Dec. 5, even though that meant he couldn’t attend the general media press conference at the event (now called the American Express). The tournament was mid-January. Bohannan was back, tapping at his laptop. It was the 34th consecutive year he had covered the tournament.

An outpouring of warmth and caring had carried him through the surgery and left him walking around slightly outside his own body. He was a grinder, a sports reporter who has covered high school football games for 39 years. He was never the story, never wanted to be, and never even stopped to imagine what that would be like. The experience had affected him well beyond his own understanding of how anything could affect him. His parents, Frank and Texie Bohannan of San Antonio, Texas, had come and stayed a month as he healed from surgery. He posted a note on social media, along with a picture of his parents. The note said: “If you get sick, take two of these. They are called parents.”

“The first thing I thought when the urologist confirmed I had cancer was wondering why he wasn’t reacting to the 5.3 earthquake shaking the room.”

It was with this overload of emotions that Bohannan took the microphone at the Indian Wells Country Club to be the evening’s centerpiece, not its chronicler.

“I don’t give speeches,” he said. “I give rambles.” The audience giggled.

He told the story about the lady who had read his column, saw him at an event, and wanted so badly to make him feel better. “She told me that everything would be fine,” Bohannan said, “because her aunt had had the same cancer and she was fine.”

He told of the outpouring of concern from people he never knew and how it had lifted him up. He told the audience, so many of whom were cancer survivors, that he was honored, above everything else, to be part of their club.

Exactly a week later, he went for the report on his surgery outcome. He was told that his PSA — the measurement used to detect prostate cancer — was “0.” Anything over “4” is in a danger zone.

Bohannan was not only cancer free, but he had picked up several thousand friends in the process.

• READ NEXT: Check out the Entire Issue of Be Well for Pertinent Health & Wellness Stories.