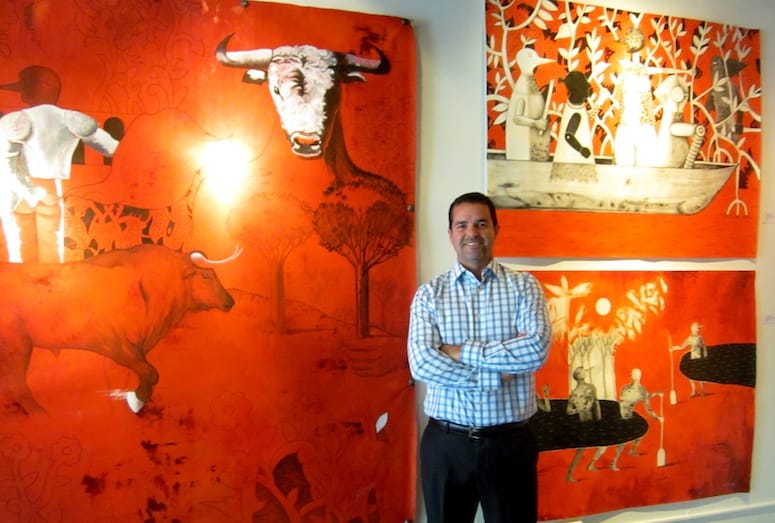 When Vladimir Cora entered the Jorge Mendez Gallery for the premier opening Dec. 6 in Palm Springs, he said it was like coming home.

Cora, an internationally known artist from Mexico who studied under Rufino Tamayo, began his career in Palm Springs in the 1980s.

“He worked as a gallery assistant for art collector Bernard Lewin,” says Jorge Mendez, director of the gallery that bears his name. “He told me it was like returning to his roots.”

Two figurative paintings of Cora’s now show in “Twelve,” the first group exhibit in the Jorge Mendez Gallery. In February, there will be a solo show of Cora’s paintings, drawings and sculptures to coincide with “Palm Springs Modernism Week.”

“He’s one of the main reasons why I opened this gallery,” confesses Mendez, who has one of Cora' paintings in his front window (pictured at right). “He is one of the best artists of all time.

Mendez worked in finance, but always had an appreciation for art. He met many exiled Cuban artists living in Miami, and commissioned Roney Fundora to do a painting. Fundora later introduced him to his brother, Lazer, and other Cuban artists who are now in “Twelve.”

Then Mendez’ partner, Raymond Maas, got a job in Seattle.

“The weather is so cold in Seattle, so two years ago, we bought at second home in Palm Springs,” he says. “Palm Springs has got a great vibe.

Mendez researched well-known Latin American artists online, and asked them to submit paintings for his Dec. 6 show. Some declined, because Mendez only had a website and no physical gallery space.

“I appreciate the ones who hung in with me,” Mendez says. “I think they could sense my honesty and passion for art.”

Mendez didn’t have to do many renovations to the 3,000-square-foot gallery space (the former Dwight Polen Antiques) that looks like a New York loft with beams, exposed ducts and floor-to-ceiling windows.

“Twelve,” features mostly large contemporary paintings by emerging and established artists from Cuba, Mexico, Brazil, Argentina and Peru. The installation will remain on display until Jan. 31.

Sometimes, politics is mixed in with the paint.

For example, bold red works by Antonio Guerrero (whose name means “war”) depict Cuban exiles escaping in the night for Miami, and what looks like a blood-stained canvas criticizing animal abuse of bullfighting. Without the smears, the painting might appear to promote bullfighting.

“I don’t think it’s real blood,” says Mendez. “It would have a different texture.”

Works by Rafael Lopez Ramos, another Cuban exile, depict Communist symbols from Russia and Cuba along with the Statue of Liberty.

“I think it’s OK to show political paintings because it gets people talking,” says Mendez. “But we don’t mean any disrespect.”

VIDEO: Gain a brief look at the gallery, and listen to Jorge Mendez explain the importance of his relationship with painter Vladimir Cora.