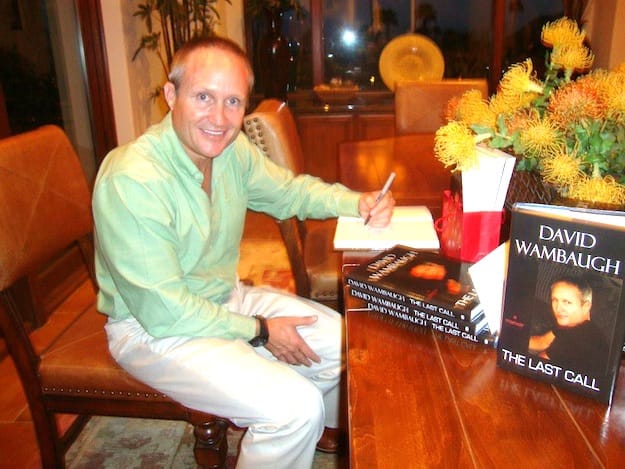 When your father is best-selling author Joseph Wambaugh, readers are bound to pay attention.

Wambaugh is the former Los Angeles police detective turned crime novelist, whose work has included The Onion Field and The Black Marble – both turned into feature films, while others, The Blue Knight and The Glitter Dome, were made into TV movies.

With such a lofty family name to carry, Wambaugh’s son, David, is making a name in his own right with the release of a personal memoir, The Last Call.

David will sign copies of his book from 7-8 p.m. July 3 at the Seventh-day Adventist Church, 27025 Girard St., in Hemet. The event is free and open to the public. Copes of the book will be for sale autographed by David.

In the book, David tells his own story starting with his adoption at six months old by the Wambaugh family. He eventually came to know about being the son of a famous author, and details alcohol taking control of his life in his teens.

His vices put him out on the streets of Los Angeles panhandling with a childhood friend, and escaping from being kidnapped after street-wise acquaintances on Skid Row discovered who his father was.

No rules, no accountability. That was the life David knew for the next 20 years, being just smart enough to stay ahead of law enforcement and knowing exactly what to say to push the buttons on his parents into helping him when he needed it.

On day, however, his luck ran out. David Wambaugh was sentenced to state prison. The tough lessons learned behind bars were in stark contrast to trying to live a clean life on the outside once he was released.

The book chronicles his every step to finding himself at the age of 40, taking the reader through tragedy, loss, righteousness, hope and miracles.

David Wambaugh,  48, currently lives in San Diego and has a son, Jake.  He is the director of Interventions for Teensavers,  which specializes in chronic pain/chemical dependency interventions working with families to rescue teens and place them in treatment programs.