The journey we travel on the road in order to find “the one” — the ideal home — can be filled with all sorts of unexpected twists and turns. That was certainly true for Joe and Kim Zakowski. So it seems particularly fitting that their story begins with a house the couple dubbed “Twisted.”

The Zakowskis, whose primary residence is an Italian villa in San Diego, began coming to the desert in 1999 and soon enough they were hooked. Three years after their first visit they purchased Twisted, a 2,450-square-foot midcentury home in Rancho Mirage they named after a misshapen palm tree in the front yard. 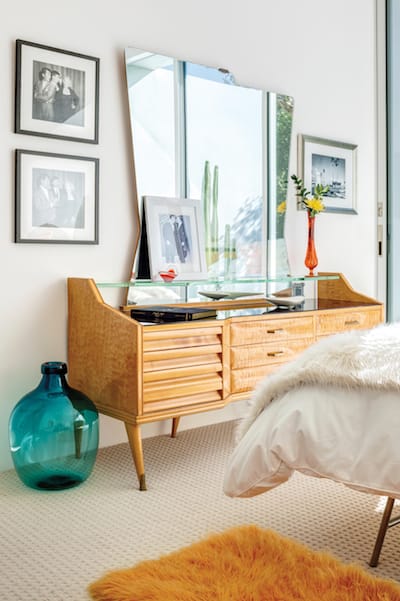 “We literally moved in with two bulldogs and an air mattress,” says Kim. “It took us three years to furnish it. We meticulously went through every room and furnished them all midcentury. Joe and I run a dental practice and we’re very left-brain, but we’re also very artsy-fartsy. Anything we do, we do 1,000 percent and we’re both type-A, anal-retentive perfectionists. So it’s a problem, but it’s the way we are.”

Initially, the Zakowskis adopted the desert as an escape from their busy lives and business in San Diego. “The only people we knew here were the furniture and art dealers,” says Kim. But after they attended Modernism Week in 2006, their social circle expanded dramatically and they found themselves enmeshed in the community. Joe was on the Palm Springs Art Museum’s Architecture and Design Council board for five years; the pair are founding members of the museum’s Architecture and Design Center; and Kim is on the Palm Springs Modern Committee board.

“All of our friends wanted us in Palm Springs, so we ended up buying our ‘Baby Cody’ in Racquet Club Garden Villas, designed by William Cody,” says Joe. “It was once Paul Trousdale’s private villa and it became our Palm Springs pied-à-terre.” He jokes they had a “country house” in Rancho Mirage and a city house. In contrast with the American midcentury furnishings at Twisted, the couple designed Baby Cody (named for its diminutive 1,075-square-foot floor plan) strictly with Italian midcentury pieces. 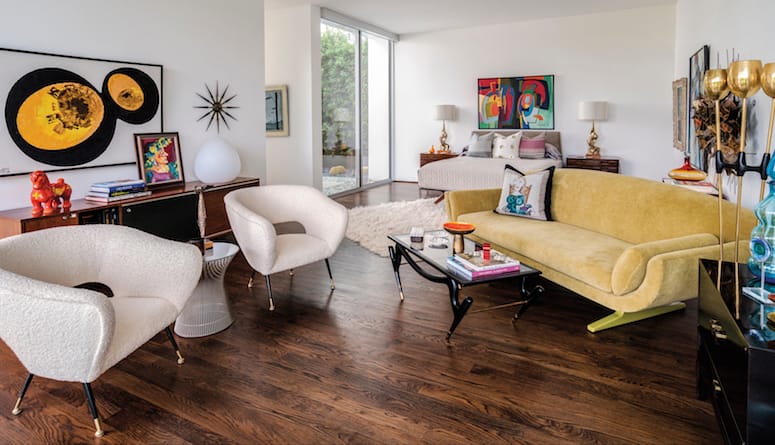 ABOVE: A George Nelson credenza from the 1960s combines with Italian furnishings from the same period in the master bedroom, where a chartreuse mohair gondola sofa faces a pair of white wool bouclé chairs. The coffee table in black lacquer and brass is also Italian, but from the ’50s. BELOW: Owners Kim and Joe Zakowski living in 1961.

But the Zakowskis didn’t stop there. “We’ve bought many homes throughout our 12-year marriage,” says Joe. “We’re kind of home-oholics,” Kim admits. In 2013, while on the hunt for potential houses to include in PS ModCom’s fall modernism tour, they found and purchased their current home.

Naming this one was easy. They called it “1961,” after its street address in The Mesa neighborhood of Palm Springs. 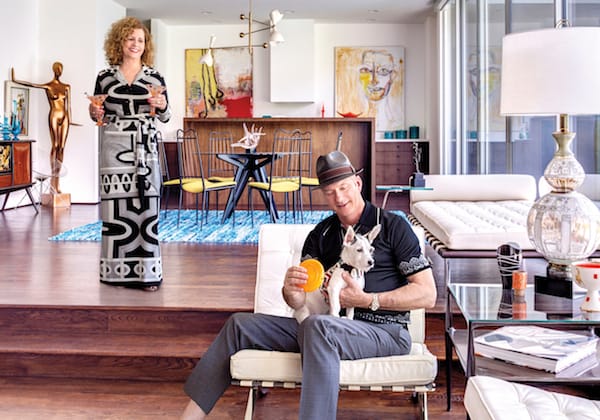 “Then came the biggest trick,” says Kim. “Bringing two sensibilities together: your quintessential midcentury furnishings and this great Italian midcentury collection.” After they sold both Twisted and Baby Cody, Kim and Joe immersed themselves in 1961 during the summer of 2013 to mesh the puzzle pieces from the two homes together.

What you’ll see in the 2,750-square-foot, three-bedroom, three-and-a-half-bath home is an elegant, seamless melding of diverse midcentury furnishings. An Italian dining table pairs with Brazilian chairs. There is a lucite-and-nickel rocking chair signed by Charles Hollis Jones. Platner side tables, pieces by Knoll, and an original 1959 Eames rocker share the space with European artwork and photographs by Julius Shulman.

While the property has the essence of a midcentury home, it was actually a new build. Architect Tim Sullivan along with designer Thomas Troy — the duo behind the real estate development outfit known as Home Lab — designed the home in 2013. 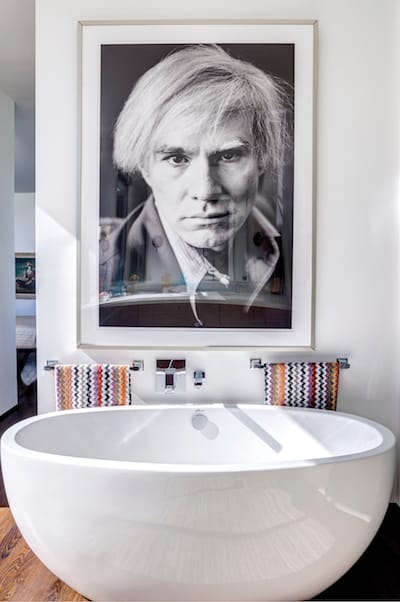 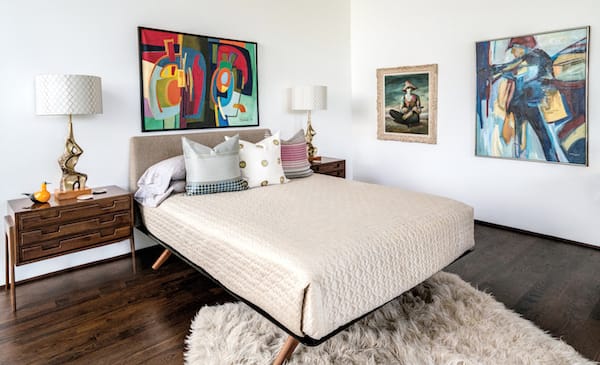 The Andy Warhol portrait in the master bathroom is No. 2 of 5 by Michael Childers. Italian 1960s walnut lacquered nightstands in the master bedroom hold lamps by Maurizio Tempestini for Laurel Lamps Company from 1970.

“The way we’ve furnished it, people think we’ve remodeled an older home,” says Kim. “It lives midcentury inside and outside. We love Bill Cody; he’s our favorite architect and we felt it had a lot of Cody-esque features, such as floor-to-ceiling walls of glass that blend the outside with the inside, walls that seamlessly transition from the interior to the exterior, and sophisticated architecture that can handle many different interior design concepts from antiques to modern, which is a Cody hallmark.

“Besides naming our houses, we also name the rooms,” adds Kim. Guests have a choice of staying in the Mod Room or the Marilyn. The latter features a stunning pencil portrait of Marilyn Monroe that hangs above the bed. There’s also a photograph captioned “Crosby, Hope, Sinatra golf photo” that once hung in Frank Sinatra’s own house, as well as three photographs of Marilyn with Dean Martin and Jerry Lewis that the couple purchased during their first Modernism Week. “We were told it’s very rare to have a photo of the three of them together,” says Kim.

The couple’s large master bedroom has a sitting area that is a re-creation of their living room from Baby Cody. Romantic European furnishings include a bed from Portugal flanked by sculptural Brutalist table lamps by Maurizio Tempestini for Laurel Lamp Company. A flokati rug takes an angle under the bed. “My dad bought the flokatis in Greece,” says Kim. “They were stored in an attic for almost 30 years. Then my dad gave each of his daughters one. So this rug dates back to the mid-’60s and it’s as great today as it was back then. That’s who Joe and I are. We just like stuff that’s old.” 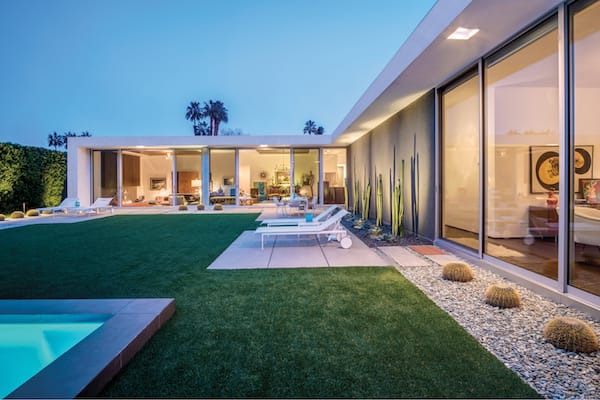 As do the home’s many visitors. Following the 2013 PS ModCom fall tour, 1961 was featured again on the 2015 Modernism Week Signature Home Tour.

While the home’s moniker is a clear reference to its address, Kim notes the interior is layered with midcentury panache that captures the spirit of the era, if not a specific year. “Our 1961 home is new but it has elements that make it feel like it’s old,” she says. Joe has his own interpretation: “We like to party like it’s 1961!” 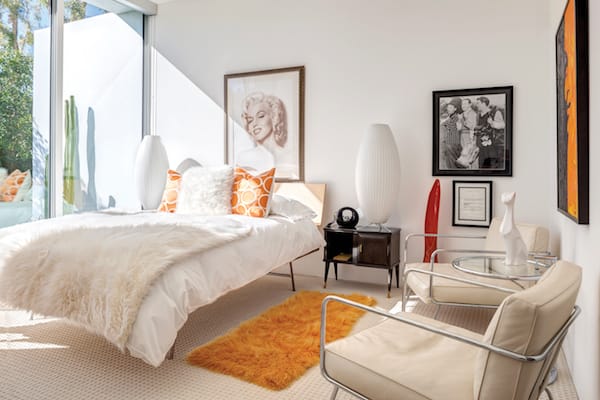 A pencil drawing of Marilyn Monroe brings a coy smile to a guest bedroom. 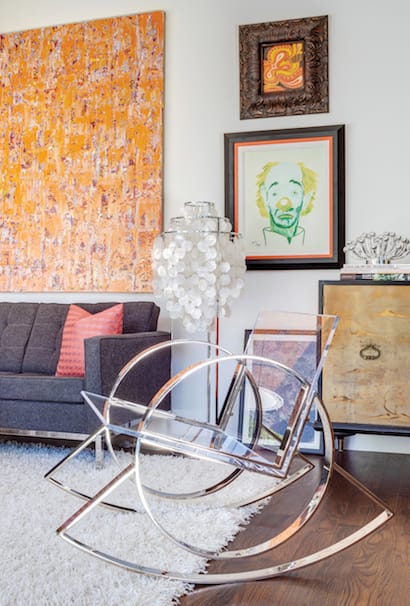 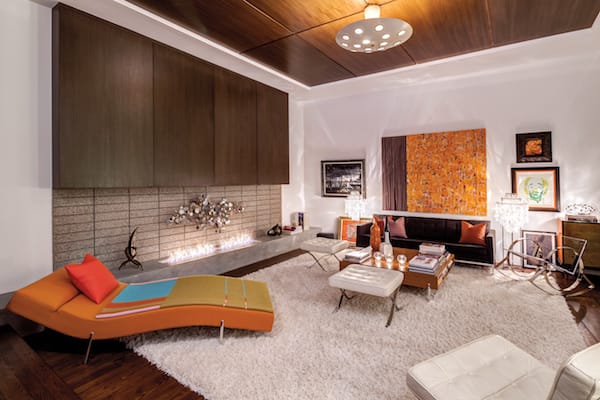 LEFT: The lucite-and-nickel rocking chair signed by Charles Hollis Jones dates to the 1970s. The print above it is of a self-portrait painting by Frank Sinatra, in which he depicts himself as a circus clown. RIGHT: A walnut-paneled ceiling with a 1960s Italian Lumi Disk Light complements walnut panels above a poured-in-place concrete fireplace. The panels conceal an entertainment center and bookcases. 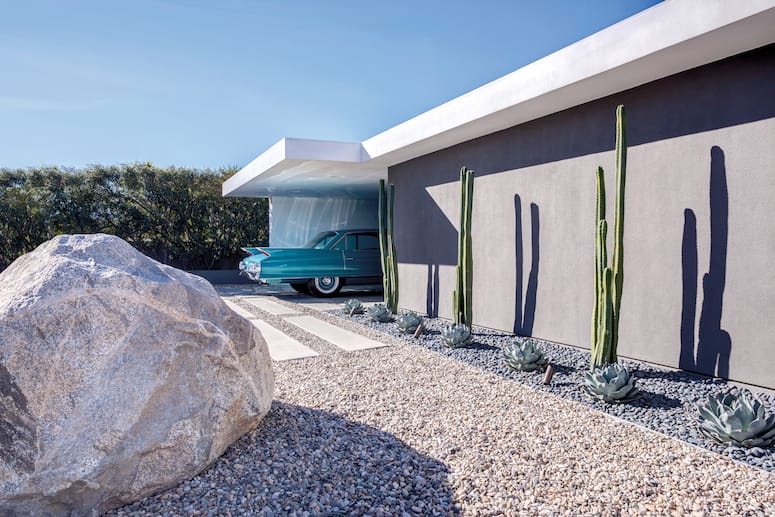