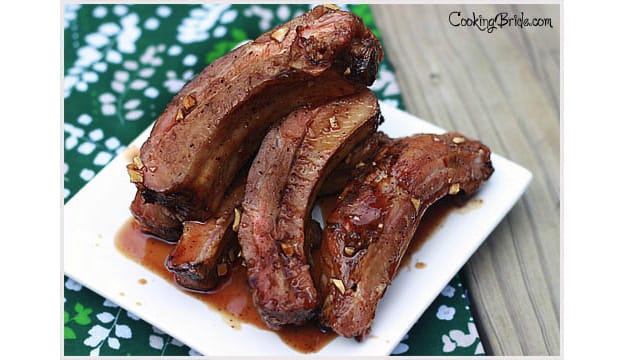 If corned beef and cabbage just ain’t your thing, here is another option – ribs marinated in none other than Irish beer.

Surprisingly, these ribs had more of an Asian flavor than you would have expected due to the sesame oil and soy sauce.  The recipe was a keeper just the same.

The husband loved these ribs.

Yes, they tasted good.  But that’s not the reason.

It’s because I had to buy a six pack of Guinness beer to make them.  I only actually needed one beer for the marinade.  So guess what happened to the remaining five.

Poor guy, our pocketbooks usually only allow us to buy brews along the Coors Light variety.  So the beer, in addition to the ribs, were a real treat for him.

Place ribs in a large pan or resealable plastic bag. Combine marinade ingredients. Pour marinade over the ribs. Place in the refrigerator and marinate for at least eight hours.

Remove ribs from the refrigerator. Discard the marinade.

Place ribs on the grill. Cook for 30 minutes, flipping halfway through.

Combine the glaze ingredients. Apply glaze generously on the ribs. Grill for an additional 15 minutes or until a meat thermometer reads 175 degrees.

Remove from the grill and allow ribs to rest for 15 minutes.