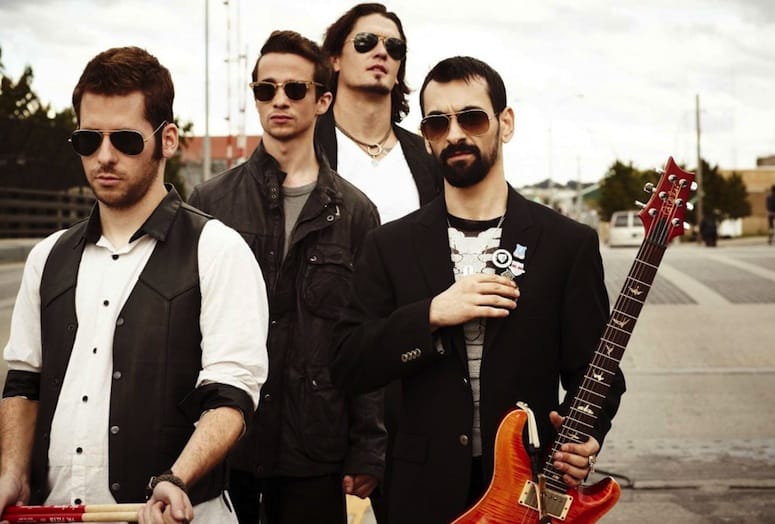 “Are you a Patriot?”

When former U.S. Navy veteran David Bray saw this question in a Facebook advertisement and clicked on it, the page opened up to an opportunity to play for a unique rock band focused on pro-patriotic music.

“I was an experienced musician. I’m also a veteran. I’m a decent songwriter. I’m mature…I wanted to find out,” Bray recounts. “I wrote ‘Soldiers of America’ and submitted it for the audition and they loved the video and song. I had been playing music for over 20 years and always wanted to do something different. This pro-patriotic band concept fit with what I wanted to do…to use music to stand together and fight for what’s right.”

In 2011, Madison Rising was formed with Bray, Sam Fishman, Tom DiPietro, and AJ Larsen. Together, the ensemble plays original and cover tunes to generate positive vibes and inspire gratitude for the good ole U.S.A. Some of their highlights have included:

• American Hero, the band's second album, was released in 2013 and is dedicated to military members, police, firefighters and other first responders; it reached Amazon.com’s top 100 and achieved No. 1 on its Classic Rock list.

• The band performs the National Anthem at various sporting events, including the 2014 Special Olympics USA, the Military Bowl, and the 2014 NASCAR Nationwide Series opening event.

Common themes in their originals include lyrics referring to nature, flags, glory, dogs, horses, trucks, and guns. Often compared to the likes of Creed and Stone Temple Pilots, Madison Rising’s uplifting renditions of God Bless America, America the Beautiful, and the Marine’s Hymn, for example, have been given cool make-overs to excite audiences in a classic rock style.

“What we bring as a rock band is energy, love of country, patriotism, and gratitude for the backbone of our country…soldiers, firefighters, policemen and women,” Bray says. “We celebrate the greatest country on the planet and what has made us free. We want a respectful way to wave a flag together and stand by our shared values and morals as Americans.”

Madison Rising is poised to get the crowd amped up on May 22 with a benefit concert at the Agua Caliente Casino Resort Spa to benefit Coachella Valley Kids Learning to Swim as part of the warm up to the Swim to Win weekend event at the Palm Desert Aquatic Center. Hosted by celebrated Olympic swim champions Rowdy Gaines and Janet Evans, the Young Marine’s organization will be on hand to assist and perform color guard on stage.