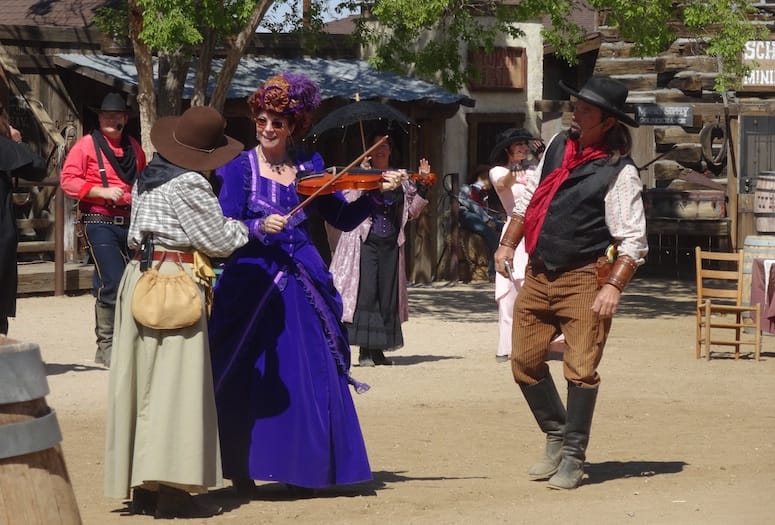 Her feminine, yet fierce, demeanor is polished from years spent as a Colorado saloon owner. As a settler in Pioneertown, Calif., circa 1800, this dame let’s you know she is one to be reckoned with. Think Annie Oakley or Calamity Jane…with a great sense of style!

Within a short drive to the high desert, you and your family can become immersed in a true vintage Wild West experience and catch a glimpse of Fontaine and her friends.

Reminiscent of a bygone era straight out of a historic movie set (Pioneertown was actually built in the 1940s for filming western movies), revel in the restaurants, shoppes, and live entertainment that make up this animated enclave. After meandering the dusty trail and saddling up for a sarsaparilla, check out the Mane Street Stampede Wild West Show, the perfect scene to get you in the spirit for an old time, good time, in support of great local causes.

Fontaine and her Wild West Stampede “gun fighting gang” will entertain with a variety of humorous skits centered around a small western town, a ccording to Raelene Wharff, the woman who embodies LuluBelle’s character and president of Mane Street Stampede Wild West Show.

Wharff says the amateur performers are all volunteers. “Most of us came from the Pioneertown Posse (a previous theatrical troupe)," Wharff says. "When that group decided to retire, they gave us permission to use their skits and props as well as their Saturday afternoon time slot to perform in Pioneertown. Most of us have always loved the old west. We grew up with Roy Rogers, Dale Evans, the Cisco Kid, Bonanza, The Rifleman and Gunsmoke. The show just gives us a chance to ‘dress up and play cowboys.’ ”

Three Things to Expect at the Show:

• “Lots of shooting (but not too loud because of the children in the audience).”

• “Lots of laughter that is family friendly.”

• “Every week we 'induct' kids as Stampede Deputies. The kids receive free bandannas, deputy badges, and a certificate for free ice cream from the local Del Taco – one of our sponsors.”

The Mane Street Stampede Wild West Show is free to audiences and takes place at 2:30 p.m. every Saturday, April through September. While the show is a free homage to an energetic time in California’s past, the troupe accepts donations from fans to support numerous children’s charities, programs, and organizations throughout the Morongo Basin.

“During the cooler months, two of our members bring their horses to the set," Whardff says. "After the show, the kids get to sit on the horses and have their pictures taken. It is a lot of fun for us, and a lot of hard work, week after week. It is something that people have come from all over the world to see. We have had audience members come all the way from Germany as well as from England.”