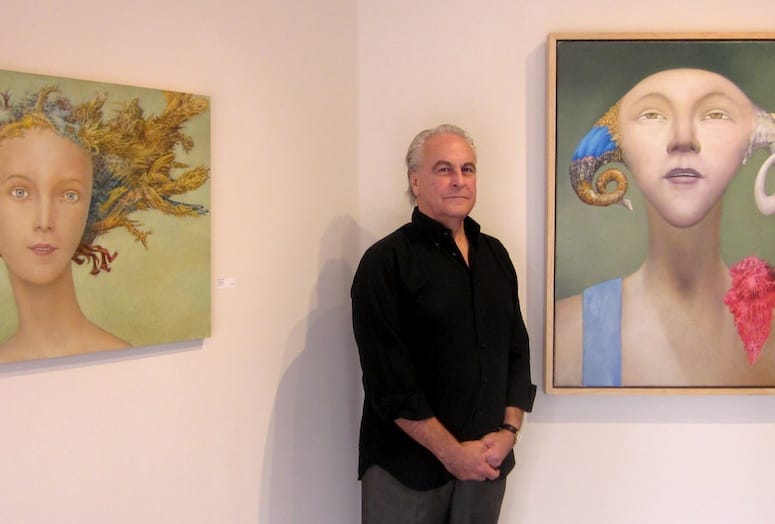 Mario Canali’s work is a conundrum.

Classically trained in Europe, this Italian artist went from painting like the Old Masters to digital art when computers were first introduced to Europe in the 1980s.

Unhappy with the quality, Canali created several 3-D virtual reality installations in which participants’ brain waives and heartbeats controlled the lights and music. Now, with his latest exhibit at the Brian Marki Gallery in Palm Springs, Canali returns to painting, which has become livelier because of his computer experience.

His 3-D installations were shown in museums, fashion shows and psychology conventions all over Europe. One in particular depicted a giant photo of an attractive woman with an entry in her abdomen (a port hole to the womb) in which people were invited to stick their heads inside.

“I was amazed that they actually did,” Canali says. “Some of them kept their head inside for a very long time.”

Lights and mirrors were located inside the “womb,” but that was the extent of it. Mario Canali with gallery owner Brian Marki before "Runner," which looks half human, half cheetah.

It could be better if we could tap into people’s chemistry, Canali recalls. Later installations used their brain waves and heartbeats to control the intensity and volume of the lights and music.

“People came back many times,” Canali recalls. “They said it was because it was a happy experience and different each time.”

An established artist in his native Italy, Canali is breaking ground in California, where he recently had a sold-out show at a Los Angeles gallery, which also benefited the Thalians, a charity for mental illness that was established by actresses Ruta Lee and Debbie Reynolds 55 years ago.

In January, Lee was on hand for the opening fundraiser featuring Canali’s work at the Brian Marki Gallery that also benefited “Operation Mend,” a veteran’s mental health program. The event was sponsored by the Italian Cultural Institute of Los Angeles.

Canali, Marki and Lee all have Italian heritage. Awhile back, Lee purchased one of Canali’s paintings.

“It shows an unusual dog chasing something, but I don’t know what,” Lee says over the phone from her Palm Springs home. “I’m impressed with the amount of detail in his work, and his wild and crazy mindset.”

Past series of Canali’s include “monsters,” as Marki puts it, which Canali morphs animals and humans. There’s a catalog of these creatures that look half-cheetah, half sheep, and half bird, with random parts from each.

“With animals, we often project our own emotions onto them, like violence with lions, and wolves,” Canali explains. “These ‘animale’ paintings always generate discussion.”

“AnimalOne” created in 1980, shows a half man (eyes, neck and shoulders) with a ram’s head and horns. Yet, at close inspection, the horns are not hard and sharp, but soft and worm-like.

“It looks like me, don’t you think?” Canali says as he stands in front of the painting. He uses “AnimalOne” for his Facebook photo.