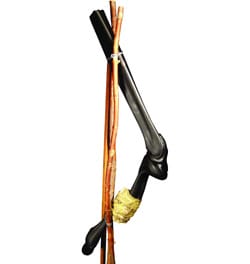 The role of the artist in times of war, historian Howard Zinn wrote, “is to transcend conventional wisdom, to transcend the word of the establishment, to transcend the orthodoxy, to go beyond and escape what is handed down by the government or what is said in the media.”

Even Picasso said, “Art is a lie that makes us realize truth.”

None of this crossed Michael Aschenbrenner’s mind as he lay in a San Francisco orthopedic ward for 11 months, recuperating from surgery to his knee. A paratrooper with the 101st Airborne Division on a reconnaissance mission in Vietnam, he fell down a mountain and tangled and twisted the knee in some vines. He walked on it for two days before being airlifted to Japan for the first surgery and then to the United States.

Aschenbrenner knows war is hell. And so is making Damaged Bones, the series he started (and stopped and revisited) seven years after returning from Vietnam. Ten years had passed before he confronted the source of his subject. “I saw a lot of people die,” he says. He also saw a lot of amputees. “It was haunting me in dreams.”

The glass sculptor’s process is a metaphor for his war experience. Rather than blowing the glass, he expresses himself physically and emotionally by stretching and pulling it. “Pulling makes for pieces that are substantial,” Aschenbrenner says. “They’re solid and heavy.”

Working from a puddle of molten glass, he must act fast and make quick decisions, which now seem intuitive. “Making art depends upon noticing things — things about yourself, your methods, your subject matter. [In my process] there’s a fluid movement, like a dance — through the hands, the tools, and into the piece. I learned how to control the material. I learned that I was doing this dance.”

And, like all good abstract artists, he learned when to stop, which bespeaks his integrity: If Aschenbrenner deems a piece overdone, underdone, or generally displeasing, the work never leaves his studio.

Each expressionist limb is bandaged with cheesecloth, surfaced with wax, which he sometimes colors with powder. He also affixes splints with “field-expedient” twine and rope.

Aschenbrenner’s other series represented in this month’s show at Denise Robergé Art Gallery include Sighting Devices. “I was a forward observer [in the military],” he explains. “We used our eyes and ears to locate where shots were coming from.” He also created hollow, blown, and stretched Flotation Devices and biographical Portraits. “Sadly, they’re all appropriate [images] today,” he deadpans.

This article was originally published November, 2006 and updated for the web June, 2007.