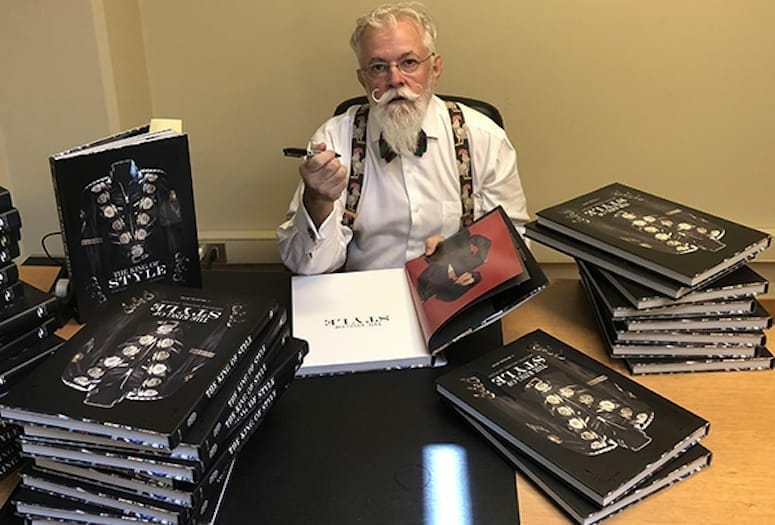 Michael Bush on designing clothes for Michel Jackson: "He had an 'I want the world to copy me' mentality versus being dressed by the conglomerate fashion houses. He wanted one-of-a-kind show clothes.
PHOTOGRAPHS COURTESY MICHAEL BUSH

If you’re wondering how an agricultural student from rural Ohio lands in Los Angeles and becomes a costume designer for such celestial figures as Michael Jackson, Elizabeth Taylor, and Britney Spears, well, it’s a circuitous story. Michael Bush dropped out of The Ohio State University to move to Las Vegas where he worked his way around town as a bartender and blackjack dealer before moving further west to Los Angeles. There he met his late partner, Dennis Tompkins, and joined him to work as a costume designer on TV series such as General Hospital. During a hiatus, the twosome got a call from Disney to work on what they believed was an industrial film, only to learn it was Jackson’s 3D opus Captain EO.

Bush and Jackson clicked so strongly that they began a professional partnership and friendship that endured 25 years. Bush chronicled their work which included many of the entertainer’s most famous costumes in his gorgeous 2013 book, The King of Style: Dressing Michael Jackson. In 2012, many of Bush’s creations worn by Jackson were sold in a record-breaking auction at Julien’s Auctions. On Nov. 9, Bush, a part-time desert resident, received a coveted star of his own on the Walk of the Stars in Palm Springs.

The designer chatted with Palm Springs Life about his work with iconic entertainers and what it means to receive local recognition for his work. 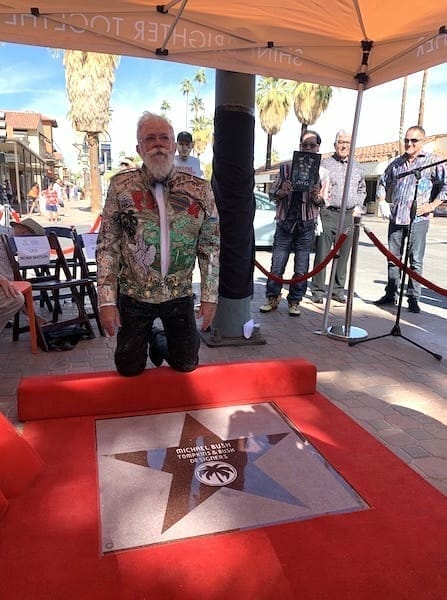 Michael Bush kneels before his Walk of Stars placque in front of Kaiser Grille in Palm Springs.

How did you first come to work with Michael Jackson?

We (Bush and Tompkins) were on summer hiatus (from General Hospital) and got a call from Disney to work on an industrial film, which was Michael Jackson's Captain EO, a 3D film attraction at the Disneyland Resort. We made the costumes and met Michael. They asked me to dress him. I was the onset dresser. And then from that, all of a sudden 25 years later I was still working with Michael. And Michael is one of those artists that could really inspire you to do things you didn't know you could do.

What qualities about you appealed to him and made him want to work with you?

I think I had a great ability to make him laugh. He was just one of those inspirational artists that was really looking for a friend and someone that would keep his personal life private. Michael wanted to challenge everybody with their ability and to do things that hadn't been done before. Michael's attitude with me was “have no fear.” He wanted to set trends. He had an “I want the world to copy me” mentality versus being dressed by the conglomerate fashion houses. He wanted one-of-a-kind show clothes.

Were any costumes too outlandish or sparkly for him?

Oh, no. The only thing off limits was fringe, because fringe was too distracting when he danced. Most of Michael's clothes were pretty tight because of his body movement. He said, “I'm not a fashion model, I'm a dancer.” The costumes had to show this. I got to watch him rehearse, just me and him, so I could watch his body movements and decide where to put the shiny buckles and the zippers. Michael taught me the human eye could see a flicker of a flame miles away and your brain is programmed for the eye to find the light. Michael wanted the guy in the last row to see what he was doing.

What was his casual wear like around the house?

It was just like everybody else’s. Michael loved pajamas. Sometimes at the studio we had pajama day. Michael did not wear his “Billie Jean” glove or his military uniforms at home. Michael was like everybody else. He was just this outrageous visual artist that when it came to showtime, it was over the top. At home, Michael was just corduroy shirts, black penny loafers, an average guy, but when it came to showtime, there were no limits. 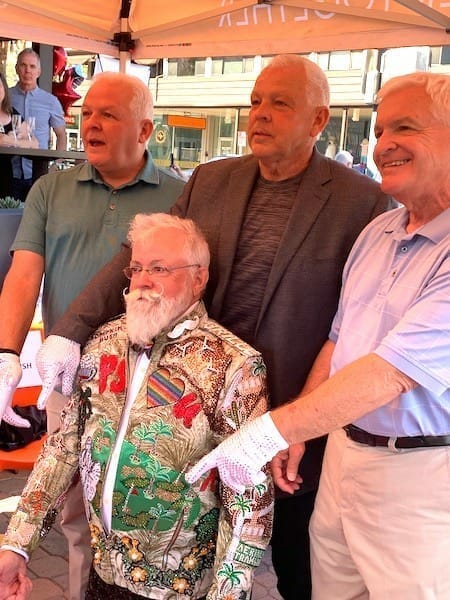 Michael Bush is joined by his friends to celebrate his day in Palm Springs.

Another legendary person and close pal of Michael’s you designed for was Elizabeth Taylor. What do you remember about her?

Elizabeth Taylor was the one that always wanted to mother you. She was extremely funny. She loved to laugh. Probably the most photographed thing we made for her is a jacket she wore when they closed Disneyland for her 60th birthday party. She was a Pisces, so we made a fish-skin jacket with two Koi fish and the Pisces sign on it. She got so excited when she saw it.

You designed Britney Spears’ famous red jumpsuit for her “Oops I Did it Again” video. What was your impression of working with her?

I said, "Britney, do you know I'm as old as your father?" And she said, "I don't care about that. I want your artwork. I want your ability to do show clothes." I think she wanted to work with me because I worked with Michael. She just wanted my expertise in making something she could dance in for a video that was being shot two days later. We stayed up all night, 24 hours, to get that made for her.

Congratulations on getting honored by the Palm Springs Walk of Stars. What does this mean to you?

It's an honor because I got to live through the celebration and see it. It's not happening after I'm gone. I relish in the moment of seeing it on the street. It's there forever.

You live part-time in Palm Springs. What are some of your favorite places to hang out in the desert?

Revivals, the thrift shop, is fabulous to me to go through. Kaiser Grille is one of my favorite restaurants. I like to sit at the bar and watch people walking down Palm Canyon. You can go into a restaurant and get the Frank Sinatra table. It's all ages now. Thirty years ago, it was more like the retirement center of California and now you've got people out at night with kids in baby strollers.

• READ NEXT: Bob Mackie Dishes About Designing for Divas Like Cher, Streisand.