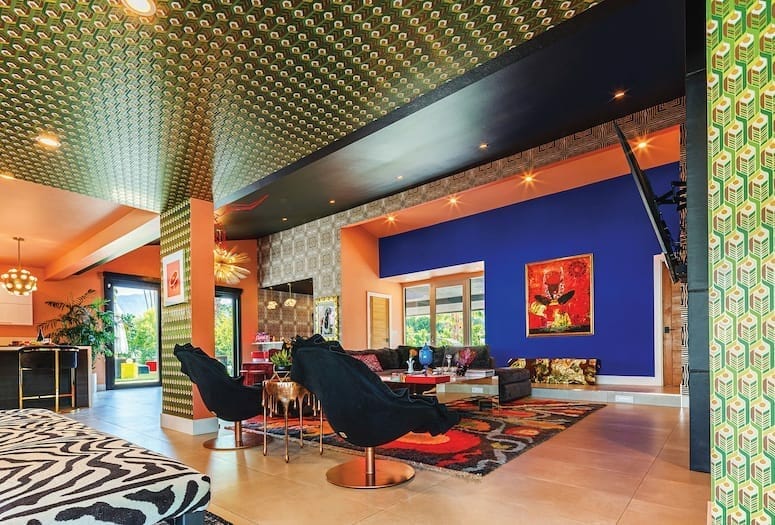 Interior designer Michelle Fahmy used color blocking to create zones in the open plan and drenched the ceiling in Tricorn Black from Sherwin Williams. In the living room, an accent wall in Yves Klein Blue from Resource Paints helps showcase Iron Wing, a painting by artist Anike Robinson. The sofa and coffee table are from Interior Illusions; a pair of Bloom Easy swivel chairs designed by Kenneth Cobonpue upholstered in black make another dramatic statement.
PHOTOGRAPHY BY SEQUOIA EMMANUELLE

There’s the notion of what most people think of as bold, and then there’s truly, unmistakably bold. When the time came for a new vision for their 1963 Deepwell Estates home, television producer and showrunner Karin Gist and TV producer Claire Brown turned to interior designer Michelle Fahmy of Los Angeles–based Haus of Meeshie for the right degree of authentic fearlessness.

“I can do the minimal and the neutral, but I gravitate toward clients and people who are risk-takers,” Fahmy says. Gist and Brown “live a lifestyle that’s representative of that as well.” For a couple who were married last year at Borthwick Castle in Scotland, a site with historical ties to Mary, Queen of Scots, this assessment sounds fitting.

A few months after purchasing the home, the pair were ready to put their own unique stamp on the property and work with a designer with a collaborative spirit. Decorative arts painters Lisa Donohoe and Brynn Gelbard, the duo behind Londubh Studio, recommended Fahmy. “It was love at first sight,” Fahmy says of the initial meeting. Everyone wanted to go big and agreed the elements could be dialed back if need be. “They were the perfect client for that, because they said it, and they meant it.” 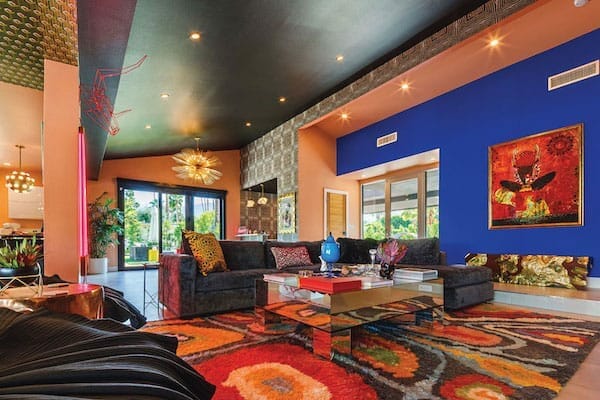 “We are both creative individuals and wanted an inspiring space that represented our inner wild child,” Brown says. “We let Michelle take full control and never looked back.”

While the flexibility was appealing, Fahmy, Gist, and Brown wanted to differentiate zones. The designer used color blocking and intentional pattern placement “to create each area so it’s open but doesn’t feel like a big box.”

“‘The eye has to travel,’” Fahmy declares, invoking a famed Diana Vreeland quote and philosophy. Despite the juxtaposition and contrasts, “it’s important to have a through line so that it all makes sense.” So, starting with a vintage bar cart newly powder-coated in a neon yellow hue, a dramatic wicker canopy outdoor daybed, and modular sectional seating in the ficus-edged front yard, Fahmy explains, “there’s a color and pattern story that goes throughout the house from the moment you walk up.”

“I gravitate toward clients and people who are risk-takers.” 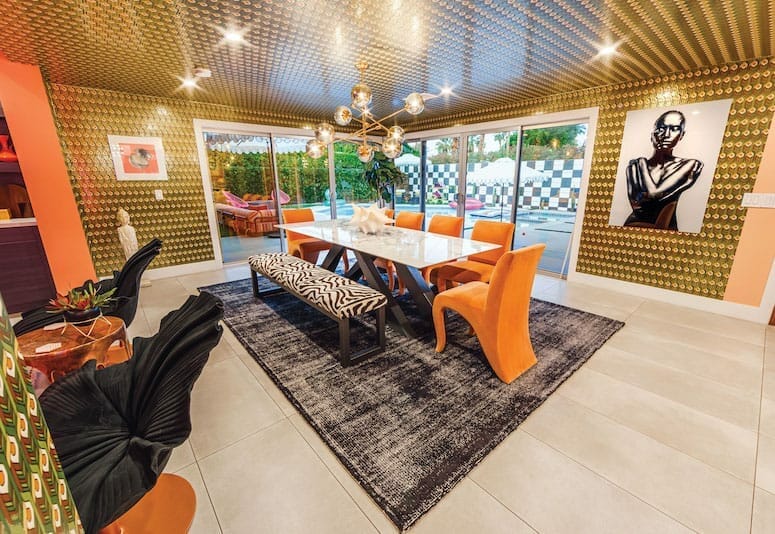 The dining room is swathed in a custom green and gold version of Neowise wallpaper designed by Londubh Studios, the specialized artisans who connected the designer with her adventurous clients.

Gist and Brown wanted to highlight specific pieces, including a painting by Anike Robinson. A living room wall painted Yves Klein blue gives the work “its moment,” with a highly tactile, organic bench from Phillips Collection composed of bronze powder and wood placed below. The intense color plays against the peach walls and Serengeti print wallpaper by Mind the Gap that extends to the bar. Brown’s wall-mounted wire steer-head sculpture from Bend Goods has its special place, too. For the foundation of the living room, a Moroccan Berber rug offers a “burst of color and pattern,” Fahmy says. “It will wear easily with foot traffic and a dog and is a whole new take on a high-traffic rug.”

The tricked-out bar helps jump-start the energy at any gathering, with statement Geo glass pendants handmade by Los Angeles multidisciplinary design talent Jason Koharik, and customized tiered fringed stools that Fahmy sourced from Spain-based maker Houtique via 1st Dibs. “They arrived a week before the install, and they were absolutely worth the wait,” she says of the supply chain–challenged item. A photograph titled Smokin by Gregory Prescott adds to the relaxed, let-loose vibe. Local shopping trips to Bon Vivant proved to be paricularly fruitful for vintage glassware and accessories. 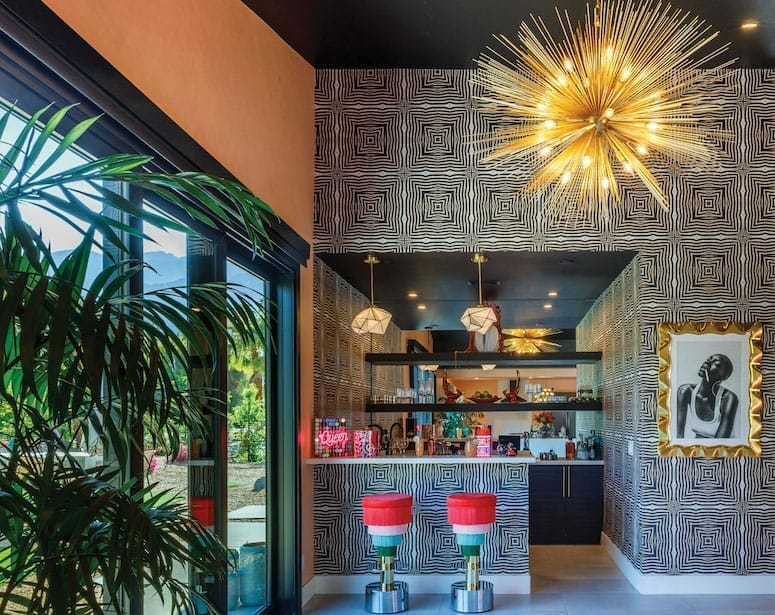 Serengeti wallpaper from Wallpaper Compendium Collection by Mind the Gap differentiates the bar area. Geo glass pendants by L.A. designer Jason Koharik and a Kelly Wearstler Strada chandelier bring bling. Fahmy sourced the fringed barstools from Spanish brand Houtique on 1stDibs. Photograph by Gregory Prescott.
Because the dining room doubles as an office, Fahmy needed to make working at the table comfortable. Curvy vintage chairs and a bench upholstered in a Schumacher zebra-print fabric make that happen. “I consider black and white a neutral in any form,” she laughs. The bonkers-in-the-best-way-possible wallpaper came from the source that brokered the designer-client introduction; Fahmy was among the first to use Londubh Studio’s Neowise pattern wallpaper in a project, tweaking the motif with a custom green colorway on gold mylar that completely envelops the room. Along with other lighting loosely inspired by the Space Age, the Accelerated Returns chandelier by ELK Lighting adds more whimsy. In the kitchen, a peach and black scheme gives the space a fresh identity. 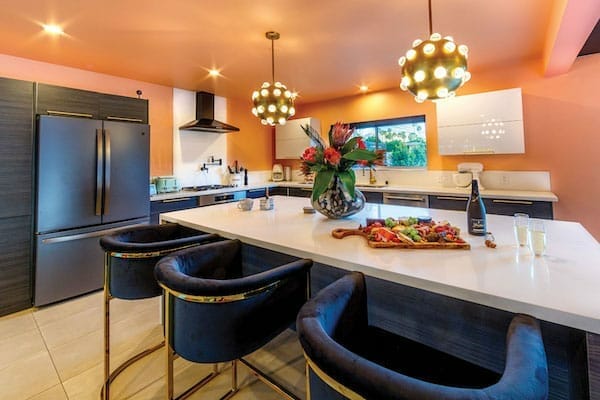 The kitchen is awash in Sherwin Williams Certain Peach. Glam Varsha pendants from Arteriors illuminate the peninsula counter. Stools by Everly Quinn.
Fahmy coordinated the styles, materials, and components to avoid coming across as “typical Palm Springs,” while still being able to “give a nod to that retro style.” The bedroom décor choices also reflect this goal.
Superstar wallpaper originally designed in the 1960s by Phyllis Morris and L.A. artist Robert Pritchard emblazoned with a pattern of a black-and-white face in silhouette sets a Warhol-esque backdrop for the blush upholstered bed frame from Interior Illusions. Fahmy also sourced various 1960s and ’70s items on Chairish, while Kelly Wearstler pendant lighting flanks the bed. 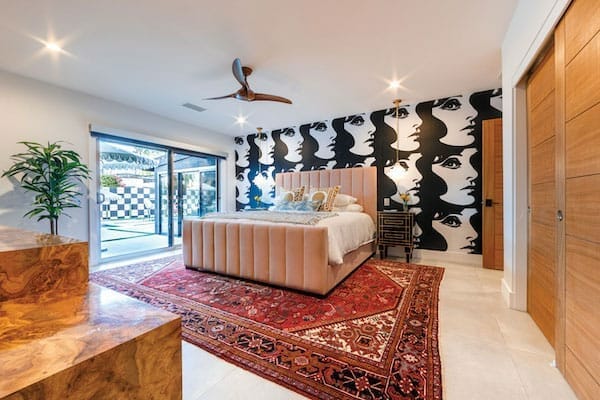 The Superstar pattern wallpaper designed in the 1960s by Phyllis Morris and L.A. artist Robert Pritchard provides the showstopping moment in the primary bedroom. Circa Wallcovering makes it available today. Vintage pieces found on Chairish, such as the dresser and Persian rug, fill the space along with an upholstered bedframe from Interior Illusions and Kelly Wearstler–designed pendant lights.

“We wake up every day so grateful to live in an incredible home.” 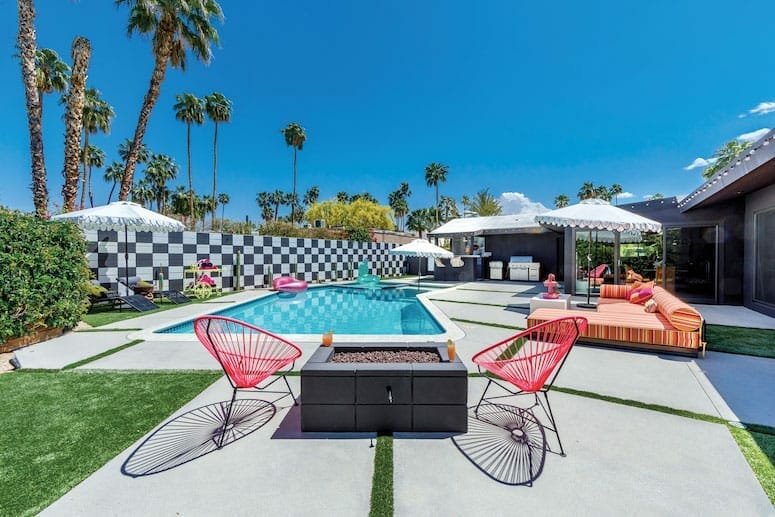 “The backyard was this blank slate,” recalls designer Michelle Fahmy of Haus of Meeshie. “The first order of business was to give it an overhaul.” The black surfaces and checkerboard wall pack a punch — and on a budget. Fahmy recovered a CB2 Bizerte sectional sofa in Sunbrella’s Dolce Mango colorway. Adding Tiki side tables, Acapulco seating, and outdoor umbrellas from Safavieh transformed the  area into a party pad. 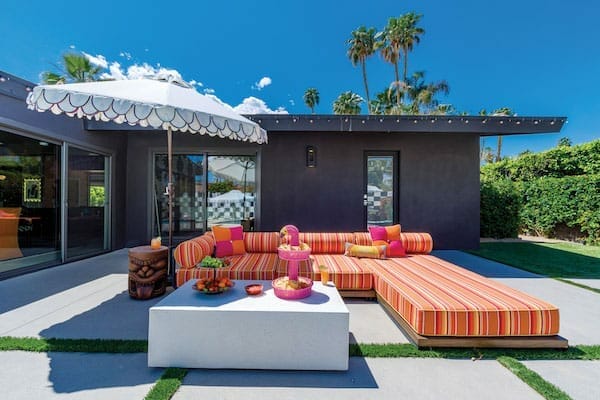 “The backyard was this blank slate,” Fahmy notes, so a priority was transforming this area and the front outdoor zone into a welcoming, fun space for entertaining. She added palo verde trees and podocarpus hedges for privacy at the front of the property. Painting an exterior wall with a checkerboard pattern instantly transformed the pool area — and it was budget-friendly. Further jettisoning anything staid and predictable, Fahmy recovered an outdoor sofa from CB2 and filled in the backyard with Acapulco-style seating and Tiki-inspired carved side tables.

In their careers, Gist most recently created the series Our Kind of People, on which Brown works as an executive producer. In their downtime, they’re lounging by the pool or entertaining at their atypical home, which could pass for a Hollywood set. “Our Palm Springs home is our best friend,” Brown says. “We wake up every day so grateful to live in an incredible home.”

Fahmy thinks about the project and her clients in even more exuberant terms. The house “makes them feel like they’re queens walking into their palace. And this is their palace.”