Classic TV Dinners - Midcentury Cuisine in all it's Bad Glory 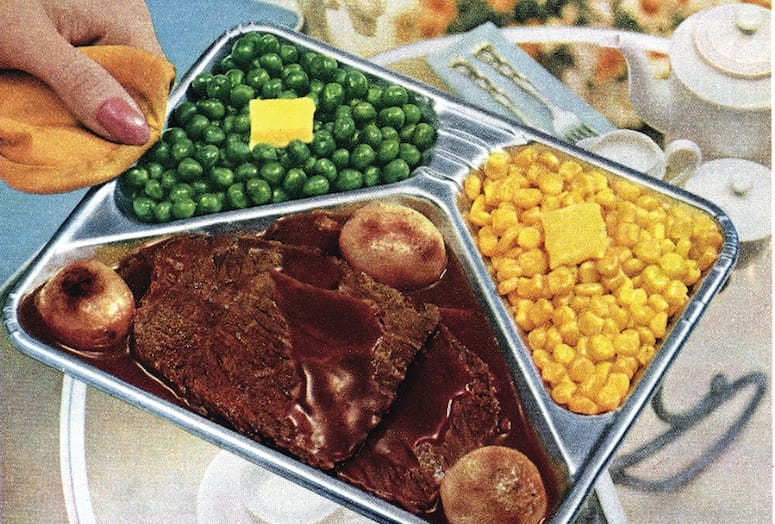 When my sister and I were young, my mother decided to get her master’s degree. She was gone most weeknights for the next couple years.  My father, who was a master of the steak and charcoal briquette pas de deux, was less adept inside the house.

But nobody panicked. It was the ’60s. Processed food was at its height. It was still being praised (widespread ridicule and revulsion were still a good decade away) and employed by many an American domestic engineer who far preferred defrosting to chopping, peeling, grating, and deveining.

Wednesdays were Mexican Night. Being multigenerational Californios, we eschewed the inauthenticity of Van de Camp’s frozen Mexican dinners. Instead, we opened a can of Rosarita’s refried beans and got the XLNT tamales out of the fridge. My father often paired the XLNT tamales with canned Hormel tamales. He liked them because they came packed in sauce. At least I think it was sauce.

It was reddish, brown, and viscous, so it might’ve been axle grease. Once the XLNT tamales had been steamed, I would make a depression in the middle with a spoon and fill it with diced, canned Ortega chiles, then cover the concoction with an individually wrapped slice of Kraft yellow cheese. On top of the melting cheese, I would sprinkle Tabasco sauce and pronounce it “muy autentico y sabroso.”  Kraft singles were also applied to the refried beans. It was years before I learned that cheese and the color yellow were not synonymous. To complete the meal, my father would chop up half a head of iceberg lettuce and drench it with Bob’s Big Boy Thousand Island dressing because, God forbid, our banquete should not be as nutritious as it was delicious. Thursdays we had Salisbury steak, mashed potatoes, and frozen peas. When  Swanson’s did not provide this meal in its perfect compartmentalized tray (where to my young obsessive delight the portions did not touch and thus contaminate each other), the three of us actually prepared the meal from scratch … “scratch” being Shake ’n Baking cube steak, and dumping a frozen block of peas in boiling water. I cannot recall whether mashed potatoes were from a living organism or a box. It was probably the latter. At the end of these meals, my father would often proclaim packaged food to be superior because “there’s less clean up.”

There is no mystery for me in the almost cultlike enthusiasm for midcentury modern architecture and design. Whether it’s a Bakelite bracelet or a Barcelona chair, there is absolutely no denying the perfect harmony of 20th century technology and art. It doesn’t matter if it’s cars, toasters, apartment buildings, couches … it’s impossible not to appreciate the vision, if not to covet the object.

The same cannot be said for midcentury cuisine. It looks bad, tastes worse, and consumed over decades surely must kill you. Whoever first decided that food and technology were meant to comingle and produce offspring was delusional. Maybe evil.

I understand the nostalgia as well as the next guy. I’m not above the occasional can of deviled ham, a Pop Tart, or a frozen chicken pot pie. Not long ago, my wife and I were shopping at a local box store. Impulsively we grabbed a couple frozen TV dinners whose menu items we hadn’t tasted since junior high school. We heated them up that night as an ironic companion meal to Downton Abbey. I took a bite of my “entree” and spit it out.

Emily chimed in with mock indignation and the punch line of an old joke: “And the portions are small!”

Still, it can’t have all been bad, could it? What about my mom’s Caesar salad and my grandmother’s meatloaf? Or my Aunt Myrtle’s tomato aspic? On second thought, let’s forget Myrtle’s aspic. A quick tour online produces a surprising number of websites dedicated to the weird molds and casseroles mom or grandma offered up at dinnertime. Retro Ruth in Midcentury Menu is a particular favorite, though I suspect that sometimes she searches out only the most grotesque recipes to test on her long-suffering, but game, husband.

Kurt Cyr, a Palm Springs renaissance man who has not only garnered a reputation for his modernism tours and popular lecture series/social gathering, Salon of the Parched, became fascinated several years ago with the question of why people who love midcentury architecture revile the food. His discoveries resulted in ModEats, a demonstration/cooking series he put on at the Saguaro Hotel. “If we are going to talk seriously about midcentury food, the spectacle of kitsch draws the focus away from one important factor that we take for granted today,” he says, “[And that is] the revolutionary discoveries of food science during this period.”

I understand the nostalgia as well as the next guy. I’m not above the occasional can of deviled ham, a Pop Tart, or a frozen chicken pot pie.

In fact, Cyr believes the work of world-renowned chefs such as Ferran Adrià of elBulli, would not have been possible without the trailblazing work of the mad food scientists at General Foods or Nabisco. “Molecular gastronomy is definitely the grandchild of the food science discoveries of the 1950s,” Cyr says, pointing out that the balsamic vinegar pearls that top modern deconstructed Caprese salads would not be possible without the invention of … Jell-O.

“Sodium citrate forever revolutionized how we see cheddar, Swiss, or Monterey Jack. When added to cheese, it emulsifies with the oil and allows the cheese to melt smoothly, not into greasy globs. You’ll never look at nachos quite the same way again.”

So, really, there’s not that much difference between the former elBulli’s Tapioca of Iberian Ham and a good Spam loaf with Velveeta frosting … except for price, taste, nutritional value, ambiance, digestibility, and cool factor.  This tells me it’s time to take a serious look at the little wood box of recipes I inherited from Grandma Mabel. There are possibly a hundred or more recipes cards crammed into the box, all handwritten.  It’s difficult to choose the recipes that best represent that magical time. I must choose wisely.

I come away with deviled eggs and salmon mold. I double-check the cards to make sure the latter is not a fungus that grew under the seaside floor boards where grandma lived.

It calls for a 16-ounce can of king salmon. Check.

Before attempting the recipes, however, I realize I am short the rare and essential serving dish and cookware for these recipes. I go to eBay and bid. I am instantly rewarded with a gold glass deviled egg tray and a copper salmon mold ($6.55 and $8.99, respectively). Both items are located in Indiana. It may be that midcentury cuisine only recently went out of favor in the Hoosier state and residents are getting rid of items they now consider obsolete. Tragically, by the time Indiana realizes this cuisine has made a comeback, the entire state will be stripped of such treasures.

The salmon mold, though, has me worried. The ingredients are fairly straightforward (more Best Foods mayonnaise), but the critical mating of gelatin and fish salad is only cryptically referred to (“combine, pour into mold, refrigerate”).  It can’t possibly be that easy, can it?  It takes all my willpower not to raid the fridge for fresh dill, capers, and red onion, but I’m a grown man. I’m tough. I’ve faced more hideous recipes, and survived.

The next day I carefully score around the edges of the salmon mold and dump it gently on a bed of cucumber slices I hope looks like a green sea. The salmon mold quivers. I slice two olives with pimento and give it eyes. It’s super creepy, like a crazed fish that has expired after molting.

Eating it takes even greater will power than making it. I dig a Ritz cracker into the tail. I munch. Actually, not so bad for gelatinous salmon and mayo. It’s the kind of appetizer that would go well with a very strong whiskey sour. In fact, the whiskey’s pretty much a requirement.

It reminds me of the time I had made Thanksgiving dinner for friends in Copenhagen. Sourcing the ingredients is a saga in itself, but suffice to say I was exceedingly proud to lay down the proper fixins’ in front of my friends. Then, I realized they were staring at their plates in mute horror. Decades of our annual feast had dulled me to the fact that a T-day dinner looks like a mass of brown and beige with the one splash of color — cranberry sauce — oozing like a gaping wound.

My friend Leif finally screwed up the courage to dig in. He took several forkfuls and chewed thoughtfully. Finally, he turned to me. “It’s incredible,” he said, “how something that looks so bad can taste so good.” INSTRUCTIONS
• Mash the hard yolks with the olive oil until it is a smooth paste with no lumps. Add the other ingredients and whisk. Add the mayonnaise one teaspoon at a time until the desired consistency is reached.