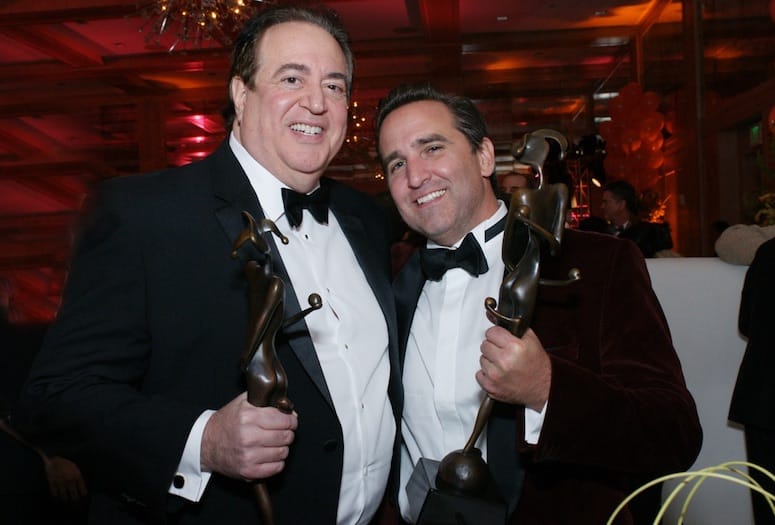 Nick Vallelonga and Mike Hatton, who were part of the Oscar-winning film, Green Book, are back together in a new film being shot in Greater Palm Springs.
GREGG FELSEN PHOTOGRAPHY FOR PALM SPRINGS INTERNATIONAL FILM FESTIVAL

Nick Vallelonga, who co-wrote and produced the Academy Award-winning film, Green Book, and Mike Hatton, a producer and actor who played the bass player in the 2019 movie, will help launch a speaker series by Palm Springs Women in Film & Television (PSWFT) on Feb. 20 in Cathedral City.

Hatton, who has local ties as a former TV reporter for the CBS affiliate in Palm Springs and now resides in Los Angeles, returned to the desert last year when Green Book received the Vanguard Award given to the film’s director and cast by the Palm Springs International Film Festival. The duo took a few minutes to talk to Palm Springs Life in anticipation of the event at the Mary Pickford Theater in Cathedral City. (Tickets are $25 for PSWFT members and $35 for nonmembers).

What are you going to talk about?

Nick: I assume we’ll talk about Green Book and how I got that done, and about other projects. It’s their event, so anything they want to talk about.
Mike: I hope we can be inspiring. We were here at the film festival last January [2019] with Green Book and won the Vanguard award. I had been a volunteer for the film festival in the early 2000s, and here I was on stage with a great film. I love to talk about that, because it was full circle. I’m here to tell people dreams really do come true.

Both of you have connections to the area, albeit different kinds. Can you talk a little about that?

Nick: I come out here to write; it’s a good luck charm. We wrote the first draft of Green Book in a home in Toscana [Country Club] in Indian Wells. I was just out [in January] for a couple of weeks to finish a couple of things [this time at a hotel resort]. It’s my go-to place for getting things up and running. It’s peaceful and calm, and has a good vibe for me to write.

Mike: I helped open CBS 2, when it came to the desert, and am a former Eye on the Desert reporter. That was in the early 2000s. I’ve since moved into acting and producing full time. Green Book was a dream come true — I knew when we were making it we would win an Oscar, and said so. I still live here part time.

On that note, I understand you’re finishing a movie you shot in the desert. Can you talk about the project yet?

Mike: It’s called Pay Dirt, and it's Christian Sesma’s new movie. He’s a major talent, he wrote it and directs. It’s about a parolee who teams up with his old crew to find cash stolen from a DEA bust a decade earlier, and a sheriff on their tail. We made it a point to shoot it here, almost all of it, local crew. We’ve had great support from the various film commissions. It stars Val Kilmer and Luke Goss, and Nick. And me.

Nick: Before I was a writer and producer, I was an actor, so Pay Dirt gave me a chance to get back to what I love. I play Leo, a boss at Fantasy Springs Casino. My character is pulling all the strings and integral in getting Val and Luke’s characters to meet up.

What made you want to shoot it here?

Mike: Christian Sesma. We've been producing partners on various projects for years. He's born and raised in Palm Springs and still lives in Cat City. We want to support the area and the growing film community but this is also just a great place to make a movie. There is amazing support for filmmakers. Mayor Steven Hernandez and the City of Coachella — and the Cabazon Band of Mission Indians (Fantasy Springs Casino) — really made [shooting Pay Dirt] possible. And others, like the Riverside County Film Commission, which helped us with the Salton Sea.

Okay, last question. How did you get involved with PWFT?

Nick: I get asked to speak occasionally, so I’ve done things like this before. Mike brought this up, so I said I would do it.

Mike: It’s a great organization. I know Kim Waltrip [a producer and president of PSWFT] so I know it will be a great event.

For more information and to register for the event, visit pswift.org.

CONTACT US: Are you hosting an event that might make an interesting online short story or Q&A in advance? Send an email to james.powers@palmspringslife.com.