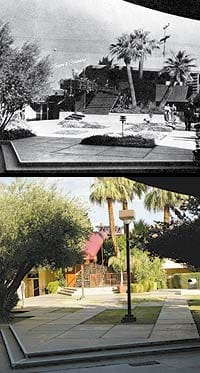 With all the recent attention paid to Palm Springs’ midcentury modern style in books, magazine photo shoots, commercials, and movies, you might think that most of the city’s architecturally significant buildings have been acknowledged and renovated.

The truth is that Palm Springs has dozens and dozens of significant historic properties that are hard to recognize today. Some have been added on to or “remuddled” beyond recognition, some are now crowded by other buildings, and some simply don’t allow their architectural attributes to shine. A surprising number of buildings designed by famous architects have been neglected or demolished, and others are threatened with demolition.

Robert Imber, who gives architectural tours of the city through his company, Palm Springs Modern Tours, points out any number of hidden architectural treasures. For example, everyone knows about the Albert Frey and Robson Chambers-designed Tramway gas station that is now the Palm Springs Visitors Center, but not as many know about the William Cody-designed gas station at 2796 N. Palm Canyon Drive, built in 1964 and still in operation. Its dramatic poured-concrete roof resting on simple structural columns is hard to appreciate because of a large snack shop addition in the front.

Then there’s the original Saks Fifth Avenue building at South Palm Canyon Drive and Ramon Road, designed by famed Los Angeles architect Welton Becket. The building, marred by a wildly out-of-scale sidewalk structure added in a later decade, now stands gutted and empty and is endangered by potential development. But its graceful, pressed-brick shadow wall still creates different patterns as the day goes on — a reflection of how midcentury architects were sensitive to the desert lighting and climate.

There’s the former Robinson’s department store at 333 S. Palm Canyon Drive, a building designed by William Pereira and Charles Luckman, who, like Welton Becket, are among highly acclaimed American architects. Commissioned in 1953, it has a folded-plate roof that echoes the mountains and tapered steel columns that resemble stylized cacti. Originally, distinctive thin steps with deeply angled risers ran the length of the building. They have been altered with what looks like a retaining wall. Also, the building’s perfectly centered glass-front doors have been moved to the corner and wide, terrarium-like window mullions made narrow and more pedestrian.

If you’re looking for a true diamond in the rough, there’s the now-shabby industrial park off North Indian Canyon Drive designed by William Krisel, the main architect for George Alexander Construction Co. Most likely built in the late 1950s, the tall concrete-block spaces have soaring ceilings and large front and rear doors.

Pictured here are a few of Imber’s other favorite architectural gems that you may have passed by without noticing.