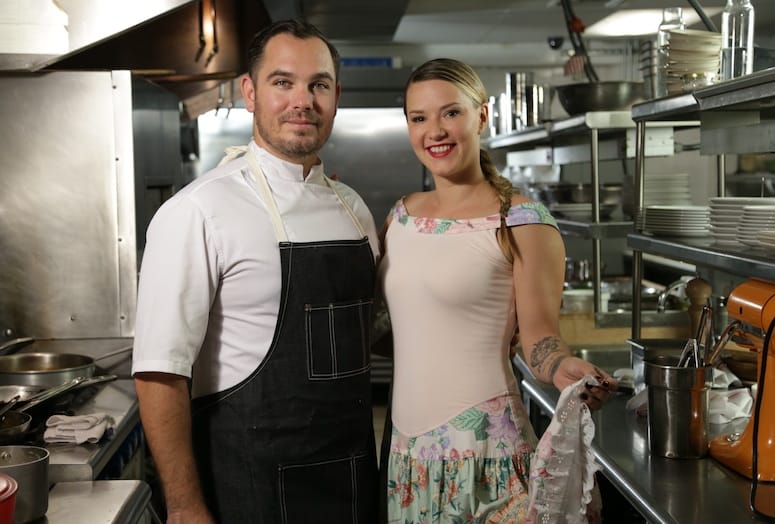 Nadia Giosia, known better as just Nadia G., has found a combination probably better than anything she can make in the kitchen.

As the host of a new Cooking Channel show, Bite This with Nadia G., she gets to expound on her knack for finding the hilarity in cooking.

“It’s an amalgamation of my passion for comedy, stuffing my face with delicious grub, and harassing strangers,” she says.

So what we see on TV is who you are?

“Pretty much,” Nadia says. “It’s definitely an extension of my personality. Kind of like me, but four vodkas in.”

The comedic inserts are a driving force of her show, which came to Palm Springs this summer to visit three locations and will air the result at 10 p.m. Oct. 2 on The Cooking Channel.

Nadia visited Kings Highway at the Ace Hotel & Swim Club (where she says she normally stays on her escape weekends from LA), Workshop Kitchen + Bar, and Over the Rainbow Cupcakes. At Kings Highway, you were served green eggs and ham (pictured at right). Was it anything like the Dr. Seuss book?

“I didn’t know what to expect. It was such a unique take on a benedict, Chef Russ Sevilla has a background in South American cuisine and he concocted this benedict that utilized avocado and spinach. It was spicy and fresh.”

What did you find out about Chef Russ that we will see on the show?

“We like to make the chefs extremely uncomfortable. We do a lot of research beforehand, and one thing we found out about Chef Russ was that his Mum taught him to cook because she thought he would never get married. So we went on a mission to find out what traits Rich has that makes him so ummarriedable. You’ll have to tune in to find out.”

What did Chef Michael Beckman serve you at Workshop Kitchen + Bar?

“It was really one of the best cannelloni’s I’ve ever had. Growing up Italian, I tend to eat more traditional cannelloni. It was a very high-end dish. It was really exquisite. That is pretty cool because when you go to smaller vacation towns, sometimes the higher end of the food spectrum can be lacking, but definitely not in Palm Springs or Workshop Kitchen.” And was your sweet tooth satisfied at Over the Rainbow Cupcakes?

“Chef Roman (Blais, pictured at right) is hilarious. He uses the finest, all organic ingredients for his cupcakes. One thing I love is how creative he is. I’ve eaten a lot of food, so to be surprised by dishes doesn’t happen too often, but this cupcake was out of this world. We also happened to surprise Roman with a cupcake of our own.”

How does this new show differ from your previous one, Bitchin’ Kitchen?

“There are some similarities. Definitely a comedy-driven show. The crew is with me doing their absurd reports. It’s different in the sense that I’m not relating to the vegetable I am cutting in front of me. I am actually having a laugh with the chefs. We have gotten out of the kitchen and into a space that is more interactive, which makes it a lot of fun and funny.”

Bite This with Nadia G air at 10 p.m. Oct 2 on The Cooking Channel, www.cookingchanneltv.com/shows/bite-this-with-nadia-g.html