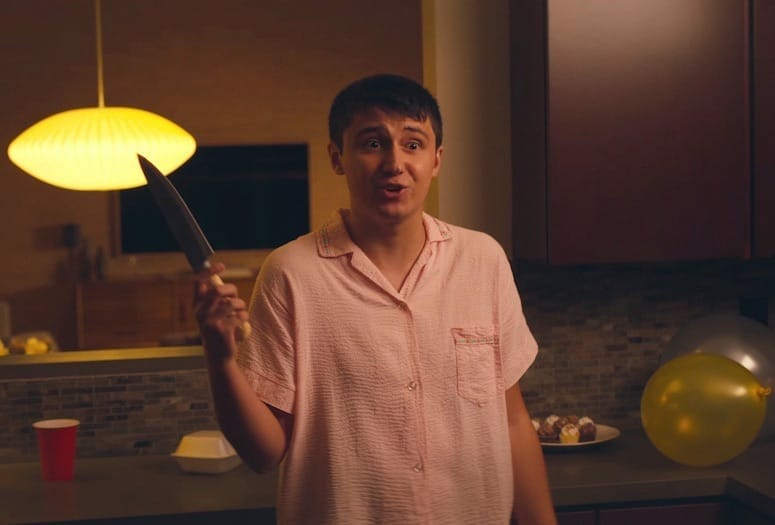 Neal Suresh Mulani directs and acts in his film, Tell Me Something I Don’t Know, which screens June 24 during the Palm Springs International ShortFest.
PHOTOGRAPHY COURTESY NEAL SURESH MULANI

You may not realize it, but when you watch the film entry from Neal Suresh Mulani in the upcoming Palm Springs International ShortFest, you’re actually getting to know a part of him.

What you watch may not be exactly drawn word for word from Mulani and his life experiences, but the emotional connection to the material is very real and the questions that they create about who he is are some he has given great thought to confronting.

“Film has always been a way for me to better understand myself and the emotions I feel and the experiences that I go through when I can't really make sense of them,” says Mulani, a Boston native who is a recent graduate of the Film and TV Production program at the University of Southern California. “Film has such a power to depict things experientially that I don't think you get in other mediums. Just that it gives you the avenue to experience things so deeply and viscerally that sure, music and theater and television sort of satisfy in different ways, but yeah, I think that there's something really, really unique about what film offers.”

Tell Me Something I Don’t Know will be the second film by Mulani to screen at ShortFest after debuting his work with From The Top during the festival’s virtual edition in 2020 after the pandemic shut down in-person events. Typical of many of the efforts you will see at ShortFest, Mulani not only co-wrote the script and directs the 15-minute short, but he also acts in it. Depicted to take place in Greater Palm Springs, the film was actually shot at a house in Sherman Oaks.

Cast members joining Neal Mulani at the house are (from left) Tyler Joseph Ellis, Shannon Sheridan, and Sahil Kaur.
The premise is how Cary (played by Mulani), a queer twink, lures his friends to hang out at a desert rental on his 25th birthday where he challenges them to tell him what the hate about him. Mulani says he typed in the plot idea on a document he keeps on his smart phone when he was a senior in college.

“It was just a time where it felt like everybody was so sick of each other, living down the hall from each other, as you do in college, going out together on the weekends, having all your classes together, it just felt like everybody was kind of on thin ice with their own friendships,” Mulani explains. “And so I went out one night with someone who is still a really good friend of mine. But we were just really kind of getting tired of each other. And I think you reach a certain sense of complacency in friendships that have lasted several years, where neither of you has the gumption to say what is bothering you about the other person.”

“So it was really kind of like this perfect blend of fiction and honesty from my own experiences that I want to keep trying to mine from as I continue to make films,” Mulani adds.

Palm Springs ShortFest will screen 300 films from June 21-27 at the Palm Springs Cultural Center. Tell Me Something I Don’t Know is one of five shorts in the category, Friends Like These, that screens at 3:30 p.m. June 24. Mulani chats further with Palm Springs Life about creating a film in there days during a pandemic, what he derives from revealing something about himself in the film, and where his passion lies in filmmaking.

Did you have to do anything to the house to give it a desert vibe you wanted?

We just really wanted it to feel like this sort of elaborate, gorgeous Airbnb, but with if a small group of 20-somethings had inhabited it for the weekend. So just things strewn across the floor and empty cups and bottles. And so the house really did so much of the work. But our production designer, Charlotte, really had such a impeccable eye for rearranging things in the frame and making the space feel like this lush, warm house, but kind of almost cold in how lightly used it is and how empty the space sort of felt.

VIDEO: View the trailer for Tell Me Something I Don’t Know.

What challenges dd you face making the film. Obviously, Covid created issues, but what else?

“So we shot this at the peak of the Delta variant in late July, early August 2021. So it was just a very confusing time because I think in LA there were a lot of sets going back to work since so many people had just been fully vaccinated, nobody's wearing masks, we're going to do this.... Aside from how tight and quick we had to move. It was actually pretty seamless. I would say the biggest production challenges were just the amount of dialogue and coverage, because there's so many dialogue scenes between the four characters.

Since the film comes from your won experiences, how do you like communicate those feelings to the cast so they get an idea of where you're coming from?

When I Zoomed with them or chatted with them for the first time about the script, it was just really kind of explaining the premise and d sort of talking the themes and ideas. And hopefully, if you've done your job I guess, the themes are universal and self-evident, and people find their own entry point into them. And also just explaining specifically how their characters factor into that story and what I'm ultimately trying to say. And making sure that it's something that they're going to be excited by and that they have something to chew on within the roles.

It was really just like every initial discussion that I had with Tyler (Joseph Ellis), Shannon (Sheridan), and Sahil (Kaur) was just kind of a really open conversation about friendship and what that means to us, and just bouncing around our own experiences with it. Because so many friendships kind of like come and go at this really volatile period, coming out of college into full fledged adulthood. And I think that everyone has their own take on it or their own set of experiences. And it's just really cathartic to have those conversations.

What did you learn from this film that you can take forward on your next project?

So I feel like with this one, I was more attuned to an audience's experience of what you would want a film to be, which it shouldn't be the defining principle of what you make. It shouldn't be like, "Oh, what do other people want to see?" It starts with what's honest and what's relatable and what comes from your heart. But there has to be that element of what does an audience anticipate and what will hold their attention.

VIDEO: Neal Suresh Muani gives a synopsis of his short film, Tell Me Something I Don’t Know.

The film has already screened in Boston. What kind of reaction have you received so far?

The best thing so far in the few screenings that we've had is just talking to people after and their own interpretation and experiences of friendship. And I've just had some really great conversations with people. And getting to sit in the theater and watch the film with other people is just, as you said, so rewarding. So really, really stoked about that. I've wanted to do film since I was literally a child. So I've definitely been working toward this and will continue. It's always kind of been the plan. I have the next one teed up. And so we'll see where the wind takes me.

Is directing more your passion than acting?

It hasn't been super conscious of a choice, but I feel like looking back on it, it always ends up happening where I'm like, "Oh, guess I'll play this role that I wrote for myself," just because I don't want to do the legwork of imparting the importance or the intimacy of the character, because I feel like I know it so well. And I feel like I've just been subconsciously writing roles for myself to correct that sort of retroactively. So I don't know if it'll happen again. It's kind of like a project by project basis. But I would say I'm primarily a director and that is definitely where my passion and sort of my background has led me to, and what I've trained in most specifically and formally. And then the acting is kind of just something that is tacked on top of it from time to time when the role is there and it feels right.

What do you like best about film as a forum to express ideas? Why is it such a good medium for you?

I think the reason why I've looked to film throughout my life is just to help me understand something that's happened to me or just better understand my own emotions. So, before you even get to the part where it's like, "Oh, I'm sitting in an audience. And I'm sharing it with people. And we're talking about it." There's so many layers to it. There's a completely different sensation from when I first open up my computer to start writing something, and that urge where I'm working through such raw emotions, to the time that I'm sitting in a theater watching the finished film. And I'm like, "I didn't even realize that this part of me was subconsciously sort of coming through this film." And the conversations that you have with other people once they've sort of watched and projected their own experiences onto it is like, you just continually learn so much about yourself.