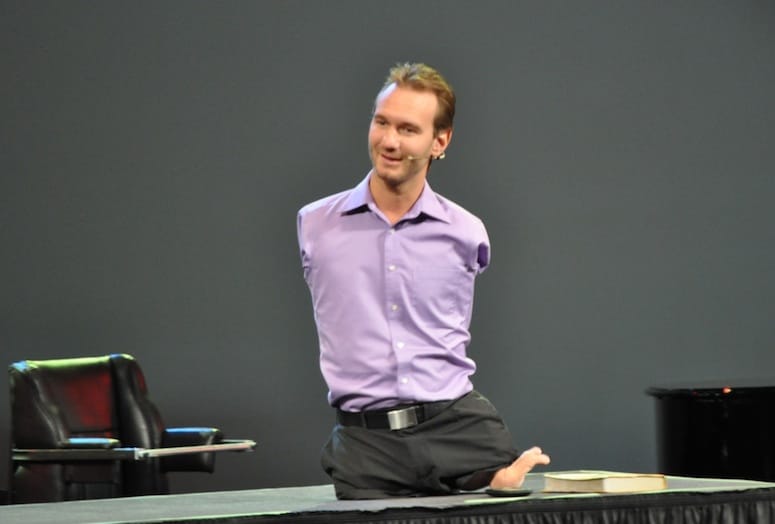 Nick Vujicic has his own definition of fear.

He spells it the same way, but each letter has a distinctive meaning.

FEAR stands for False Evidence of Appearing Real, says Vujicic, who recently spoke at Southwest Church in Indian Wells. The event benefited the Salvation Army-Davis Center, which is raising funds to build a Youth Center as part if its after school program.

“There are some good rational fears that you need to think through,” Vujicic says. “My parents were scared about not knowing of whether I would become independent, that I would go on and maybe have a family of my own.”

Vujicic was born without arms or legs, and his personal spiritual journey has brought his inspirational words before millions. He has sat with some of the richest people in the world and shared time with seven presidents and spoken before numerous congresses.

A native of Melbourne, Australia, the 31-year-old Nick and his wife, Kanae, have a baby son, Kiyoshi, and live in Los Angeles. He has been sharing his life and inspirations since he was 15, and at 17 began his own non-profit charity, Life Without Limbs.

“I didn’t need arms and legs to be happy,” Vujicic says. “I needed peace and a purpose.”

To get to that point, however, was painful and full of hurdles.

“Because I was bullied at school, I tried to think of ways to escape my pain,” Vujicic says. “Maybe ending my life could be an option. At age 8 I thought about it, at age 10 I tried to commit suicide. But I couldn’t do it.” “Sometimes we feel like we don’t have hope,” he adds. “We all need hope. We all want to be happy.”

Vujicic found his hope through God and spreads his motivational message now in more than 40 countries on five continents.

“I want to be someone’s reason to love their life,” Vujicic says.

He relates a starfish story in which a big storm a big storm washes hundreds of starfish ashore. One by one, the man begins to toss the starfish back into the water.

“A guy comes up to him and asks, ‘What are you doing?’ He says, ‘I’m making a difference.’ The guy says, ‘What? Look how many starfish there are, you’ll never make a difference’.

“He said, ‘Yeah, he picks up one, I made a difference in this one. He goes and picks up another, ‘See, this one too.’

When we come together, Vujicic says, we can make a difference but we have to be the ones who start making a difference.