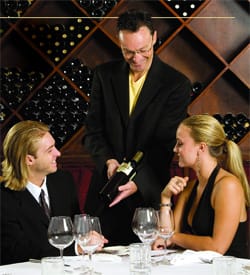 Customers who don’t blink at spending $300-plus for a PlumpJack reserve cabernet sauvignon at Cuistot in Palm Desert also don’t blink when sommelier Fred Gerber brings them a bottle with a screw cap.

“Fans of PlumpJack know that it comes with a screw cap,” he says. “There are quite a few wines on the [Cuistot] wine list that have screw caps these days.”

Since 1680 when French Benedictine monk Dom Perignon used it as a stopper for Champagne, cork has been the traditional closure for wine bottles. Then, at the turn of this century, Australian and New Zealand winemakers switched to screw caps in response to an increase in “corked” wines. (A corked wine is one that tastes musty as the result of trichloroanisole, a compound formed by a mold in the cork.) The industry consensus is that anywhere from 5 to 10 percent of cork-closed wines are affected. New Zealand wineries formed the New Zealand Screwcap Initiative in 2001 “to ensure that consumers drink our wines in the best possible conditions, exactly how the winemakers intended them to be.”

Robert Bath — a member of the Court of Master Sommeliers, wine instructor, Napa Valley resident, and importer of New Zealand wines — says 75 percent of New Zealand wines come with screw caps and that “now it’s being embraced here in America.” While he sees little resistance to the switch, particularly among the under-30 crowd that didn’t grow up during the era of cheap, screw-cap jug wines such as Mateus rosé, he notes, “There’s a handful of restaurants in the country that have adamantly said, ‘We are not going to use screw caps.’”

“I have a customer who absolutely loves The Last Ditch viognier [from Australia], but he will not buy it because it has a screw cap. Other people don’t care at all.”

In fact, Wright says, tourists visiting her store sometimes request screw-cap wines because they forgot to pack a corkscrew. She believes screw caps are fine for white wines that people tend to drink right away. However, she says, “I will never support red wines with screw caps. I don’t think it’s fair to the wine.”

No doubt the traditional and romantic French populace would applaud, particularly in Bordeaux where they lay their wines down for up to 50 years. Though screw-cap French wines are rare, P.S. Wine carries a Tortoise Creek Vin de Pays d’Oc rosé and Cuistot got its first screw-cap wines from France in September. Ironically, it is a French-based company, Pechiney Capsules, that claims the largest share of the wine screw-cap market.

Portugal, which supplies more than half of the world’s cork, champions surveys such as the 2006 U.S. wine trade survey that found 94 percent of consumers think noncork closures cheapen a bottle. APCOR, the association of Portuguese cork producers, has even developed an online certification course to increase awareness about what it sees as the benefits of cork, which include proper aging of wines.

The New Zealand Screwcap Initiative quotes Australian winemaker and author James Halliday as declaring that there is enough oxygen in wine and in the “head space” of the bottle to allow wines to age. But, since screw caps are relatively new, proof is hard to come by.

No one seems to be taking a stand for synthetic corks. Proponents of cork and screw caps say synthetic corks do not allow any aging, are difficult to open, become porous after a few years, and can impart their own off-taste.

As the number of screw-cap wines grows, there are those who lament the loss of the pomp and ceremony of a waiter pulling the cork from a bottle of wine. The Court of Master Sommeliers (the definitive word in wine-serving circles) has addressed this issue.

“The presentation of the label facing the host, a lot of that, stays exactly the same,” Bath says. “The thing we felt is the key point is that the seal is broken at the table and that, as a rule, you should explain to them why the wine was finished with a screw cap and what the benefits are.” The Court advocates pocketing the cap, which may have sharp edges, instead of placing it on the table as one would a cork.

Grasp the cap firmly and twist the bottle a quarter turn, Gerber advises. “It’s more elegant. If you unscrew with [the top of] the cap, you have to do a few turns. If you grab the neck portion, you can do it with one quick snap.

“Sometimes people are surprised how quickly the wine ends up in their glass,” he says.

“We do have quite a problem with corked wines,” Gerber continues. “I probably have maybe a handful a week, 20 to 25 bottles [out of hundreds] a month.” There may be even more tainted bottles than that, he adds, since not everyone recognizes a corked wine.

“My philosophy is that with wines you are going to consume within the first four to five years, I think screw caps are very appropriate. I don’t think you lose anything in any way. For older wines, I don’t know. The jury may be out on that for a while.”