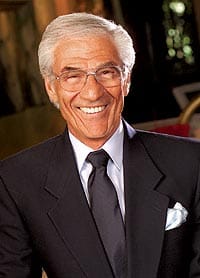 When I first came to live in Palm Springs I was very aware that I lived in the same small town that Mr. Sinatra did. Being in the saloon business, you come in contact with people who know everything going on around town. Mr. Sinatra’s comings and goings were everyday conversation.

It seemed that Mr. S moved around Palm Springs rather easily and frequented almost all the places. I had a bartender working for me who was the best friend of Mr. Sinatra’s valet and that alone made me feel important. Many of my customers had either been to his house or at parties with him.

One night someone from another restaurant called and told me that Mr. S and his party were on their way to my place. Twenty minutes later, three cars pulled up. I started to get nervous pangs but relaxed a little when I realized that I knew three people in his group. As they entered the restaurant, I greeted them as if they were long lost relatives. Of all the people I had met, I definitely was in awe of Mr. Sinatra. Much to my surprise, he positioned himself at the front end of the bar, quite accessible to everyone. But nobody bothered him. He and his entourage stayed about two hours. My place was now officially on the map.

Over the next few months, Mr. S returned five or six times — always with interesting people. Barbara Marx was always included (they were not yet married). One of Sinatra’s employees informed me confidentially that Barbara and Frank were planning to marry in four weeks at the Annenberg Estate. One thing I didn’t want to do was to antagonize Mr. S with my big mouth.

The following week Mr. S and his entourage came in and during the course of the evening the manager said Mr. Sinatra would like to see me. He was sitting in the back of the lounge by himself waiting for me to join him. As I sat down, he told me he wanted to throw a dinner party at Melvyn’s on a Saturday night. Immediately, I realized that it would be the Saturday night preceding the scheduled wedding date — the pre-wedding dinner.

The first question Mr. S asked was whether we had black or gray caviar. The way he posed the question — I had a 50-50 chance of guessing right. Before I could answer, he asked me another question about wine that I had no shot at answering. I saw it as the perfect excuse to bring my manager into the conversation to help plan this special occasion. I was amazed at Mr. S’s attention to detail. He’d even supply his own security.

Three weeks passed quickly and it was suddenly the big night. I had fortified myself with several shots of whiskey, primarily because the butterflies in my stomach were thirsty. The first people to arrive were Ambassador Walter Annenberg and his wife. Before I could open my mouth, Ambassador Annenberg extended his hand and said, “Melvyn, I’ve been looking forward to meeting you. I’ve read so much about you!” You could have knocked me over with a feather!

I didn’t hear one word about the wedding that was to take place the following day. Their party started to break up at 1 a.m. Frank and Barbara were last to leave with their friend, Jilly Rizzo.

Afterward, my manager and I congratulated each other on getting through the evening without a problem. Just then we heard a commotion and turned around to see the Rolls-Royce Frank had bought that day for Barbara stop in the middle of the driveway. Frank was screaming at two men, while Jilly was running toward them. Jilly grabbed a camera hanging around one of the men’s necks and took out the roll of film. With that, Frank told Jilly to handle it and drove off. It seems one of the two men was screaming that Frank Sinatra had tried to hit him with the car. Jilly returned to the bar with the manager and I so we could  figure out exactly what had happened.

Twenty minutes later Mr. Sinatra was on the phone asking to speak to me. He told me that he had not attempted to hit the two men with the car, but rather when they jumped out from behind a tree and took the picture, the flash temporarily blinded him and the car veered off to the side and, that if police were called, I was to tell them that was exactly what had happened.

What actually had happened was the following. The National Enquirer had sent two couples to have dinner at Melvyn’s. They were seated on the patio, which was open while the Sinatra party indulged inside. Three people who had shown up earlier were deliberately obvious so that they could be thrown out and everybody would feel safe and secure … they were only decoys. The two couples that had dinner on the patio waited the entire evening until Barbara and Frank were about to leave. Then the men positioned themselves behind a large tree that the Sinatra’s would have to drive by in order to leave. They jumped out from behind the tree, took the picture through the car window from a camera that one of the men kept in his inside jacket pocket. The camera around the neck was a phony because they knew the film would be taken from it. The camera with the actual picture was hidden back in his jacket pocket. The picture of Frank and Barbara in the car appeared in the following week’s edition of The National Enquirer. I guess they really are good at getting the story.