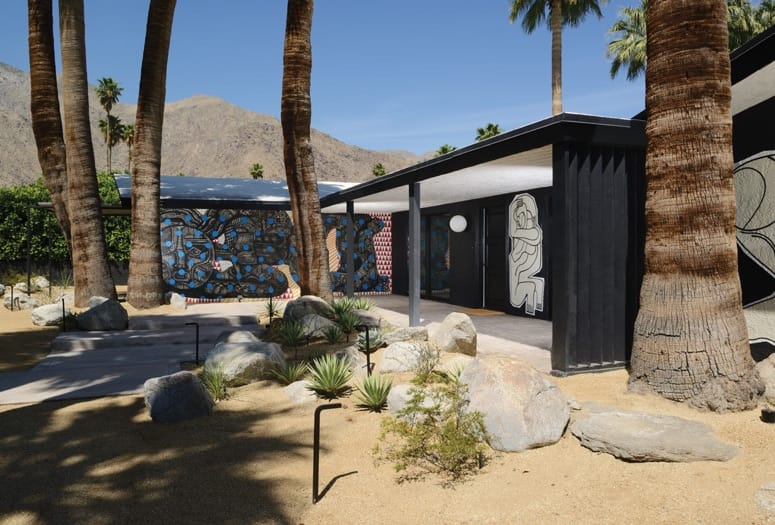 Between the enduring mountain backdrop and a rocky landscape by William Kopelk, Tod Mostero’s refreshed version of his family’s vacation home is covered in distinctive figurative murals by artist Zio Ziegler.
PHOTOGRAPHS BY DAN CHAVKIN

“Things unfold in unexpected ways,” says Tod Mostero when relating a story about how he found his landscaper, who then became his interior designer. But his observation also sums up the backstory of his Old Las Palmas hideaway, a 1955 ranch house that had been modified over the years before he renovated it and had it wrapped in a series of dramatic murals.

In 1985, after years of booking rental homes in the neighborhood for family vacations, Mostero’s father purchased the four-bedroom home with a pool shaped like a dog bone on one end. Generous in size, it could accommodate Mostero and his eight brothers and sisters, and his dad liked the familiar location.

“I remember looking at potential homes with him when I was about 15. Others had more going on from a design point of view, but this one met our needs,” Mostero explains. “It was more about the Old Las Palmas area than anything else. Dad is a very pragmatic person, and the house just made sense.”

Before he left for architecture school in New Orleans, Mostero helped furnish the home as a teenager in the ’80s and grew fonder of it in the process. “I was attached to Palm Springs growing up, and then I got attached to the house,” he says. When his dad decided to sell in 2015, Mostero snatched it up.

By that time a winemaker in Napa, Mostero had practiced architecture for only a couple of years. Thereafter he fell in love with oenology and moved to France for more than a decade. Owning the old family home would give him an opportunity to get reacquainted with its spaces while reigniting his passion for architecture and design.

The first element he envisioned for the home’s new place in his adult life was a mural at the entrance, similar to those he noticed around town as a boy. He reached out to his first choice for the job — internationally recognized painter Zio Ziegler — never imagining he would have the time or the interest to take it on. As fate would have it, Ziegler responded right away, flew down from San Francisco, and spent several hours in focused creation. Intricate patterns layered with blue dots the size of softballs soon blanketed a human form along one wall. 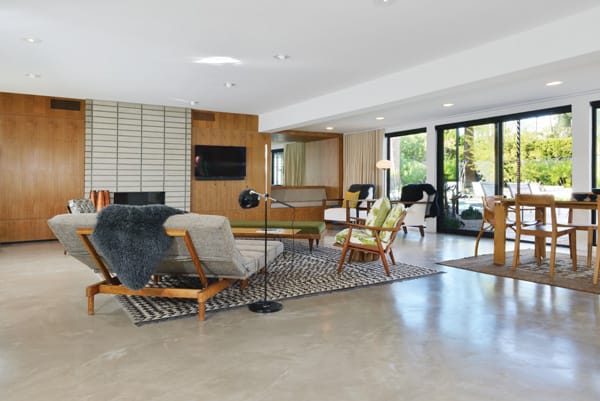 An antique kilim rug in the living room ties into the triangles on a low perimeter wall. 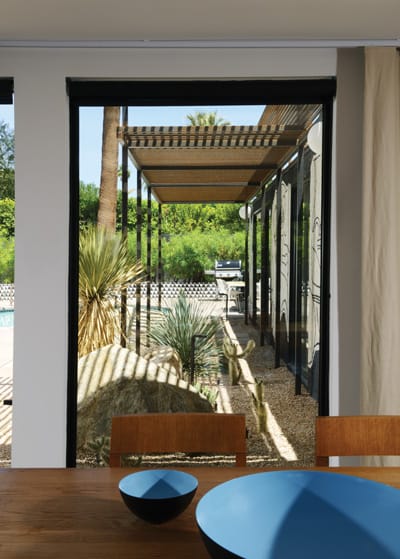 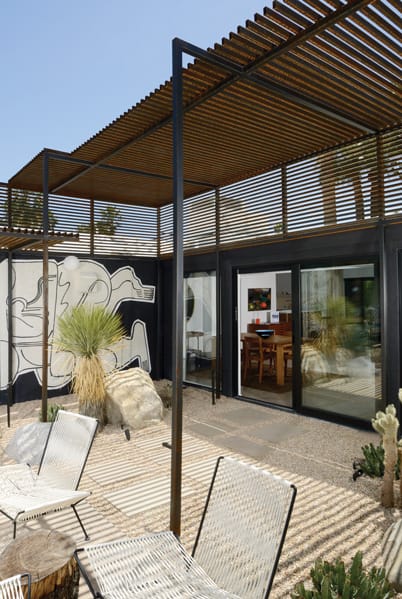 Vintage outdoor chairs from Modernway mimic the strong lines of a steel arbor by Cioffi Architect and its shadows.

“Then he came to me and said, ‘Do you mind if I continue?’” Mostero recalls. “I didn’t, so he went ahead with drawings around the entire house.” It wasn’t the method most people use to refresh an exterior, but the artist was in his zone, and Mostero didn’t plan to keep the cream hue the home was wearing anyway. “Although I don’t know that I resolved it was all going to be all black,” Mostero says. He later layered more black paint around the figures and shapes. The unusual end result moved the unassuming structure into a more modern dimension. “They look almost like they were done on parchment paper and pinned onto the walls.”

With murals popping around the pool, the home called out to Mostero for indigenous plantings and desertscape that would frame the art and jibe with the movement of the home’s lines — including the tubular steel shade awnings he had added during the remodel.

Mostero had long considered the unobtrusive landscape and hulking boulders that complement the Kaufmann House to embody his ideal. Through happenstance he met a landscaper in the neighborhood who suggested William Kopelk of InsideOutside to revamp the yard and pool areas. When Mostero looked him up, he learned that Kopelk had designed the garden of one of the iconic Kaufmann properties he had long admired. 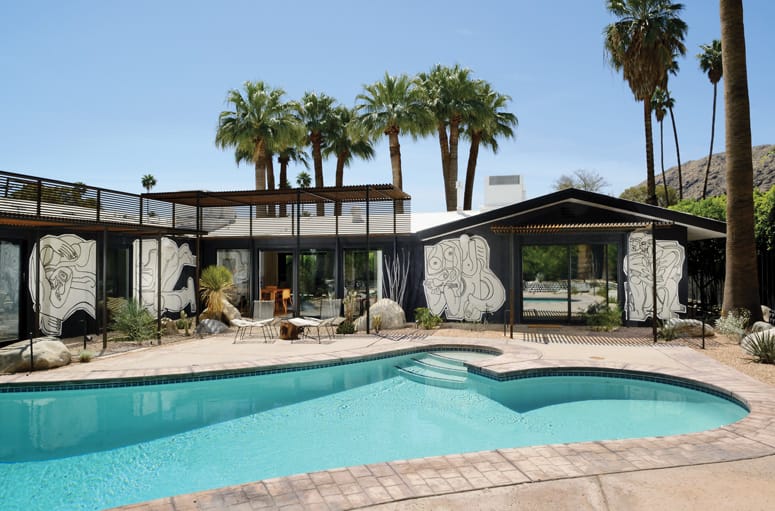 “When I moved back from France, I wanted to embrace everything about California, including its flora,” says Mostero. “I love the rockscapes William created and the views out to the pool with these big boulders in between.”

“I thought the murals were fascinating, so I wanted to follow that rawness,” Kopelk says of the landscape.
“We didn’t want anything too manicured.”

“I thought the murals were fascinating, so I wanted to follow that rawness,” Kopelk says. “We didn’t want anything too manicured.” The designer removed extraneous pool decking to expose the desert earth, craned in boulders by the dozens, and placed agaves, creosote, brittlebrush, and other desert flora with strategic finesse.

Edging the landscape and boulders so closely to the home was Kopelk’s way of fusing the understated exterior with the minimal interiors Mostero had created during the remodel. An existing hedge around the property encloses home, art, and garden in one deeply connected vignette. As the project was wrapping up, Mostero asked Kopelk, who specializes both in landscape and interior design, if he would carry his vision inside and connect the dots between the two spaces. Kopelk enlisted colleague Maureen Erbe to assist. “She is on the Modernism Week board with me and is a successful Realtor; she also has a wonderful level of taste and design,” he says. 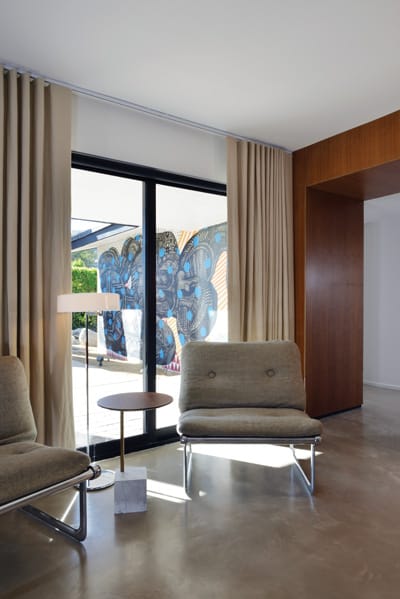 Knoll International Lounge Chairs (1970) pair up in front of a custom walnut panel by Shopworks.

The three immediately tapped into a harmony that played off each other’s ideas. From there the search was on, collecting pieces at Modernway, Flow Modern, and local consignment stores that would relate to an assortment of new European furniture Mostero was shipping over on a crate from France. “We even added things from Tod’s youth and a few things that are sort of tongue-in-cheek,” Kopelk says. “It’s a diverse mixture of objects, so everywhere you look is unique. He’s a sophisticated guy with international tastes, and that was part of the design solution.”

For Mostero, the key to that solution was that it didn’t feel designed, as if someone had come in and calculated every square foot of it. “It’s more of a collection. I wanted people to feel at ease and inspired,” he says. “We all had the same vision, and there was a lot of trust. I don’t think there was anything I said no to, and William was great about incorporating the things I had brought from elsewhere and picked up along the way.” 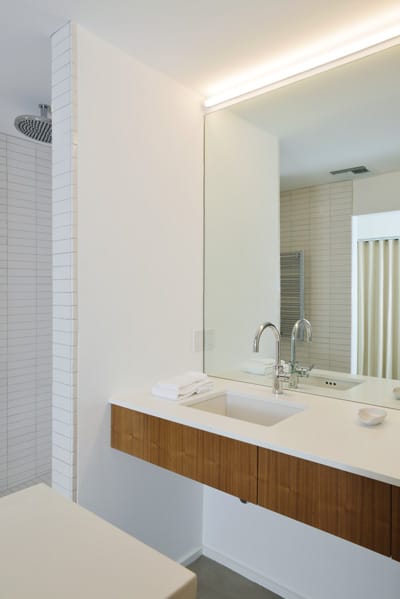 For Mostero, the key was that it didn’t feel designed,
as if someone had come in
and calculated every square foot of it.

While Mostero remains consumed with making wine up north, his reimagined vacation retreat has had no shortage of rental requests. The home Mostero’s father purchased so the family would no longer have to rent a vacation pad has ironically emerged more than 30 years later as a sought-after rental property. Things do unfold in unexpected ways.

“As a child, my family rented a house once a year in Palm Springs, and it was such a powerful memory for me, almost otherworldly,” he recalls. “As I was working on the house, I kept imagining what it would be like for someone to spend time there building their own memories. So making it available is allowing someone else to experience the area I grew up knowing as a child.”

When Mostero sits in what was once his family’s living room looking past the big, beautiful boulders and out to the pool, what may have felt like a roundabout maze along the way seems to have come back around in a perfectly meaningful circle. 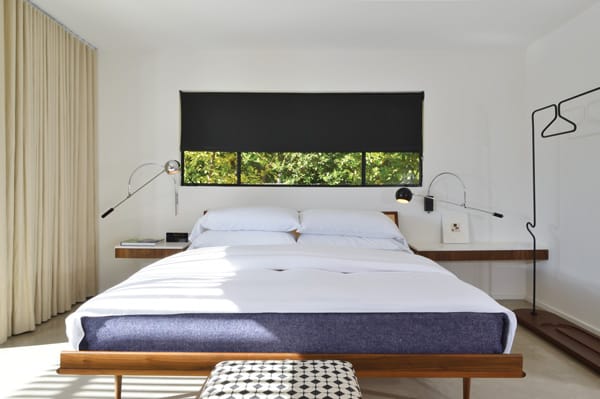 A valet hanger by Kann Design and Sonneman Orbiter Lamps make a sculptural
contrast to the Nelson Thin Edge Bed.