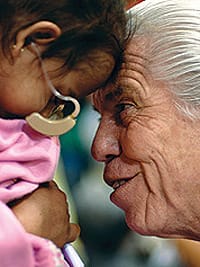 Fear registered in Nataly Benavidez’s big brown eyes. For the second time in two years, the 8-year-old girl was about to undergo surgery at the hands of U.S. doctors and nurses who had traveled to Ecuador on a medical mission organized by Rancho Mirage-based International Medical Alliance.

Looking at Nataly’s face, you’d never know that two years ago she suffered burns over nearly half of her body, scarring her arms, stomach, and legs. The accident crushed her self-esteem, and she became depressed and reclusive.

IMA’s volunteers changed Nataly’s outlook and gave her hope through skin grafting. She was frightened, but also was excited about the operation that would bring her a step closer to being a normal kid again.

I met Nataly in June while working as a translator during IMA’s 10-day mission to the 9,000-foot Andean mountain city of Latacunga, Ecuador. I saw how doctors and nurses from the Coachella Valley and across the nation are changing the lives of deformed and chronically ill people who could never afford this care.

“It is always a very humbling experience to work on these children and even the older patients,” says Dr. Peter Scheer, an oral and maxillofacial surgeon from The Mirage Center in Rancho Mirage.

Robert Openshaw, a San Bernardino-based orthopedist, helped transform the lives of 29 legless men, women, and children by giving them the ability to stand upright and walk again with prosthetic limbs.

“This is a blessing from God,” Anita Tello cried out after Openshaw fitted her husband, Darwin Bolaños, with used prosthetic legs that Openshaw had reworked to fit him. Bolaños, a 36-year-old chauffeur, lost his legs from the knee down in a traffic accident last year that caused suffering for his whole family, including a 10-year-old daughter and 6-year-old son.

“To see him go from being healthy and fine one day to missing both legs the next was very hard,” Tello said. “It was very hard on our children, too. At first, they were just happy to see him alive. But after that, it was very hard on them. I had problems with my son in particular. It was very hard for him to accept the fact that he may not be able to play soccer and other games with his dad like the other kids could do with their dads.

“My children’s biggest dream is that their father come home today with both legs,” Tello said, her eyes glassy with tears, adding, “It looks like their dream is going to come true.”

Bolaños said losing his legs had a bigger psychological impact on his children than it did on him, although the economic ramifications devastated the whole family. “We’ve been depending on my wife’s income, and it’s not enough to support us,” Bolaños said. “I’m looking forward to being able to help support my family again and to be able to help my wife around the house.”

Linda Jewell, U.S. ambassador to Ecuador, was moved to tears when she visited IMA volunteers and saw the work they were doing, which was heavily publicized by the Ecuadorian news media.

Walking with IMA founder Ines Allen through Latacunga’s Patronato Hospital, one of two hospitals where the Coachella Valley volunteers were based, Jewell saw hundreds of Ecuadorians from virtually every corner of the country who had come to Latacunga with the hope of receiving free medical treatment. Many of them had been standing outside the hospital for days, bundled in jackets and sweaters to protect them from the cold, damp weather.

The volunteers often worked until 9 p.m. and sometimes past midnight each day in an effort to see as many patients as they possibly could.

“There is so much need, and there is so much we can do to help,” says Allen, a Rancho Mirage resident who founded IMA after spending 15 years volunteering her services as a translator and dental assistant for other humanitarian organizations.

While IMA has focused its attention on Ecuador, one of South America’s poorest countries, Allen hopes to eventually broaden the organization’s mission to include other countries in Latin America and around the world.

The hardest parts of the mission were the time constraints and breaking the news to some patients that they would have to come back when IMA volunteers returned to Ecuador next year. By the time the volunteers left Latacunga, Openshaw had lined up 30 patients for next year who need everything from artificial feet to prosthetic arms and hands.

Doing a World of Good

While the International Medical Alliance was providing medical services in Ecuador in June, Riverside County volunteers affiliated with Rotary International were performing surgeries in Venezuela.

“Each of the 105 surgeries we performed had a story,” Levinson says. “We did a surgery on a boy with six fingers on each hand. We also had a girl of 13 or 14. She had pierced her ears and got an infection and had growths in both ears the size of donuts. Our surgeons removed the growths and reshaped her ears. It was another life completely changed.”

Levinson, who had worked as a Rotary volunteer on humanitarian missions to Honduras and India, was taken aback by the severity of the birth defects and infections that he encountered in Venezuelan children. “Some of these kids went around with bags over their heads because other kids would throw rocks at them,” he says.

Bill Austin, a part-time Rancho Mirage resident who founded the Starkey Hearing Foundation, has fitted more than a quarter of a million people with free hearing aids since 2000.

While he serves as CEO of Starkey Laboratories Inc., one of the world’s leading hearing aid manufacturers, Austin criss-crosses the globe on humanitarian missions. “We are trying to help people all over the world to be part of life,” Austin says, adding that it’s difficult to develop speech, communicate with friends and family, and function in society without the ability to hear. “We’ve seen a lot of tears of joy from mothers and fathers and grandparents as they connect with each other and hear the way they need to.”

Pat and Joe Manhart of Advanced Hearing Systems in Rancho Mirage, still talk about a boy they fitted with a hearing aid during a mission to El Salvador several years ago. “He was failing in school because he couldn’t hear,” Joe recalls. “But when we saw him five years later, he was … a straight A student and was planning to go to college.”

Local hospitals have several doctors who volunteer in other international outreach efforts to train foreign doctors and provide medical services.

Dr. Khoi M. Le, an interventional cardiologist at Eisenhower Medical Center’s Desert Cardiology Center, has made five trips to Vietnam teaching and guiding colleagues in performing angioplasty in his native country. He continues to visit Vietnam each year and twice has been accompanied by Drs. Charlie Shaeffer and Barry Hackshaw of the Desert Cardiology Center.

Another Eisenhower doctor, Dr. Raul Ruiz, plans to volunteer as an emergency room doctor at a clinic in Chiapas, Mexico, this winter. A Harvard-educated doctor who specializes in international emergency medicine, Ruiz helped El Salvador and Serbia update their national emergency response systems as part of his fellowship work overseas.

Dell’Acqua and others, however, recog-nize the importance of volunteering their time and talents in the Coachella Valley in addition to helping overseas.

Dell’Acqua provides free dental services to children of families who cannot afford medical care, while Dr. Peter Scheer, an oral and maxillofacial surgeon with The Mirage Center in Rancho Mirage, addresses special needs cases for maxillofacial surgery in both children and adults.

Austin and the Manharts will give hearing aids to needy Coachella Valley children during the Frank Sinatra Celebrity Invitational in February.

Bill Chase is a Cathedral City dentist who previously served as dental director for the Smile Factory Foundation, a mobile dental clinic that provides free dentistry to Coachella Valley children in coordination with local school districts. He has made more than a dozen trips to Santarem, Brazil, where he has provided dental services. The locals have been so impressed by his work that they named a clinic after him.
— J.C.