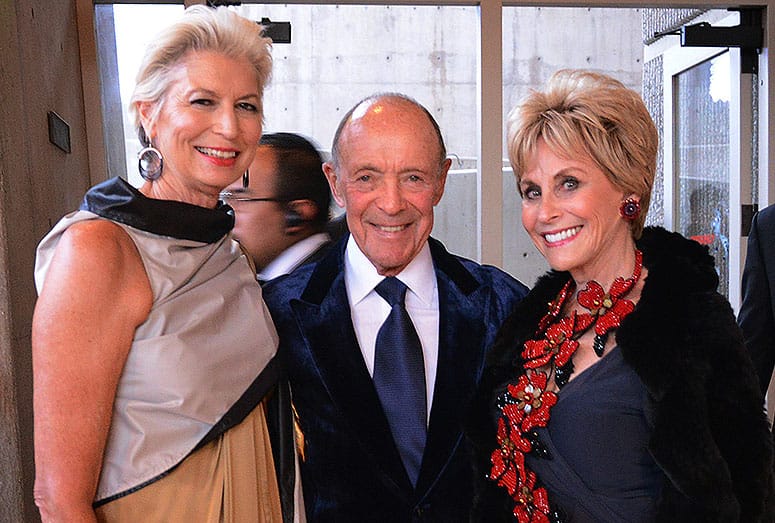 The Palm Springs Art Museum presented a magnificent gala titled "Once Upon a Time in the Land of Art." Invitations were in the form of childhood fairy tale books and the event brought all of the magical dreams of castles, princesses, fairies and fantasy to life. Over 350 guests, who walked the pale blue carpet into the Sculpture Garden, were fascinated as it transformed into a veritable fairyland.

Guests were greeted by Board of Trustees Chair Donna MacMillan in a Swarovski crystal encrusted tulle dress and MAC President Carol Fragan in a white beaded formal sheath.

The cocktail reception was filled with elegant guests who were offered champagne from a sparkling princess who toted over 100 glasses of champagne on her hoop skirt. Violinists appeared to be floating on the two reflective pools inside the garden and guests were surrounded by a mystical atmosphere created by rising fog.

The second part of the evening began inside the Annenberg Theater as Museum Director, Liz Armstrong, seemed to defy gravity as she appeared onstage with a crown of white flowers and angel wings. This lighthearted moment was shared with Donna MacMillan, as both women vied for the title of Fairy Queen and welcomed everyone to this magical evening.

Chief Curator Katherine Plake Hough, who has served as curator for almost 40 years, received the surprise honor of the evening; a Jacques Lipchitz sculpture was donated by Museum supporter Gwen Weiner in honor of Katherine’s dedication to the Museum.

British baritone John Barrowman provided entertainment and the uniquely talented and versatile Well-Strung quartet played music from all genres. Broadway and London stage singer Sally Ann Triplett brought the house down during a duet with Barrowman.

Elegantly masked princesses in white gowns welcomed guests to dinner in the Main Gallery. Each table was set in a different fairy tale theme with sequins, lace, tiaras, crystals, silver hearts, or white flowers that seemed to have been created from any version of Cinderella's favorite ball gowns. An elegant 3-course dinner was served by Savoury's Catering that included two desserts garnished with a sugar crystal slipper decorated with rosebuds.

The pale blue satin draped after-party room was a subtle allusion to the movie Frozen as guests danced in the magical ballroom. And, as the clock seemed to be nearing midnight, guests headed down the main staircase of the Museum where they had a modern day "photo op" for a chance to have their pictures taken in front of a twinkly-lit Cinderella-style coach with white horses.

When the fairy tale ended, the Museum announced that they had raised more than $760,000 to support the Palm Springs Art Museum.