Opera Star Will Show Her Inspirational Biopic to Valley Audiences 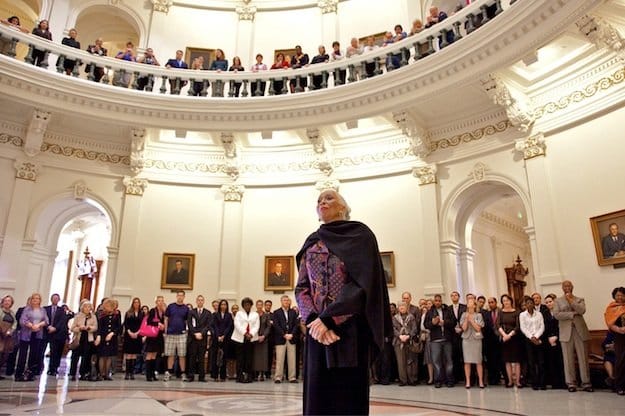 It was her 10th birthday.

Barbara Smith Conrad was in a celebratory mood and thought an ice cream sundae would be a perfect present to herself.

But in 1945, a 10-year-old black girl in rural east Texas couldn’t simply walk into an ice cream shop and order.

“They wouldn’t serve me,” Barbara said.

Nine years later as a student at the University of Texas, Barbara would find herself in a situation with much graver consequences that would escalate into a matter of life and death. In the fall of 1956, the 19-year-old Barbara transferred to Texas from Prairie View A&M University as part of the first racially integrated undergraduate class.

Her undeniable musical talent quickly catapulted the young opera star into being cast as the romantic lead in the college’s rendition of Dido and Aeneas opposite a white male student. Cries of outrage from segregationist groups forced the topic public to the Texas legislature. Just days before the opera was slated to open in May 1957, university officials expelled Barbara from the cast and replaced her with a white student.

It would have been easy for Barbara to simply leave. Her plight had even attracted actor Harry Belafonte to call and offer to pay her way to any college in the country.

“I knew then that I didn’t want to run away from something that was my birthright,” Barbara recalled. “These are the kinds of things we were taught as children.”

Barbara would eventually move to New York to become an internationally renowned mezzano soprano, singing with the Metropolitan Opera of New York for eight years.

Barbara’s amazing resiliency, perseverance and ultimately healing process has been captured in a riveting documentary, “When I Rise”, which will be shown twice during a three-day event, Feb. 8-10, by OperaArts in Palm Springs (see the movie trailer).

The first screening will be held Feb. 8 before 500 underprivileged students at Cathedral City High School. The movie will be shown to the general public at 6 p.m. Feb. 9 in the Sanctuary of Temple Isaiah, 332 W. Alejo, in Palm Springs. Barbara will be on hand for a Q&A session after the screening. A $10 donation is encouraged.

The gala event will be held at 6:30 p.m. Feb. 10 featuring special presentations to Barbara and a musical program that could include her performing at the Renaissance Esmeralda Resort & Spa, 440400 Indian Wells Lane, in Indian Wells. Tickets are $125 each.

Palmspringslife.com spoke to Barbara from her New York condo about the upcoming weekend, the movie and its impact on her life.

What was it about the OperaArts event that made you want to be a part of it?
“It starts with the film. The next thing I know, this is what is happening. Nancy (Sorin) Collyer is a dear friend of many years from New York. Some years ago she bought a home and moved out to your neck of the woods. She wanted to see something happen. I’m very excited about coming.”

Does that surprise you to see people go to such lengths to have your story shared with others?
“Over the last 2 to 3 years, I’ve gotten so much correspondence from so many people. I’m glad to know that something that happened in my early life, something that I attempted to do, has turned out to be something good. That means a lot to me considering that a person in this time of my life, I’m still able to do something worthwhile.”

How did the movie come about? Did someone come to you?
“A very gifted young man from my neck of the woods in Texas. (Director) Mat Hames. He came while I was home in Pittsburgh, Texas. We talked. That’s where it started. I liked him. He liked me. We understood each other. It was something I was willing to take a risk a little bit because I had never really done any real film work before. It turned out to be something extraordinaire. It’s something that has turned out to be very useful. At the very least it’s helped people to recognize what things were like, what they could be and how they can get better.”

How much input did you have on the film’s direction?
“Some very gifted people did most of the work. I was the person who said, ‘Yes, I did that. No, I didn’t do that’. But I was touched by it. It wasn’t something I had never planned to do. I have been asked quite a number of times to do a film, but these people touched my heart, and I had a sense that something good could happen. I don’t know anything about making films. They certainly did. They knew how to reach my heart, and what all of that meant. Those were some pretty rough years. I wasn’t that thrilled about talking about them, but they needed to be talked about.

The movie recounts you meeting actor Harry Belafonte. That must have been pretty surreal to get a call from him out of the blue?
“It was surreal. My housemother had driven 360 miles because it was getting scary – people were threatening all kind of things against my life. Belafonte had called my parents home, and he wanted to know what I wanted to do. I told him I would call him because I needed to talk to my parents. I was not about to run away.”

Prior to the incident at the University of Texas, had you faced racial discrimination on campus?
“That’s all I knew. Or what I was prepared to face. There was a lot of ugliness that whole period. Nobody was being particularly friendly back then. Nobody talked to anybody. We didn’t live in dormitories together. We didn’t do anything together. We eventually went to school together, and thank God, made very good friends over time. But it was the kind of thing that in one way you’re proud of it because you managed to live through it.”

Do you have any regrets over the decisions you made?
“I don’t. Anger once in awhile will burst through. But it’s a long time ago, been a lot of forgiving and a lot of wonderful, wonderful people in my life. I just want more than anything else for our children, whatever color they happen to be, to do something with their lives. I’m not anybody to say you should do this or do that. I knew music was where I belonged.”

What would you want an audience of kids to take away from the film?
“I really don’t know the answer. I can only guess at it. I want them to know that everything is possible. That doesn’t mean it’s going to be easy to do. Doesn’t mean somebody is going to hand it to them. Doesn’t mean they will have someone like a Belafonte in their life. But I think the lesson to be learned is you keep dreaming and hoping someone will think I’m special, too. It’s a myriad of thing. A lot has to do with the people who are there, the teachers who encourage them to dream those dreams and the person at home who supports those dreams. You just can’t think it will happen.”