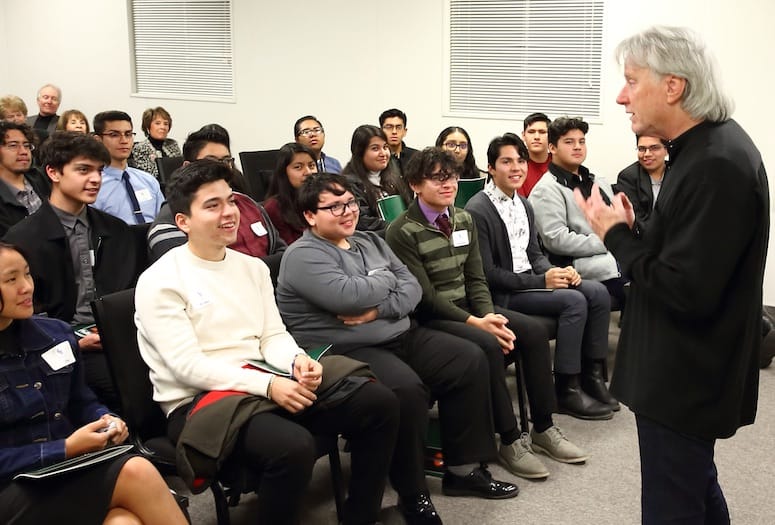 The Pacific Symphony returned to the Coachella Valley to perform their eighth concert for the Palm Springs Friends of Philharmonic at McCallum Theatre, receiving a standing ovation from the sold-out crowd of music lovers in attendance. Under the direction of Music Director Carl St. Clair, who this season celebrates his 30th anniversary with the Pacific Symphony, the evening’s program featured Maurice Ravel’s Le Tombeau de Couperin, Maurice Ravel’s Piano Concerto in G Major, performed brilliantly by pianist Alain Lefevre, followed by Hector Berlioz’s Symphonie Fantastique.

This evening was special for 40 members of the Cathedral City High School band, who were in the audience to experience the concert, having received complimentary tickets.

Immediately following the concert, there was a special “Meet & Greet” with St. Clair and these aspiring young musicians. St. Clair shared his insights about the evening’s performance, his own musical journey from high school to the concert stage, followed by a Q & A with the students.

This post-concert “Meet & Greet” was made possible by a three-way partnership between the Palm Springs Friends of Philharmonic, McCallum Theatre’s Education Division, and the Pacific Symphony.

“It was really fantastic meeting the students just after they had experienced our concert,” said St. Clair. “The memories and impressions were fresh in their minds, and they had so many insightful and thoughtful questions. They were so excited, and so was I, to exchange our feelings. They were very bright students, and I look forward to meeting them again to continue our relationship.”

Pacific Symphony, led by St. Clair for the last 30 years, has been the resident orchestra of the Renee and Henry Segerstrom Concert Hall for over a decade. Currently, in its 41st season, the Pacific Symphony is the largest orchestra formed in the U.S. in the last 50 years, and is recognized as an outstanding ensemble making strides on both the national and international scene, as well as in its own Orange County community. Two years ago, the Pacific Symphony made its debut at Carnegie Hall, as one of two orchestras invited to perform during a year-long celebration of composer Phillip Glass’s 80th birthday, and the following month the orchestra toured China.

For information on the Palm Springs Friends of Philharmonic, call 760-341-1013 or visit psfp.org.