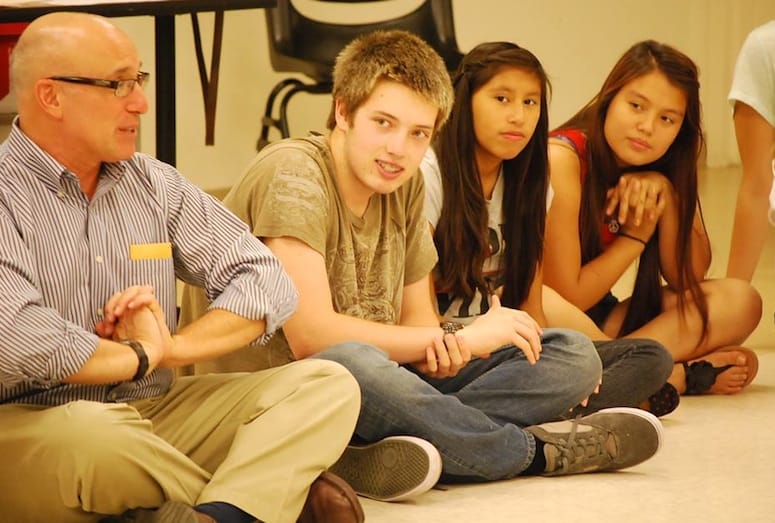 David Cantanzarite and Karen Lin met while teaching and mentoring at the Los Angeles Arts Prototype Program in the late 1990s.

The husband and wife team have continued to play important roles in promoting the arts after moving to the Coachella Valley five years ago and creating the Palm Desert Theater Academy in 2010.

“As parents, we realized there was not a lot of things for kids to do here in the desert,” says Karen, managing director, on founding the school for children, ages 9-12. “We employed a terrific group of advanced theater students from the College of the Desert and received phenomenal support from former COD President David George.”

Karen (pictured at right with Shauna Holmes) has directed many plays since founding the Academy, including last summer’s “You’re a Good Man Charlie Brown”. She’s been a media designer at the College of the Desert, an art director for the Watts Village Theater in Los Angeles and acted in many plays including “The King and I”, “South Pacific”, and “Mame”.

David was formerly a director at the College of the Desert, has received four Desert Star nominations and served full-time on the theater faculty at Pomona College and as an adjunct professor at UCLA, USC and Stanford.

But his theatrical connection dates back to his youth.

“My theatrical career began in the fourth grade,” says David, “when I played the role of a refrigerator repair man in ‘Mr. Popper’s Penguins’. At the last minute I played it with an Italian accent and it made the audience laugh. I could feel them right there with me, and realized I would do whatever I took to make it happen again.”

“I got some wonderful breaks at the Mark Taper Forum in Los Angeles and as associate director at the Shakespeare Festival LA,” he adds. “The theatrical highlight of my career was as a visiting director in the Black Townships surrounding Cape Town, South Africa, and meeting with Nelson Mandela in the first year of his Presidency”.

The Academy has become a reflection of Karen and David’s multi-cultural experiences, expanding to add the non-profit Green Room Theater to provide a broader theatrical production outlet for those attending the Academy. “We are dedicated to a multicultural and multilingual approach to theater,” says David, artistic director of the Green Room Theater. “We would like to fill the need for professional quality drama in the East Valley. We want to create theater with, among others, the abundant Latino and African American talent there which is untapped.”

To that end, in December, the Academy presented the “Gift of the Magi” (pictured at left) featuring an all-black cast with the play set in Harlem in 1903.

“My greatest reward is knowing we can make a change in someone’s life,” says Karen. “We’re going to continue to teach and focus on young people in the Coachella Valley, and to promote diversity and opportunity for aspiring young actors as well as adult beginners.”

Auditions are currently underway for the production of “13”, a collaboration with Palm Desert Middle School and John Glenn Middle School to be performed on the campus of CSUSB Palm Desert. Students between grades 6 to 12 are encouraged to try out.

“We’ll be getting the best young voices and dancers in the desert," says Lin, noting “Fiddler on the Roof” will run this summer plus some smaller vignettes for younger students.