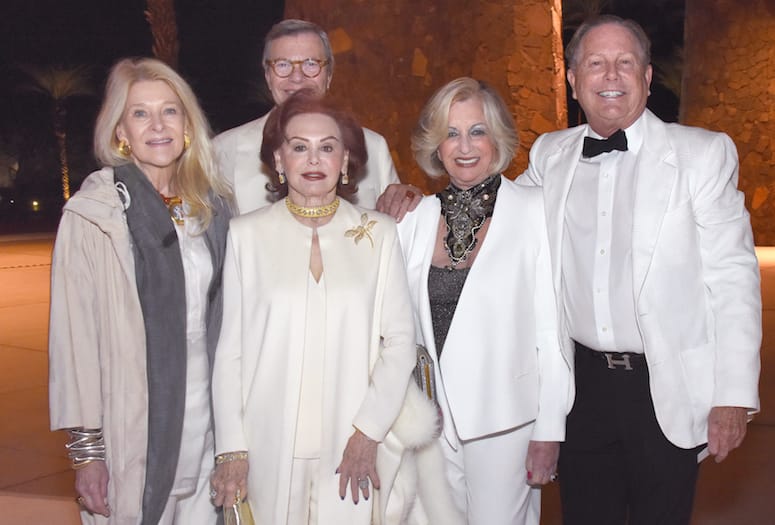 The Palm Springs Art Museum has always found a way to make their gala art centric as well as elegant and memorable. Their 80th Anniversary Gala, co-chaired by Barbara Keller and Ann Sheffer, took on the theme of “The Art is You.”

The all-white dress code succeeded in making the guests the canvas as well as the art. More than 400 supporters walked a white carpet to join a reception with a photo booth that imposed images from the museum’s collections on their “personal” canvasses. Guests crowded the bars for liquid reinforcements and to watch performances by Flair Bartenders.

The ballroom of the Palm Springs Convention Center emulated the white theme with elegant table settings, a shiny white dance floor, and a stage with a large curved screen that featured honored trustees who have contributed $5 million dollars or more in gifts of cash and art, hours of service, and leadership to the museum. Honorees were Leonore and Ambassador Walter Annenberg, Steve Chase, Helene and Lou Galen, David Kaplan and Glenn Ostergaard, Donna and Cargill MacMillan, Harold Matzner, Dorothy and Harold Meyerman, George Montgomery, Sam and Gladys Rubenstein, Faye and Herman Sarkowsky, and Gwendolyn Weiner representing the Ted Weiner Family.

Weiner also served as the 80th Anniversary Chair and announced that the Henry Moore bronze sculpture Woman would be her family’s gift to the Museum’s permanent collection in honor of their 80th Anniversary.

Guests were entertained during dinner by Johnny Manuel, an America’s Got Talent finalist. After being served two very special desserts that were museum-quality works of art, guests finished off the evening on a beautifully lit white dance floor.