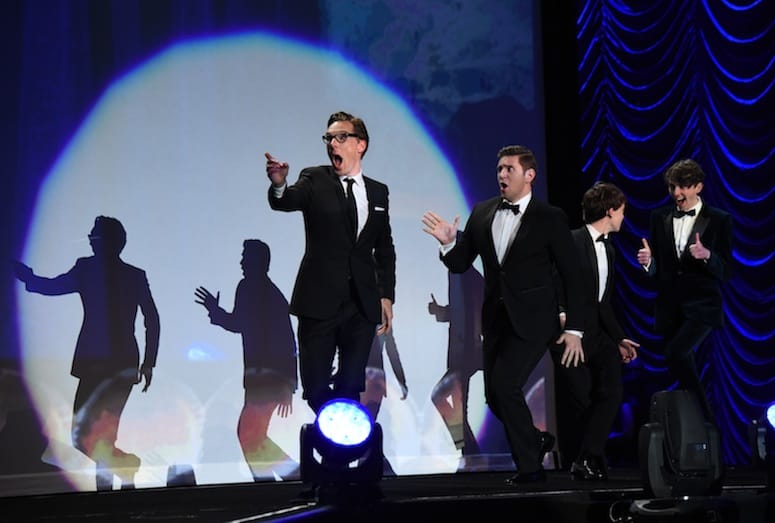 So the mega movie star took time during his presenting speech to teach the Palm Springs International Awards Gala audience how to pronounce Oyelowo's name on Jan. 3 at the Palm Springs Convention Center. Pitt is a producer of the film Selma, which stars Oyelowo as Martin Luther King, Jr. in a biopic of the famous civil rights march in the early 1960s. The film opened the film festival Jan. 2.

Oyelowo's performance was recognized with the festival's Breakthrough Performance Actor Award. A similar honor was given to actress Rosamund Pike for Gone Girl.

"I know there is a one fundamental question in the back of your minds that we air out tonight. How in the hell do you pronounce his name," Pitt says. "It's OK. Been there. And I'm here to help."

While the audience may not have grasped the pronunciation sing along as much as Pitt would have liked, he did make sure they understood the impact Oyelowo's acting will have on the industry for years to come.

"A man's name who one day will be synonymous with (Sydney) Poitier and (Sir Laurence) Olivier," he said.

In return, Oyelowo responded, "You know you're breaking through when Brad Pitt sings your name. Wow, that was incredible."

Presenters and award recipients made the most of the awards gala format, which is unencumbered by a TV schedule and thus allows for longer introductions and speeches than what TV viewers see at the Golden Globes and Academy Awards.

Among the last to be honored with the Ensemble Performance Award was the representative cast on The Imitation Game led by the film's star, Benedict Cumberbatch, who plays Alan Turing in a true story of how one man cracked the German's secret code during World War II.

Cumberbatch led cast members Allen Leech, Allen Lawther, and Matthew Beard with a slow-motion jaunt as they came on stage to the audience's delight. Cumberbatch then joked that Kiera Knightly, who plays the lead female character in the film, got mixed up in what 'Palm' city she was supposed to come to.

"Keira thought this was taking place in Palm Beach," Cumberbatch said. "So she couldn't be here. She's having a wonderful time."

Cumberbatch did most of the talking, but for a closing, each member took a turn saying a word as they circled the microphone.