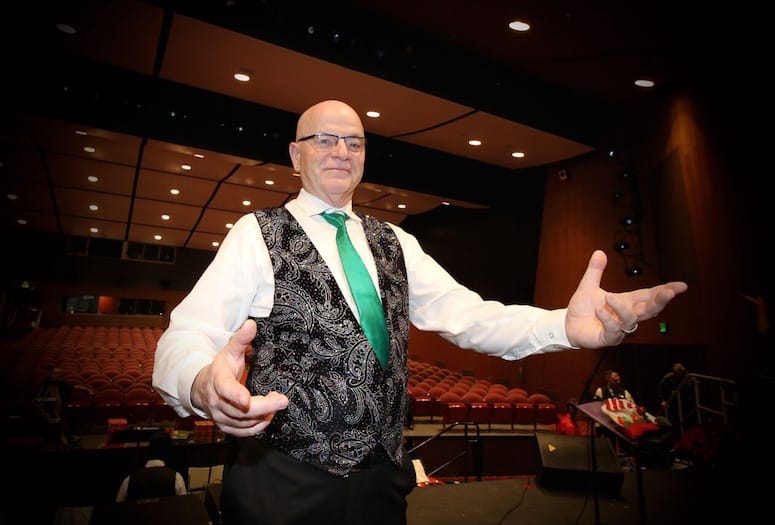 With its upcoming holiday concert, dubbed “Men in Tights—A Holiday Spectacular,” the Palm Springs Gay Men’s Chorus (PSGMC) hopes to unite the past with a thoroughly modern present.

Artistic Director Douglas C. Wilson says that while planning this year’s holiday bonanza, running Dec. 14-16 at the Annenberg Theater, he wanted to unite two unique time periods for an outing that would be both regal and fun.

“My first idea of the show was to put two time periods together,” Wilson explains. “I had some Renaissance-style music and I wanted to include other fun songs that we could work into that first half. We will have somebody playing a king, and he will be tying the show together—barking out orders of what music he wants to hear or what dancers to see.”

The chorus has grown to 110 members.

To that end, expect the show’s first act to head back to the Renaissance when knights were bold. Christmas in the Cloisters, Boar’s Head Carol, Sing We Now of Christmas, and Gloucestershire Wassail — music from the time of Camelot — filter into that eclectic mix. Wilson feels it will evoke a sense of being with the king and his court during the holidays.

After intermission, things get thoroughly modern with creative twists in the musical repertoire. There’s A Long Christmas Dinner, and festive romps with Ring-A Ling-A Disco and Stomp The Halls.

“We’re also doing a short oratorio that’s about two gay men who are going to one of their family’s house for the first time for dinner—together,” Wilson says of one of the second act’s more prominent offerings.

“People get the feeling that we are role models; that we want people to see, especially young people and that you can have a successful, safe, happy life as a gay man or lesbian women. Being up there in front of people, we hope that that’s what we portray.”Douglas C. Wilson, artistic director

A country-western version of the song Dreydl, Dreydl promises to deliver something new and inventive as will the choral premiere of Christmas In Palm Springs, arranged for the chorus by accompanist, Joel Baker.

These imaginative elements are all part of the chorus’ vibrant 20th season, something Wilson hopes will build a chorus like no other.

More than 15 new members were added after PSGMC’s last audition process, bringing the total of singing members to 110. And next year, other milestones come forth — 2019 marks the 50th Anniversary of The Stonewall Uprising and PSGMC joins 20 other choruses in America to commemorate one of the most pivotal points in the LGBT movement. Along with other gay men’s choruses, it will commission a major choral work, which will chronicle “the story of the men and women who banded together for a common cause.”

When asked about some of the more challenging aspects of being at the helm — and, really, in front of everybody as conductor — Wilson, who’s going on his fifth season with PSGMC, says that people may not realize the group memorizes all of the music it performs.

“So, in terms of planning a concert, you have to figure out not just how much of this music can we learn, note-wise, and be able to sing,” he says. “We have to allow time to get all of that music memorized. You have to think of all that when you are looking at the music.”

And the intrigue about gay men’s choruses over the last four decades?

“For singers, the allure is being together with other gay men,” Wilson is quick to point out. “Sometimes, there’s not much opportunity to get together in that friendly way. That was one of the draws for the choruses when they first started—that they were a place where gays and lesbians could go. They could have a social life and it was going to be safe place.

“Now, the allure has shifted a bit,” he adds. “People get the feeling that we are role models; that we want people to see, especially young people and that you can have a successful, safe, happy life as a gay man or lesbian women. Being up there in front of people, we hope that that’s what we portray.”