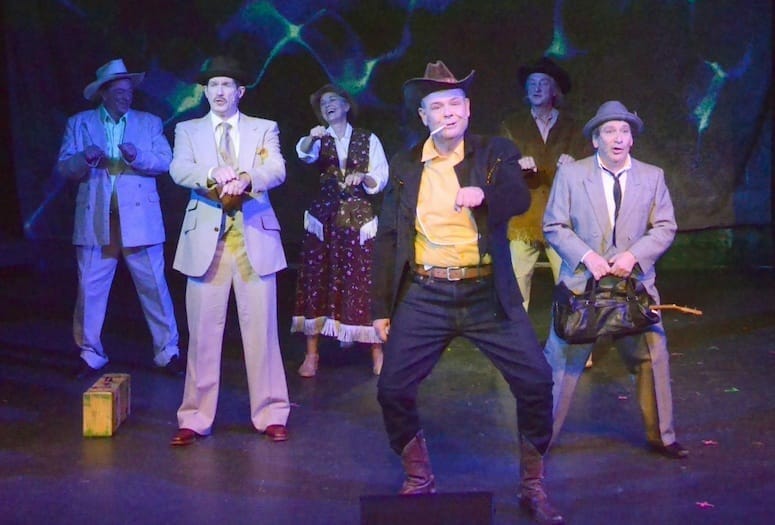 Eric Stein-Steele (center), who co-wrote the script for Palm Springs Getaway, portrays Johnny Boyle  in this scene as a troupe is on a breakfast ride in the Indian Canyons.
PHOTOGRAPHY BY PAUL HAYASHI

What a great idea!

That’s what Cara Van Dijk told Se Layne about creating a musical play dedicated to telling the history of Palm Springs through song, dance, and well, laughs. Layne, whose family has run the Palm Canyon Theatre since taking its reins in 1997, was chatting about how other visitor destinations like Branson, Missouri, and Las Vegas had turned their history into a stage show.

Never in a million years did Van Dijk, then the publicist for the theater, ever think she would be the one writing the musical.

“I might help publicize it, but I didn't think about writing it at all,” Van Dijk says. “And part of the reason was because Se was in fact doing some of the initial research on her own about what she would want to include in the play. And then she was starting to work with a writer.” 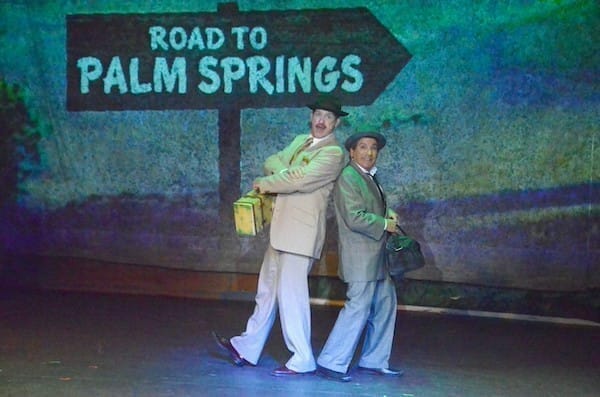 When the writer dropped out of the picture, Layne voiced her disappointment over the project hitting a wall. In the next breath, she asked Van Dijk if she would consider stepping in.

“And I had said, ‘uh….’ And honestly, I started crying. I started crying because it was actually at a time where I was really looking for a creative outlet,” Van Dijk says.

Starting Dec. 2 and set to run through Dec. 18 and again in late January (Jan. 20-29), Palm Springs Getaway will take audience members on a journey through the city’s history at Palm Canyon Theatre. In her conversation with Palm Springs Life, Van Dijk shares the rollercoaster ride of putting a script together, staging a sneak preview earlier this year, and what this adventure has meant to her.

Had you ever attempted to tackle script writing before?

My major and my degree are in journalism, I specified in broadcast journalism (she came to the Coachella Valley 20 years ago to take a job as a producer at NewsChannel 3). And I had taken some creative writing classes in college but had focused on journalism. And then after college, I took some classes through various colleges on creative writing and specifically screenwriting because I did have an interest in that. But writing for screen and writing for live theater is very different.

How did you attempt to tackle this project?

I said to Se, why don't I just lock myself in a room for the weekend and see what I come up with? And if I can come up with something and you like it, and we start down this path liking the idea that I come up with, then I'll continue. But if it falls flat after a concentrated effort, then you can move on. And so, I did work for three days straight, 12 hours a day working on this play. And prior to that weekend, I did start doing a little research. And then that weekend I just really concentrated on a particular through line that I thought would be a good way to go with the show. And that kind of took the idea of the 1930s and ’40s slapstick movies, like the Road to movies with Bob Hope and Bing Crosby. I thought that would be a good way to take the audience through a story that these two leads ran into all these famous icons and legends of the community. 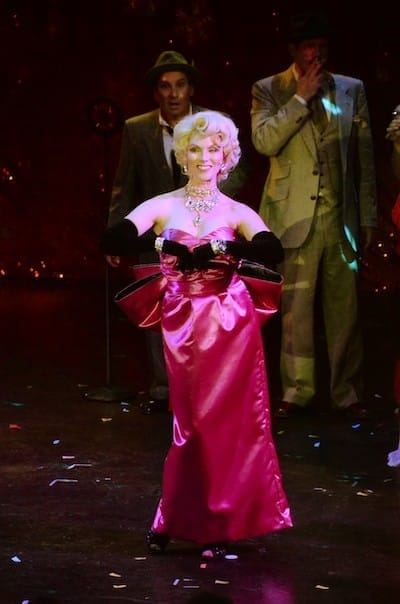 Any challenges picking that method?

We had to ask the audience to use their imagination as something spectacular takes them from one decade to the next. And there’s a line in the show that I just love, and I wrote it that first weekend, and it's still in the show today, and it says, "Should we tell them how we got from the ‘40s to the ’50s?” says one of them. And the other one says, “No, it's a complicated time, space, continuum, musical thing. You just have to go with it.” So, I think that’s what we ask the audience to do is just really have fun and enjoy what is in front of them watching a musical about so many great memories of Palm Springs and just be in the moment.

What did you extract from watching the “Road to” movies?

I've seen clips, and there's just things that stick with a person. I think I just had these little ideas in my mind. And then I did watch some of them specifically to get the groove and the vibe of how these stories go. And then one thing I noticed through my life is that sometimes the most ridiculous comedy is the best comedy. And you think to yourself, who would’ve even thought of that idea? Where does this come from? But you're cracking up in the audience.

What kind of liberties can you take with a musical based on historical facts?

It's not a documentary by any means. In our musical, we have a bunch of different celebrities at a party, whether they were together ever at a party situation like this or not is not important. But how Lucille Ball and Desi Arnaz look, that is important. There are different pieces that I feel like are important so the audience knows who we’re talking about and what period of history we’re talking about, and little historical tidbits.

I hope that people understand that, especially folks that are historians and want to teach about the history of Palm Springs, I hope that they realize that this is in good fun and that if people are interested in the history after watching this show, then maybe it will inspire them to do more research.

Did you come across any surprises in your research?

One of the things that I really learned, and actually someone from the Palm Springs Historical Society had told me this for years, but it wasn’t until I started researching it that I realized just what visionaries the women of Palm Springs were. Like Nellie Coffman and Cornelia White. And to read about how they were also great businesswomen and they saw Palm Springs as a destination in the late 1800s was actually really amazing. 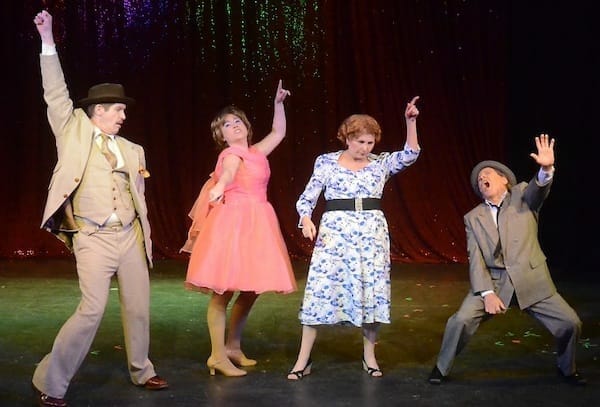 How do you know what to include and what to keep out?

Part of Se’s idea for this show that I love is that it would actually change every season. We would pull things out, put new things in, maybe spice up a scene in some way, add a new character, maybe remove a section. In December, audiences will see a slight variation compared to the January shows. In the December shows, we’re going to make it a holiday theme.

What did you learn from showing the musical for three weeks in March?

We really did have a good idea of what worked and what didn't. But what was really fun was working with Se and (co-writer) Eric Stein-Steele because we were reminiscing about the audience’s reaction to certain parts. And we were laughing, talking about the jokes that did work. And we did talk about a few that didn’t and figured out ways that we could rewrite them to where we think that they will work this go around. And we added a lot more silliness. And I think seeing that it worked, and we got the audience response from it last show gave me more freedom and liberties to feel okay about adding even more silliness.

• READ NEXT: Coachella Valley Firebirds and Their Coach Make Home Debut in December.