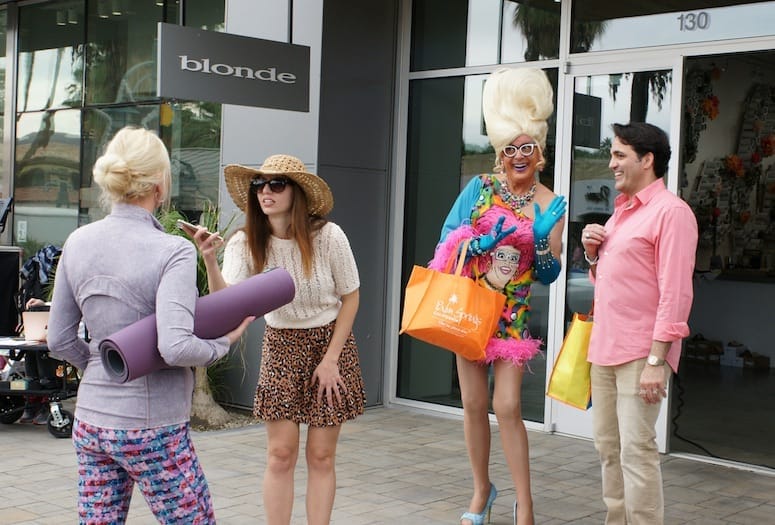 (From left) Daria Diache, Bella da Ball,  and Scott Khouri were part of the cast for Accidental Date, set to screen June 17 as part of a Palm Springs Women in Film and Television event.
PHOTOGRAPHS COURTESY KIM WALTRIP

When she least expected it in the middle of a pandemic, Kate Spates discovered the film producer in herself. And she wasn’t alone.

A collaborative effort by members of the Palm Springs Women in Film and Television organization’s Filmmakers Lab brought many self-discovery moments in creating a short film, Accidental Date, which was shot late last year in Palm Springs and will screen June 17 in an event open to the public at the Palm Springs Cultural Center.

Spurred by PSWIFT President Kim Waltrip, who describes Accidental Date as “a love letter to the city of Palm Springs about a Russian girl who comes looking for a date,” the film has been submitted to at least 20 film festivals including the Vancouver Independent Film Festival, San Francisco Indie Short Festival, and Sweden Film Awards, among others. 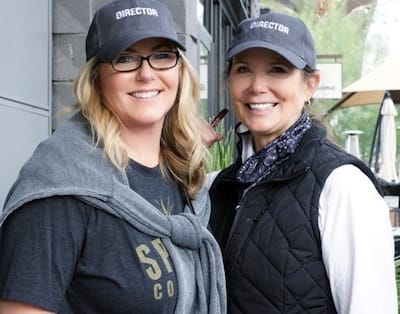 “Kim is just a ball of energy, who came into the organization asking the questions, ‘Have we ever made a film? Why haven't we ever made a film?’ And I think it had all of us scratching our heads,” Spates says. “I think it was excellent for women who had never had any experience, but were members and they just never had the opportunity to be on set and be involved. It gave us an insight and for some of us, it lit a fire under them to say, ‘I want to do more of this.’”

Carolyn Moloscho, a Coachella Valley writer who had never written a script based on someone else’s vision, brought Spates’ idea for the short film to life.

"It was quite a learning experience about working with others, collaborating, and having trust in your team,” Moloscho wrote in an email. “ I was fascinated by how the directors, Kim and Kate, brought the dialogue to life and flushed out the story from script to screen.”

Spates, who has dabbled in the film industry, says she was able to tap into those experiences and Waltrip encouraged her to follow her instincts. “That gave me the confidence to speak my mind,” Spates says. “And Kim gave me enough leeway to really speak my mind and put my own touches on some of the things that were meaningful to me.”

Andrea Carter also found herself taking her 20 years as a marketing professional that included TV commercial shoots in a new direction. “I think there are a lot of women in this area who have interest in TV and film, and we are not exactly close to the industry that's based in Hollywood,” she says. “None of us who have our careers based here are ever going to work on a short film or a film set in LA — but Palm Springs Women in Film & TV gave us the opportunity to do that here.”

PSWIFT Filmmakers’ Lab has already produced another short film, Aftermath — about a woman struggling with events from her past — set to also screen June 17. 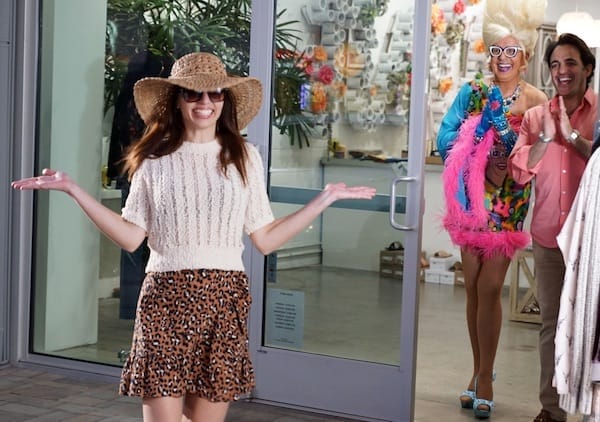 Palm Springs Life spoke further with Waltrip about the production and challenges the group faced while they produced Accidental Date during the pandemic. Waltrip has been acting, directing, and producing films since the late 1990s, including The Disappearance of Eleanor Rigby in 2013 starring William Hurt, Jessica Chastain, and Viola Davis.

When was your film shot? What impact did the pandemic have on the film, and what extra steps did you have to take to ensure everyone’s safety?

We started the Filmmakers Lab in February 2020. We already had agreed to a story and assigned roles. One of our members wrote the script for the movie and we were ready to go, but then COVID hit. Like everybody at that time, we weren't sure what we could do, or what we couldn't or shouldn’t do. We had to shut down and wait. In October we finally decided to go for it. We took all the precautions to be safe; we even had a COVID compliant officer on set. Everyone got tested and we made all the necessary arrangements to keep everybody safe. We shot the scenes in October, went through post-production and finished the film.

Why was it important to involve the Palm Springs Women in Film & Television organization in the film?

It's the first time our organization has done anything like this. We're just getting more involved in the true mission of what we're about. We're fostering new opportunities for filmmakers that are in our area, to be more involved in the industry, through our own creative projects. We're teaching our members how to make a movie, with actually making the movie. It is really hands-on training.

We have had a lot of panels, speakers and events. But we all are women that work in the film industry, so we decides let’s go and combine our knowledge and make something together. We had a blast working in the project. 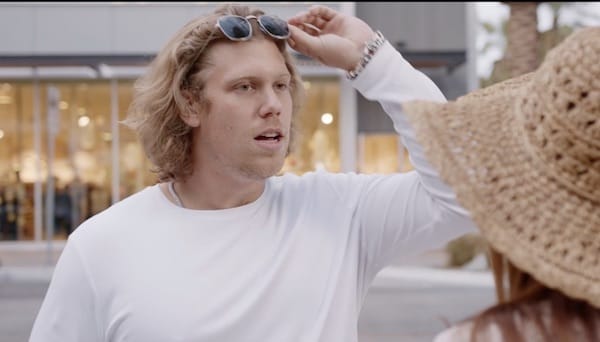 Actor Griffin Wade has worked in past projects with Kim Waltrip.

What were the rewards for doing the film by involving everyone?

Guerrilla filmmaking is tough. Everyone is wearing usually more than one hat, because we didn't have a lot of people in the production. It was challenging teaching people as we were actually filming, but everybody was on board. Our production designer actually had to stop traffic on the street during a shoot, because we were short-staffed.

We were all doing things like that and worked together. Overall, it glued the team together, because everyone took care of many different things. People could get a good idea of what's involved in film making and how difficult it can be sometimes.

Why was it a good story to put on film?

I think we wanted to do something about the city we live in. We wanted to showcase Palm Springs, and we wanted to show people in our community that it's a film-friendly town. We also wanted to highlight some of the businesses. It was easy for our people to actually be on location there as well. We couldn't trek out to the middle of nowhere. It was much easier for us to stay local. Not that we don't want to showcase other cities, and we will do that in our series. For this one, we wanted to make it as hassle-free as possible.

Were there any surprises along the way in filming it such as creating a new scene not originally written in, or did you stick to the script or allow some ad libing?

We didn't allow any ad-libbing. We decided to stick to the script. But the one challenge was there's a shot where the bus goes by. We didn't have the bus schedule. We had people looking out for the bus, and then we had to stop whatever we were doing, and our cinematographer had to run over and catch the bus, all within 30 seconds. That was kind of funny.

Is there a different vibe in the team when so many women work together?

I've worked with men and women, and the thing I love about women, not that men are not caring, but there's this loving humanity within the spirit of women that really comes out doing everything. We're very nurturing people. So everybody was taking care of one another. So it was very tender. 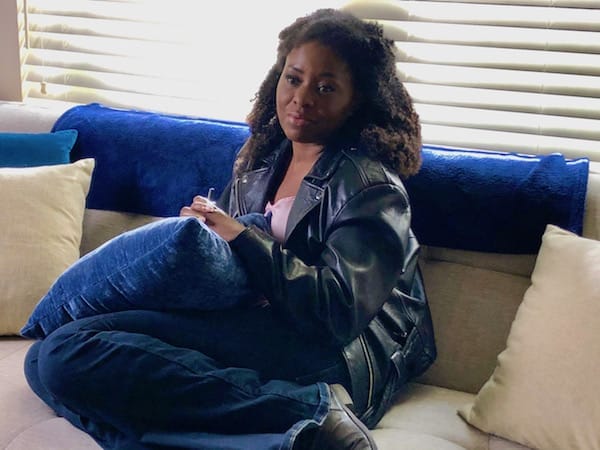 Jameelah Nuriddin stars in the second short film to screen on June 17, Aftermath.

What is your favorite scene in the film, and why?

I think one of my favorite scenes, like for filming, is where the actors are all in a circle. These two people are trying to get someone out of the way from her, and then he's trying to get in there. And the camera's in there as well, spinning in circles. That was fun to choreograph and to film. Then there is another scene, we had two people bumping into each other and pamphlets go flying. That was fun, too. It was challenging, to capture that in a way that it looks good in the film.

Do you have another project in the works?

We are working on a series. It is called a PS After Dark. We're filming on June 26-27. It's a half-hour show, starring actor Tristan Rogers. It is set in Palm Springs; it's like a VIP party. It's taking cues from “Playboy After Dark”, Andy Cohen's “Watch What Happens Live”, and Howard Stern's “No-Holds Barred Interviews”. There won’t be a topic that is going to be off limits. It's going to be so much fun. We'll have a diverse group of party-goers there. Tim Gross, who is the keyboardist and background singer for Rick Springfield, will be Tristan’s sidekick. He's going to be at the piano, and Tim will chat about the guests who are coming on the show.Then the doors will open, and their guests arrive, and they'll go into the interview - while everyone is partying.

Another project will be a series, called Dial Emme For Murder. It is based on Eileen Davidson's books. It's about a woman who is the No. 1 suspect in a murder case. She becomes her own detective to try to clear her name.

•READ NEXT: Splash House Returns to Palm Springs in August.