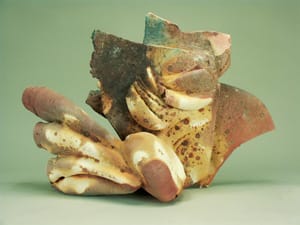 Ceramic art was hardly a new medium when Paul Soldner burst onto the scene in the mid-1950s. But Soldner, now 85, was a revolutionary: His genre-busting constructions were at the forefront of the West Coast Clay Movement and the modern Los Angeles art scene.

The result of his exploration was the birth of American raku. (The traditional technique involves throwing and bisque-firing vessels that are then glazed, placed in an open raku kiln, withdrawn, and plunged into water.)

Through Soldner, who had no aspirations to become a ceramic artist, raku became a strongly American art form. Soldner’s Zen-like philosophy spilled into his classroom, where he encouraged students to explore. He influenced many students, who developed careers of their own.

Edenhurst Gallery — which represents Soldner exclusively — shows works selected by David Armstrong, founder and president of the American Museum of Ceramic Art, which mounted a Soldner retrospective in 2004. Soldner has exhibited work throughout Europe and the United States, as well as Latvia, Japan, Taiwan, Korea, Canada, and Australia. He is also the author of numerous articles and a book (Kilns and Their Construction).

This article was originally published April, 2007 and updated for the web June, 2007.