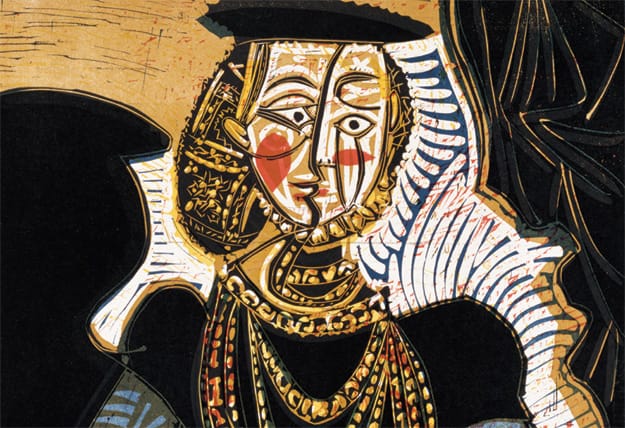 A towering, prolific talent, Pablo Picasso produced more than 20,000 works of art and mastered a number of media, including drawing, painting, sculpture, ceramics, printmaking, and illustration. In addition to creating such linchpins of art history as Les Demoiselles d’Avignon (1907) and Guernica (1937), Picasso invented Cubism and helped give rise to Surrealism.

This month, Heather James Fine Art in Palm Desert opens a significant survey of Picasso’s paintings, drawings, and sculptures from several major periods, including Cubism. The gallery will also feature an important private collection of 80 to 90 pieces of his ceramics. Although Picasso’s work has made appearances in the desert before, this show will be the largest to date.

Among the works on view will be a color linocut from 1958 titled Buste de femme (d’après Cranach le Jeune), or Bust of a Woman (after Cranach the Younger). Linocuts form a tiny portion of Picasso’s printmaking; he generally favored etching and lithography. But between 1958 and 1963, his residence in the south of France, away from the printmaking resources of Paris, led him to experiment with linoleum and produce many strong compositions. A postcard image of Lucas Cranach the Younger’s Portrait of a Young Girl inspired this print, an edition of 50. A powerful image with rich colors, evoking a blend of Cubism and classical portraiture, this piece is considered the most important of Picasso’s linocuts.

The nucleus of the show will certainly be the ceramic collection. The old art world hierarchy held that ceramics, a functional craft, was of lesser stature than the fine arts of drawing, painting, and sculpture. However, with the gradual breaking down of all strictures in the arts since the 1960s, this hierarchy has slowly become obsolete. In fact, ceramics is downright hip these days.

As the scholarship on ceramics practice has increased, so has the recognition of Picasso as a pioneer in the medium. A major 2004 traveling exhibition, Picasso and Ceramics, argued that Picasso was one of the most important ceramists of the 20th century — an artist who worked firmly within the traditions of the medium, and yet pushed it forward with an innovative, conceptual approach. The result is a body of work that is every bit as distinctive as Picasso’s paintings and sculptures.

An excellent example of Picasso’s ceramic work is Vase à la tête [Visage de profil], (Vase with Face), a four-sided white vase in an edition of 25, handmade by the artist. As the vase is turned, four images look out from its rounded surface, forming four “sides”: a smiling sun, a human face, a woman’s front side, and a woman’s backside. The piece is charming and whimsical, showing off its splendid curves and highlighting its function as a vessel.

The round platter or bowl seems to be a surface on which Picasso particularly delighted in tweaking pictorial possibilities. Plongeurs Fond Blanc (Divers in White), a convex wall plaque in an edition of 500 dated 1956, is a remarkable piece that depicts a group of divers lounging by a pool or a lake. A diver in mid-arch atop a platform echoes the curvature of the top rim of the plaque, while a diver lounging on the ground accentuates its bottom edge. In Picador, a bowl in an edition of 500 dated 1953, a horseman lances a bull’s neck as a toreador waits nearby. All three figures stand on a plane that lightly curves across the bottom of the bowl. On these objects and others like them, the formal possibilities of the piece are beautifully teased out, as a placid round surface is transformed into an arena filled with drama, action, and surprising complexity.