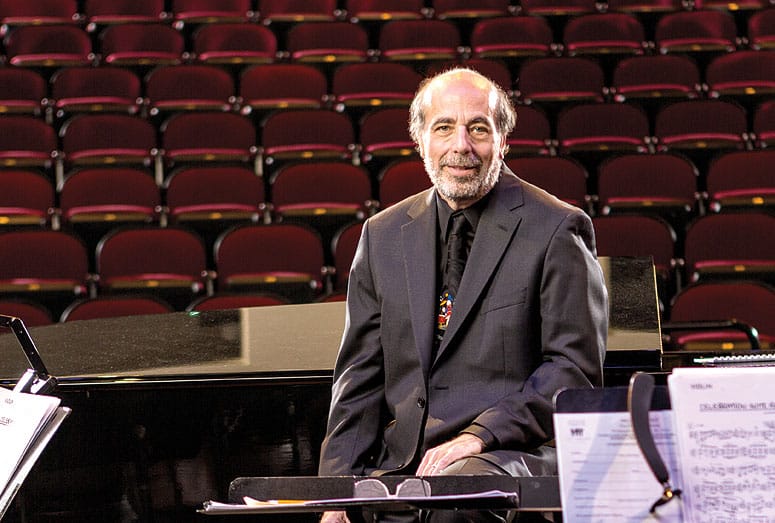 “I was never drawn to music,” concedes Desert Symphony conductor Gary Berkson. “When I was 4, my parents told me to sit down and play piano; I had no choice. They felt, for some reason, that I had musical talent.” But Berkson’s love of music — which he credits to an inspirational instructor of 14 years — eventually harmonized with his innate talent for the craft.

A native of Southern California and graduate of The Juilliard School of Music, Berkson spent three years with the Greater Miami Opera before moving to Europe. There, he played piano and conducted for such companies as the Dutch National Ballet and Royal Swedish Opera and performed various genres for festivals in Germany, Bulgaria, and Norway.

“After 30 years, I came back to the U.S. to repay a debt,” says Berkson. “I had taken all of that training from my many instructors here — when I was learning to become a pianist and conductor — and left with it. I felt a private obligation to return to the country and repay that debt. “And, Sweden gets cold in the wintertime,” he adds. “So I thought it would be nice to have some warm winters.”

What were your own career ambitions while your parents authoritatively paved your path as a musician?

I never saw myself as a musician. My goal was to become a theoretical mathematician. But then when I was at university — this was a couple of years after we landed on the moon and there was a lot of talk about dismantling the space program — I figured, I really can’t stand on a street corner with a slide rule doing calculations for a quarter … but if I can’t get a job someplace as a musician, at least I can play in a bar!

To me, playing piano meant spending eight hours by myself each day, practicing. But as a conductor, I was freer to do things like symphony, ballet, and opera, and even Broadway musicals.

What genres does Desert Symphony cover?

Mostly classical music when it began. About 10 years ago, when it moved into the McCallum Theatre and needed to find a broader audience, the shift was made toward popular music — from jazz to big band to country-western to Broadway. That seems to be the niche that the audience wants, and, of course, the orchestra is there to exist for the audience.

How many members make up the symphony orchestra?

We have about 40 to 65 tenured players — [in their] 30s to 80s — from all over Southern California. The number we use in a performance depends on the needs of the guest artist or program.

How did you choose Michael Bolton as the headliner for your 25th–anniversary gala?

We wanted to find an artist who had tremendous name recognition, someone attractive to a wide audience in the valley. Michael Bolton fills those qualifications up to the sky … and he said he’d love to do it!

What is your favorite Bolton song, and can you provide a sneak peek at the set list?

I’m your typical classical conductor: When anyone asks what my favorite song is, I say, “It’s the one I am doing now.” I actually love all of his music … and I haven’t seen the set list, so it’s a surprise for me, too, at the moment.

Ah, I love country-western music, so that puts me at Stagecoach. … But my [stepson’s] girlfriend, a musician from Sweden, plays at Coachella, so we’re waiting for a re-invite. They’re different weekends, so I could do both.

What is special about Desert Symphony’s Youth Outreach program?

Last year, we started a program with the Boys and Girls Clubs of Coachella Valley [in which] we go into their after-school classrooms with a string quartet and play and talk about music and how it’s produced.

You can learn about animals by watching an IMAX film — or you can go to The Living Desert and touch and be close to the animals. It’s the same with music: It’s one thing to see an orchestra onstage but another to have the musicians in front of you and to see what the demands are to produce a sound out of these instruments. It’s an open forum that really involves and educates students.

You’ve performed for various royalty, prime ministers, and presidents throughout your career. Who was the first, and was there greater pressure?

I don’t know if it was the prime minister of Sweden or Queen Elizabeth II — it was the same event — but it was in the early 1980s. I don’t get nervous or stage fright.  Of course, it’s a thrill to meet these people and it’s an experience I cherish, but in the moment of the performance, I don’t think about who’s out there, just about what I am doing, whether it’s for a crowd of 25 or 25,000.

What do you envision for Desert Symphony’s future?

I would hope for at least 25 more years! Throughout the U.S., there are many arts organizations that are having tremendous difficulties, and many have had to cut back or have gone out of business. This is a shame because I think we need the arts, especially music, to enrich and fulfill our lives and take us away from all of the bad things that are happening in the world or the ups and downs of the economy. I hope that no matter what kind of performances [the symphony does] in the future, we continue to exist and make a difference in peoples’ lives.