The Potash Twins, Adeev and Ezra, released their recent album, Hornography, this week and features inspired by their move to Palm Springs at the start of the pandemic.
PHOTOGRAPHY COURTESY THE POTASH TWINS

But that wasn’t their last impression.

“But when you get here, it’s the most beautiful place on earth. I totally get why people live here,” Ezra notes.

“It has an identity that everyone knows all around the world,” adds Ezra. “There is so much about Palm Springs that has reverberated throughout the entire world. That is very powerful for such a small community.”

The Potash Twins explored buying a weekend escape in Palm Springs due to its proximity to Los Angeles where their recording studio is located. But when the pandemic hit, Palm Springs became The Potash Twins' full-time residence and the perfect setting to finish their latest album, Hornography, which releases May 3. 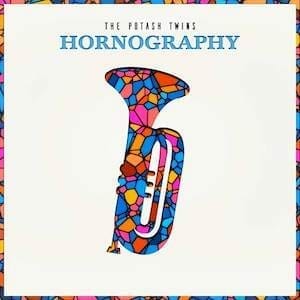 “The time couldn’t have been better,” says Ezra. Adeev agrees. “We love it here. It is an easy place for us to be creative, write music, and make recipes.”

The Potash Twins may be hard to tell apart, and often finish one another’s sentences, but in a short period of time they have managed to command stages in both music and food. Adeev is the master on the trumpet while Ezra is equally comparable on the trombone in a collaborative style that mixes hip hop, jazz, trap and pop. In the kitchen, The Potash Twins have hosted their own shows on Bravo and the Food Network

The Potash Twins' album features original spoken word elements from Terry Crews, Andrew Zimmern, Katie Maloney and the late Bob Saget, and musically features Grammy Award winners Robert Glasper, Cory Wong, and Jazz Cartier. Ezra says many of the album’s tracks were inspired by their time in the desert (including a week in Joshua Tree).

Palm Springs Life chatted further with The Potash Twins about their music, their inspirations, and their second career as chefs.

How would you describe The Potash Twins music? Who or what influenced your music over the years?

Ezra: I would say our music is the answer to the question of where horns fit in the modern musical landscape. We've performed with a lot of people. When we were growing up, we were inspired by Louis Armstrong, Chet Baker, Miles Davis, Wynton Marsalis. These huge figures on the horns, trumpet. John Coltrane for saxophone. But our friends didn't listen to jazz. We were good at jazz, but it almost didn't even matter because it wasn't their music of choice. We always wanted to gear our music toward a wide audience. Something that jazz musicians and jazz listeners would like, but also anybody else would listen to and not be deterred by it.

Ezra, Addev: I would just say, as we've grown, we've tried to make it like, as an equilibrium of the two. Enough jazz influence that we really love playing it. People that appreciate jazz will appreciate this as well. But enough other influences that are not so jazzy that people hear it and keep on listening, if they don't like jazz.

Was there ever a time when the either of you thought of changing instruments, and why were the trumpet and trombone a good fit for your music?

Ezra: Oh my God, I loved playing tuba. It had such an important role in the grand scheme of an orchestra or a band, especially when you talk about New Orleans influenced jazz. But it has an issue with connecting with people, it's on such a low frequency that people kind of tune it out. I thought, Is there another instrument that I could play? I picked up the trombone. I learned it in one week, and I realized that it was the instrument for me. There was no doubt in my mind, and I’d never turn back. 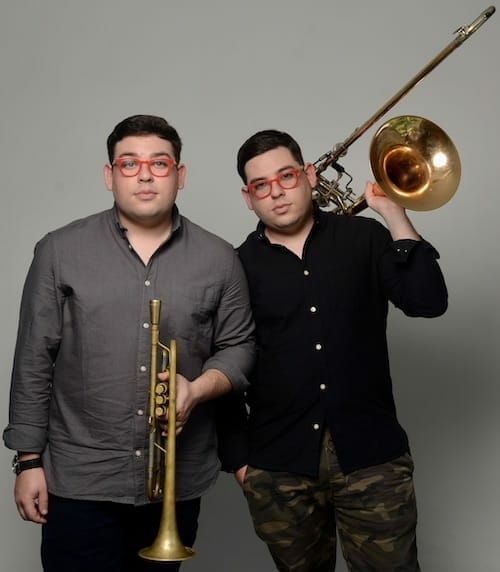 What was your inspiration when writing songs for the new album?

Adeev: I would say the main inspiration for this particular album was the question of where horns go today. Another inspiration was that throughout our entire life, we've always been given words of wisdom by all of our friends and mentors. Half of them were musicians, and the other half not.

We wanted to have the words of wisdom element from all of our friends that weren't musicians in there, but in their own words. We obviously have spoken word elements in the album as well.

Two years of basically complete isolation during COVID was really hard for musicians. Especially for horn players. Being jazz musicians, we improvise based of what other people are doing, we are reacting to their play. We wanted to make sure that collaboration was the thing we were doing with this album. We didn't want to exclude our friends that weren't musicians to do that with us.

You have collaborated with a variety of musicians and performers. How important was that to your development and how did those connections happen?

Adeev: We have a really interesting perspective, because we've played with a lot of people, and we've watched how they interact with their audiences, whether that's Wynton Marsalis in a jazz club setting, or Diplo for a 100,000 people.

Adeev: When playing with them, we are not right in front of the stage, we're right behind them. We do see an interesting view from our position. We picked up a little bit of everything that makes them excellent and pooled it into our thing. This is not only inspirational for us, but also is maybe the way to do it, because we get to see so much of so many different people. I would say, John Legend is a class act from beginning to end, incredibly and talented human being, incredibly nice person, a really cool guy.

It was very sad news when we lost Bob Saget earlier this year. He narrated the outro on Hornography. How did you connect with Bob?

Adeev: We met Bob and his wife, Kelly, when we first moved to LA through a friend of ours, Dave Koz, who's a saxophone player. We hit it off with Bob and Kelly immediately. Kelly is an amazing person who has a huge passion for music and food, and that's obviously something that we do. It was just kind of a natural fit for us and them to talk about these things that were important to us. Bob was such a lover of music. All of his friends were musicians, like John Stamos plays drums and guitar. Bob played guitar himself. Bob was really good friends with John Mayer. His whole world was a lot about music. I think a lot of people knew that, but maybe not everybody. We were really excited to ask him to do it.

Ezra: The way Bob was, he was like everybody's mentor. If you were in his sphere, he would take care of you, that's just the way that he was. Someone in our family was diagnosed with scleroderma. We didn't know that Bob was the president of the National Scleroderma Foundation. When he found that out, he said, "I'm going to take care of everything." He sent emails, texts, and called helping us. For the last two or three years, we were trying to figure out what project we were going to do together. We had a couple of opportunities, but with COVID, it didn't really work out. Then when we asked him if he would do the album, and he was really, really, really excited to do it. A portion of the album proceeds are going to the National Scleroderma Foundation in honor of Bob. 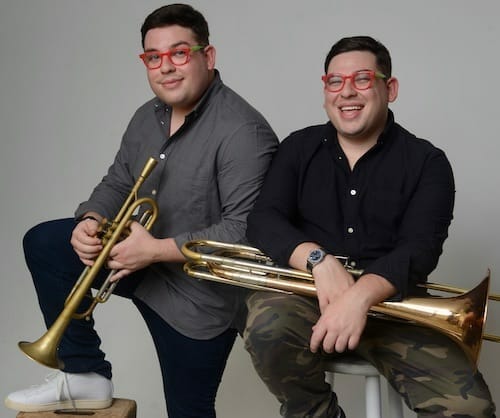 You’ve appeared in your own food shows on the Food Network and Bravo. How did food become a logical extension of what you do musically? Do you come from a foodie family? What influences did that play in your food choices.

Ezra: Absolutely, we do this every day.

Adeev: Yes, to everything. Obviously, as musicians, we're traveling a lot. When we are somewhere, the only way we can really experience the culture is through either the music or the food.

Ezra: We kept kosher our entire lives until we were 15.

Adeev: With our career we are traveling all over the world. This is another really great way for us to relate and connect through the food. When we get back, we try to recreate those recipes. Generally, you can't really get everything everywhere, especially in Nebraska. But in New York you could, in LA, for the most part as well.

We just got a following in the food world through our music. At one point, we met Andrew Zimmern, who had a big Travel Channel show called Bizarre Foods. After a year of convincing, he asked us, "Well, what if I sold something, would you do it?" We're like, "Yeah, probably different story if you sold something." That's how the Travel Channel show happened. From there it just snowballed into a bigger passion for us.

Ezra: We didn't realize that we touched a nerve with people. Because clearly, a lot of people were thinking about music and food, and the intersectionality of the two. That's how we approached everything anyway, just by the DNA of who we are. When that show came out, other networks were immediately interested and asked us, "Well, would you do that, but more like this for our audience?" And we were like, "I could see that working actually really well."

Adeev: I mean, the way that you create a dish is basically the same way you write a song. You're cognizant of the exact same things in each one — texture, harmony.

Adeev: What balance, what do you want to taste first? What do you want to hear first? Then the way you run a band is the same way you'd run a commercial kitchen. We say it's like a pirate ship, it's not necessarily a democracy. A lot of people are working for one common goal, but there's a direction, an artistry, and there's craftsmanship to it. For us, it was like speaking the same language.

Growing up, how often were you mistaken for the other, and did that become an opportunity to prank on people?

Adeev: Growing up, I'd say it's definitely still happening. I don't want to go into too much detail, but there were tons of schemes.

Ezra: Especially in high school, for sure.

Adeev: Especially in high school, where we would be in each other's classes and stuff.

Ezra: Maybe every now and then, one of us would take a test for another one of us.

Ezra: That's the first time I think we've ever been asked that.

Adeev: I would say at first it was jazz. Performing with some of the greats in jazz was 100 percent what we wanted on our bucket list. Then it went into food, and I would say getting to do food and travel shows was a dream goal. Moving to LA, and recording and performing with some of the best people in the music industry is definitely one, how can you want more than that?

Ezra: Having said all those things, it is formulating our identity and showing people who we are. Because it's like, we've done a lot of really fun things. Now, we feel like it's our time to make our mark, I would say.