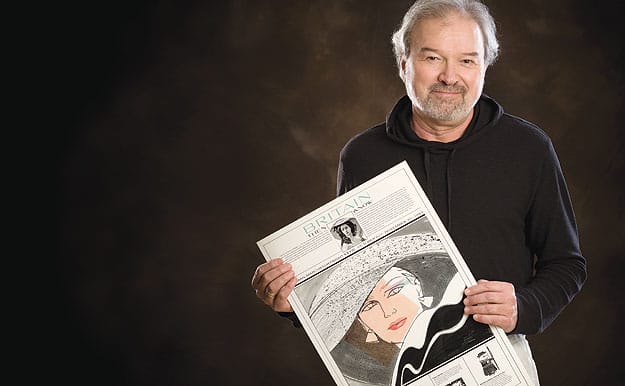 Philip French sketched couture for Neiman-Marcus ads from 1966 to 1971. He became the iconic store’s art director (1982-86) and traveled to Paris, Milan, and New York for fashions shoots. His work is part of the collection of Museum of Fine Arts, Boston. A Palm Springs resident, French owns about 200 ad slicks from the late 1950s to 1980s, many from the archives of Art Shipman, former Neiman-Marcus creative director.

How did you begin sketching fashion?
At 12, I was determined to be a car designer at General Motors. At 14, I packed my sketches and sent them to GM. They returned them with the suggestion that I go to high school and then apply to their institute of technology. … Later, at Chouinard Art Institute, I ended up in a fashion illustration class. Theadora Van Runkle [who later did costumes for Bonnie and Clyde and other films] thought I had a natural thing for fashion. Edith Head saw my work at a student exhibition. They were very encouraging.

You worked at Neiman-Marcus when there were only three stores in Dallas and Stanley Marcus helmed them. What was he like?
He was much admired in the retail community. They called him “the merchant prince.” He had the most extraordinary taste. Neiman-Marcus was the first store to have Godiva chocolates. He also brought in Dr. Erno Laszlo, and the store once exhibited collages by Gloria Vanderbilt.

Did you draw the fashions from photographs?
There were four of us, and we each hired our own model, who we had for eight hours a day. They would pose in an outfit for 20 minutes while we sketched. One Galanos dress came in and, when the model put it on, everyone went wild. Three of us did a series of sketches of the dress, which ran in an ad as a grid with our various versions.

What was a highlight of shooting photographs  as art director?
Neiman-Marcus was the first store to shoot in Coco Chanel’s Paris apartment. She was dead then, but the apartment had been preserved. While awaiting a model’s arrival, I realized I was sitting on the suede sofa where Churchill and Picasso and Marlene Dietrich had sat. After a while, I got up and looked at the bookshelves and found a hand-drawn book signed to Coco from Jean Cocteau.

What about the runway shows?
I preferred standing outside watching the socialites arrive. In Paris, we rode around in a van and sometimes had to do photo shoots in the rain. We didn’t know what the buyer would select from the collections, so we may have only two hours to shoot it. At the end of each day, I had as many as 10 rolls of slides to edit, because when I got back to Neiman-Marcus, I had to hit the ground running.