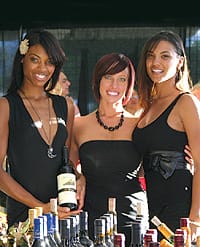 Your typical wine tasting involves sampling a handful of wines. You may find a chardonnay that rocks your boat or a syrah that sends you to the moon — or you may not care for any of them. But try a hundred wines and if you can’t find something you really like, well perhaps you should switch to beer.

The question is how you can compare an abundance of wines without spending a ton of money and a month of Sundays.

The answer is around the corner: The Art of Food & Wine, which unfolds Nov. 8-11 in Palm Desert. Perhaps the best part about the second iteration of this enjoying-the-good-life event is that the Grand Tasting — when attendees can try wine after wine after wine — is being extended to two days. Not only does this allow tasters to give their palates an overnight break, but also allows them more time to enjoy the concurrently running cooking demonstrations, live music, and food offerings. As two high-spirited cowhands belt out a melody called “Poor Jordan’s Head,” Rosemary Mallett sits in the audience slapping her knees, clutching her gut, and trying desperately to catch her breath in between long bursts of laughter.

A satirical adaptation of “Pore Jud is Daid” from Oklahoma!, the lyrics include an exchange the students — Matt Kaminsky and Jordan Leigh — had with Mallett in which she berated them for not knowing their lines during a rehearsal for a 1991 production of the musical.

The row — all in a day’s work for Mallett — was one of many memories that served as fodder for a grand retirement send-off to the teacher that generations of students have affectionately called Drama Mama. Billed as the Alumni Musical Revue, the production brought Mallet together with former and current students, parents, and associates feting her storied run as head of the Palm Springs High School Theater Department.

Because the alumni had dispersed to far-reaching areas of the nation, cast and crew were afforded only two rehearsals, one a few hours before curtain.

“They’ve been doing theater for so long and the fact that they’re not kids anymore — they’re professionals — allowed them to put on a real class act,” Mallett says.

In the 26 years that she taught theater, Mallett inspired — or, perhaps, as she would say, cajoled — generations of young people to get excited about theater. A significant number of them went on to pursue professional careers in the trade. Some like Kaminsky (Boston Legal, Scrubs, Without a Trace), Leigh (I Love You, You’re Perfect, Now Change; My New Wild Life), Jonathan Fidler (Crossing Jordan, Numb3rs, Mad TV), and Paige King (Noises Off) became television and stage actors. Others became writers and producers, including Jon Schroeder (The Jimmy Kimmell Show) and David Thomsen (EXTRA, The Rachel Ray Show; The Tyra Banks Show) or teachers of music and drama, such as Denise Scams and Julann Warren, who co-directed the revue with Kaminsky.