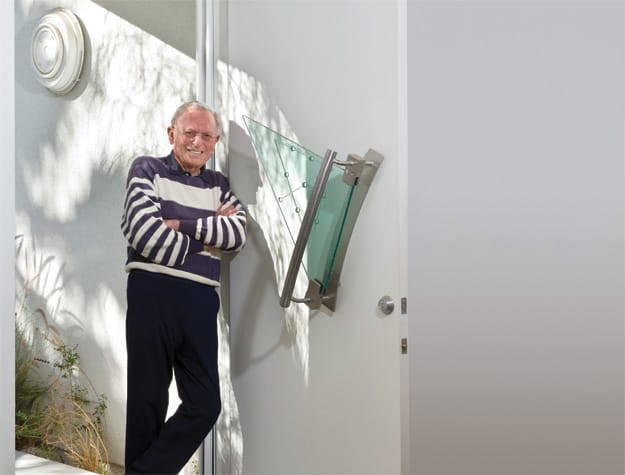 This puzzle set Harry Newman on his life’s path when he was a boy: Connect a square of nine dots with four lines without raising your pencil off the paper. When he solved the puzzle, he understood the fallacy of self-imposed limits and that “you can go outside the square.” Nine dots mark his front gate; nine dots with the solution engraved in glass mark his front door. And the concept marks everything he does.

Newman started his career as an architectural engineer and illustrator in Chicago. In addition to high rises in the Windy City, his designs include A&M Records in Hollywood, custom houses for people in the entertainment industry, and his own residence in Palm Springs — a house with rooms, but no floor-to-ceiling walls that famed photographer Julius Shulman lauded as “an illusion.”

Your house contains midcentury modern attributes, yet it’s clearly contemporary. What do you call your style?

American Renaissance. I am a person who studies concepts; I don’t copy details. I just am able to put things together that other people don’t. For example, the [entry] floor is OSB board; it’s not what people would use for a finished floor.

How did you get involved with the entertainment industry?

I went to a printer to blow up a rendering. He was friendly with someone who wanted to build a recording studio. I knew nothing about recording studios, but I got some books and studied things like how to capture bass sounds. It was very modern and clean, with felt panels. Herb Alpert saw it and loved it. He called and invited me to come to A&M Records to remodel their studios. I also did their offices in New York and Toronto. I met movie directors and rock stars.

For what celebrities have you designed houses, and who made the best client?

Steven Spielberg [two houses], Meryl Streep, and Bruce Willis and Demi Moore [Malibu and Hailey, Idaho], as well as Brad Grey, the chair and CEO of Paramount Pictures. Steven was the best client, because he finds very good people and then leaves them alone. He never came until the house was totally finished, because he wanted to have the enjoyment of seeing it done.

What’s the most unusual idea you’ve had?

I have a patent on a high rise with living-space pods that can be detached and carried by helicopter, so you can relocate without having to move out of your home. When I presented it to Kaiser Industries, they thought it was spectacular but said interstate commerce would be a real problem. At the end, one guy said, “It’s too bad Henry J. [Kaiser] isn’t still alive, because he would have loved this.”